That's part of the creative title of a seminar that Arnaud Martin, assistant professor of biology, George Washington University, Washington, DC, will deliver next week to the UC Davis Department of Entomology and Nematology.

CRISPR is an abbreviation for Clustered Regularly Interspaced Short Palindromic Repeats. Definition: Segments of DNA containing short, repetitive base sequences in a palindromic repeat (the sequence of nucleotides is the same in both directions).

"He is doing some really cool work investigating the mechanisms underlying wing patterning in butterflies using CRISPR to knock out genes that regulate those mechanisms," said Attardo, who noted that the seminar was initially scheduled for 4:10 p.m., Wednesday, Oct. 17 but was changed to noon, Friday, Oct. 19.

Martin, who researches the evolutionary and developmental genetics of butterflies and moths, was recently quoted in a Washington Post article (Sept. 19, 2017) titled "Mutant Butterflies Reveal the Genetic Roots of Colorful Wings."   Reporter Ben Guarino wrote: "Engineered mutant butterflies give a glimpse deep into the genetic roots of wing patterns, an international team reported Monday in the Proceedings of the Natural Academy of Sciences. The authors of the new study rearranged colors on butterfly wings by deleting a single gene using a genome editing tool called CRISPR. The gene's absence had a dramatic effect in sever butterfly species, including some that aren't closely related."

"We use butterfly wing patterns as a proxy to understand fundamental rules about the function of genes," Martin told Guarino.

About his UC Davis talk: "Understanding the generative mechanisms of morphological diversification requires the routine manipulation of genomes in a comparative context," Martin says. "I will present how current work using CRISPR mutagenesis has allowed to decipher developmental mechanisms behind  the diversification of a spectacular of morphological radiation: the color wing patterns of butterflies. These experiments illustrate how evo-devo can delve into the genome-to-phenome relationship at different taxonomic nodes, from population levels to more macro-evolutionary scales. I will discuss this principle in the broader context of GepheBase (www.gephebase.org), a database of known genotype-phenotype that compiles from the literature more than 1600 allele pairs across all Eukaryotes."

Martin received his doctorate in biological sciences in 2010 from UC Irvine (thesis: "The Developmental Genetics of Color Pattern Evolution in Butterflies.") He then did postdoctoral research at Cornell University and UC Berkeley before joining the Department of Biological Sciences at George Washington University in January 2016.

He's the principal investigator on a $414,266 National Science Foundation grant (2017-2020) on "Collaborative Research: cis-Regulatory Basis of Butterfly Wing Pattern Evolution," and  co-author of a research article on "CRISPR/Cas9 as the Key to Unlocking the Secrets of Butterfly Wing Pattern Development and Its Evolution," published in December 2017 in Advances in Insect Physiology.

The abstract: "With the exception of a few moth and butterfly species, gene-editing tools in Lepidoptera have been lagging behind other well-studied insects. In order to elucidate gene function across the order, it is necessary to establish tools that enable such gene manipulation. CRISPR/Cas9 is a promising technique and here we review the recent progress made in implementing the technique in butterflies; from broad patterning of the wing, to the development of specific colours in particular wing sections, to eyespot formation. The often species-specific responses to the CRISPR/Cas9-induced mutations in candidate genes, underscore the significance of these genes in the wide evolutionary diversification of butterfly wing patterns. We further discuss potential caveats in the interpretation of the resulting mutant phenotypes obtained through CRISPR/Cas9 gene editing. Finally, we discuss the possibilities CRISPR/Cas9 offers beyond mere knockout of candidate genes, including the potential for the generation of transgenics that will further elucidate the developmental genetic basis for wing pattern evolution."

Attardo says the seminar will be recorded and posted at a later date. 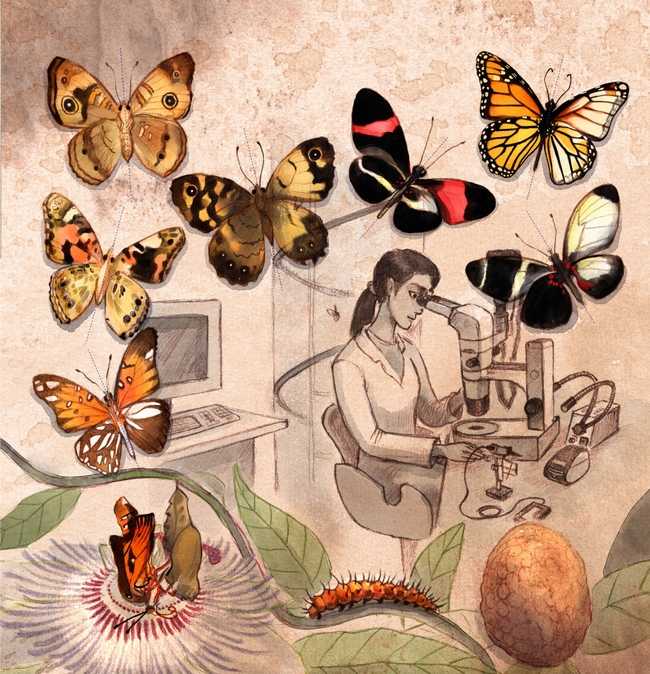 Butterflies showing mutated wings on their right sides. This image was used in one of Arnaud Martin's research publications. (Credit: Nathalie Vessillier)
Focus Areas:
Focus Area Tags: Agriculture, Environment, Innovation, Natural Resources
Tags: Arnaud Martin (1), butterflies (79), CRISPR (1), Geoffrey Attardo (20), George Washington University (1), knock-out genes (1), UC Davis Department of Entomology and Nematology (463)
Comments: 2
Comments:
by Fay
on October 13, 2018 at 5:06 AM
This is so fascinating! Science is amazing and we have no idea where our genes may take us!
by Win L Rogers
on October 15, 2018 at 8:54 AM
Wow! So interesting!
Leave a Reply: