Bug Squad
sitenum=63
Happenings in the insect world
Those Iconic Monarchs: Treats on Halloween and Every Other Day

It's Halloween and scores of trick-or-treaters are donning monarch butterfly costumes.

But they can't do justice to the living monarchs, those iconic, majestic butterflies that are always dressed in Halloween colors: black and orange.

It's always a treat to see them but they have to avoid the "tricks"--predators and parasitoids.

Among the last monarchs we reared in September: a brightly colored female, healthy and strong and rarin' to go.

Where is she now, on Halloween? Is she overwintering in Santa Cruz or Pacific Grove? Or, did a predator, perhaps a California scrub jay or a praying mantis, nail her?

We don't known "witch" way she went, but as she fluttered away, we wished her "Safe travels!"

It's been a troubling year for monarchs, Danaus plexippus, according to butterfly guru Art Shapiro, UC Davis distinguished professor of evolution and ecology, who maintains a research website, Art's Butterfly World. "I have not seen a wild egg or caterpillar of the monarch this entire calendar year at low elevations," he said Sept. 6, 2018 during an interview on the "Insight with Beth Ruyak" program, Capital Public Radio, Sacramento. "Not one." (Listen to the interview.)

Where to see the overwintering monarchs in California?

"The last few years have witnessed low numbers of butterflies throughout the region compared to the late 1990s, but there are still many places to view overwintering monarchs and get involved!" 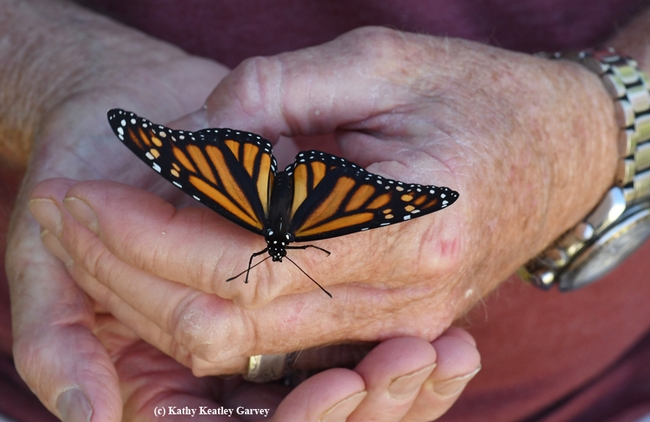 A newly eclosed monarch, ready to take flight. This image was taken on Sept. 24, 2018 in Vacaville, Calif. (Photo by Kathy Keatley Garvey) 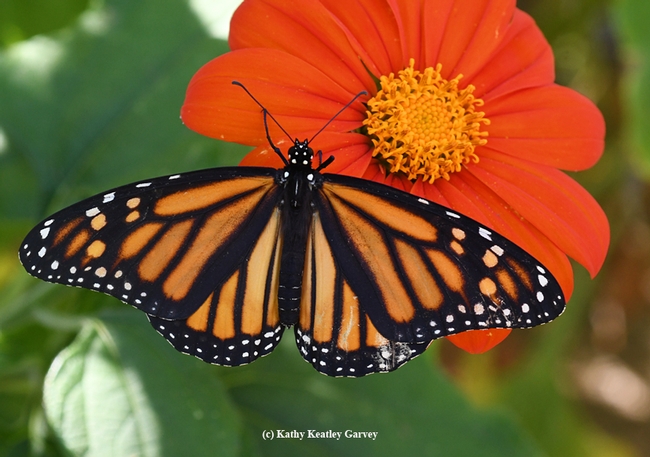 Spreading her wings on a Mexican sunflower (Tithonia), the newly released Monarch is about to take flight. (Photo by Kathy Keatley Garvey) 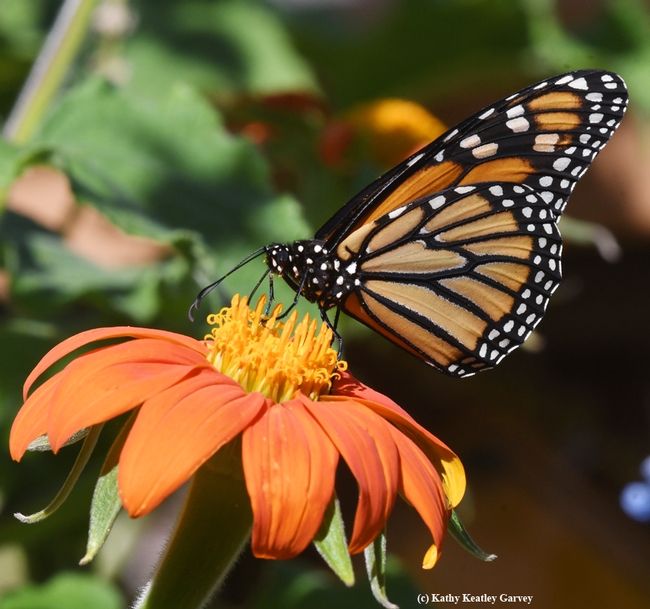 A monarch sips nectar from a Mexican sunflower (Tithonia). (Photo by Kathy Keatley Garvey)
Focus Areas:
Focus Area Tags: Environment, Natural Resources, Yard & Garden
Tags: Art Shapiro (211), Halloween (9), Mexican sunflower (49), monarch butterfly (25), Tithonia (58), UC Davis (189), Xerces Society for Invertebrate Conservation (9)
Comments: 2
Comments:
by Jo Nichols
on November 5, 2018 at 6:28 PM
IF the caterpillar I discovered today were to make it to adulthood IN MY HOUSE , can I release it at one of the viewing sites like Natural Bridges in Santa Cruz? Or maybe I’d release it nearby! I will only try cutting the milkweed stalk with a chrysalis attached if temp outside gets too low.
by Kathy Keatley Garvey
on November 8, 2018 at 9:17 PM
Some of my monarchs hitched a ride to Natural Bridges! I like to think they survived to produce another generation!
Leave a Reply: