Page, a UC Davis alumnus whose administrative career took him from chair of the UC Davis Department of Entomology to provost of Arizona State University, is the recipient of the 2019 UC Davis Distinguished Emeritus Award.

Nominator Steve Nadler, professor and chair of the UC Davis Department of Entomology and Nematology, said “Robert Page is arguably the most influential honey bee biologist of the past 30 years." The award, administered by the UC Davis Emeriti Association, honors outstanding scholarship work or service performed since retirement by a UC Davis emeritus.

Page will receive the award--a plaque and a cash prize of $1000--at a luncheon hosted by Chancellor Gary May on Monday, Jan. 28 in the UC Davis Conference Center.

Page, who received his doctorate in entomology from UC Davis in 1980, joined the UC Davis faculty in 1989 and served as the chair of the Department of Entomology from 1999 to 2004, the year he gained emeritus status and the year Arizona State University recruited him for what would be a series of top-level administrative roles. He continues his research, teaching and public service in both Arizona and California, but now resides in California, near Davis, with his family. Robert E. Page Jr. joined the UC Davis entomology faculty in 1989. This photo is from 1998.
At UC Davis, he maintained a honey bee-breeding program for 24 years, from 1989 to 2015, managed by bee breeder-geneticist Kim Fondrk at the Harry H. Laidlaw Jr. Honey Bee Research Facility. They discovered a link between social behavior and maternal traits in bees. Their work was featured in a cover story in the journal Nature. In all, Nature featured his work on four covers from work mostly done at UC Davis.

His work has garnered a significant impact in the scientific community through his research on the evolutionary genetics and social behavior of honey bees. He was the first to demonstrate that a significant amount of observed behavioral variation among honey bee workers is due to genotypic variation. In the 1990s he and his students and colleagues isolated, characterized and validated the complementary sex determination gene of the honey bee; considered the most important paper yet published about the genetics of Hymenoptera. The journal Cell featured their work on its cover. In subsequent studies, he and his team published further research into the regulation of honey bee foraging, defensive and alarm behavior. Rob Page as a doctoral student at UC Davis. He received his doctorate in entomology in 1980.
In addition to his pioneering work on the first genetic map of any social insect--demonstrating that the honey bee has the highest recombination rate of any eukaryotic organism mapped to date--Page was personally involved in genome mappings of bumble bees, parasitic wasps and two species of ants. His most recent work focuses on the genetic bases to individuality in honey bees; demonstrating genetic links between pollen and nectar collection, tactile and olfactory learning characteristics, and neuroendocrine function. This work provides the most detailed understanding to date of the molecular and genetic bases to task variation in a social insect colony.

He has authored than 250 research papers, including five books: among them The Spirit of the Hive: The Mechanisms of Social Evolution, published by Harvard University Press in 2013. He is a highly cited author onsuch topics as Africanized bees, genetics and evolution of social organization, sex determination, and division of labor in insect societies. His resume shows more than 18,000 citations

Born and reared in Bakersfield, Kern County, Rob received his bachelor's degree in entomology, with a minor in chemistry, from San Jose State University in 1976. Following his doctorate from UC Davis in 1980, he served as assistant professor at The Ohio State University. He joined the UC Davis entomology faculty in 1989 as an associate professor and began working closely with Harry H. Laidlaw Jr., (the father of honey bee genetics) for whom the university's bee facility is named. Together they published many significant research papers.

In 2004, Page was recruited by ASU as the director of the School of Life Sciences of Arizona State University (ASU). He organized three departments--biology, microbiology and plant sciences, comprising more than 600 faculty, graduate students, postdoctoral fellows and staff--into one unified school. As its founding director, he established the school as a platform for discovery in the biomedical, genomic and evolutionary and environmental sciences. He also established ASU's Honey Bee Research Facility.

Page's colleagues laud his strategic vision, his innovative leadership, and his stellar contributions to science.

James R. Carey, distinguished professor of entomology at UC Davis, who continues to work with Dr. Page on research projects, describes him as "one of the most gifted scientists, administrators, and teachers I have had the privilege to know in 30 years in academia.”

Colleague Bert Hoelldobler, an ASU professor of life sciences, said Page is “the leading honey bee geneticist in the world. A number of now well-known scientists in the U.S. and Europe learned the ropes of sociogenetics in Rob's laboratory.”

Bee breeder-geneticist Susan Cobey, former manager of the Laidlaw facility and now of Washington State University, praised Page's major contributions to the beekeeping industry, including the Page-Laidlaw Closed Population Breeding Theory. This has offered a practical system of stock improvement for honey bees, used worldwide, she said. “It's a challenge, as the queen mates in flight with numerous drones and selection is based upon complex behaviors at the colony level, influenced by the environmental.” She has applied this theory throughout her career, developing and maintaining a population of Carniolan bees, now in their 36th generation. 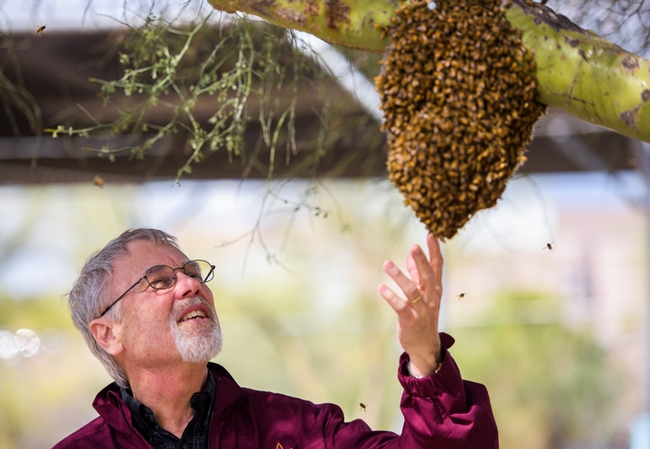