Professor Art Shapiro. (Photo by Kathy Keatley Garvey)
California's monarch population is rapidly declining. They're on life support. What actions should we take?

"The western population of the monarch butterfly has garnered widespread attention because of its dramatic decline in recent decades," the document containing the agenda read. "The latest population surveys indicate that monarchs overwintering on the central coast have declined 86% since last winter and now total 0.5% of their historical average. Population declines have spurred greater scientific study, funding, and coordination around the western monarch. California legislators appropriated $3 million in funding to the CA Wildlife Conservation Board to establish the Monarch Butterfly and Pollinator Rescue Program."

"Additionally, the Western Association of Fish and Wildlife Agencies released a Western Monarch Butterfly Conservation Plan calling for an additional 50,000 acres of monarch-friendly habitat in the California Central Valley and adjacent foothills by 2029. Join Environmental Defense Fund along with farmers, restoration practitioners, and scientists for an invitation-only workshop to share expert knowledge and identify strategic opportunities for restoring monarch butterfly habitat across the Central Valley. We will discuss important topics including opportunities for monarch habitat in the food production landscape, incentivizing monarch habitat restoration using limited resources, production and distribution of native plants, and other subjects that will put the western monarch butterfly population on the path to recovery. We will use the results of the workshop to inform conservation initiatives and effectively and efficiently allocate funds and resources for optimal conservation outcomes."

Among the five speakers in the "State of the Science" workshop section was Art Shapiro, UC Davis distinguished professor of evolution and ecology, who has been monitoring Central Valley's butterfly population since 1972 and maintains a website on his research.

We thought we'd share his PowerPoint, "What We Don't Know and What We Know That Ain't So About Monarchs" in which he declared that "monarchs are on life support in California, and we are reduced to prescribing placebos." A thriving caterpillar. (Photo by Kathy Keatley Garvey)
Artemus Ward Had It Right, You Know. What We Know That Ain't So CAN and DOES Hurt Us.

But as I Said, Monarchs Are Not Alone

And Then we Had the 'Millennial' Drought

What About the Monarch?

Well, It Ain't Due to Any Milkweed Shortage! A tiny monarch egg. (Photo by Kathy Keatley Garvey)
What About Breeding Seasonality?

Again, the Drought Changed All That!

And Then There's the Matter of Winter Breeding

What Do You Breed on in the Winter?

So Why Are They Breeding in Winter?

And Then There's the OE (Ophryocystis elektroscirrha) Matter

But They Would Say That, Wouldn't They?

What We Really Need Is Good Demographic Data!

Why Don't We Have Monarch of Life Tables?

That Table Doesn't Mean We Can't Get Life Table Data

We Can Experimentally Create Our Own 'Populations' to Track

Of Course, There Are Limitations on Generalizability from Such Studies

We Need to Identify the Precise Kinds of Data We Need, Identify the Best Strategies to Get Them and Get to Work! 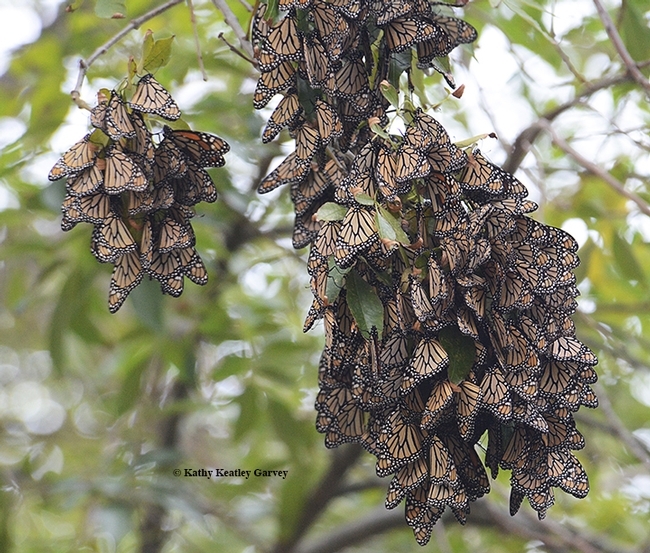 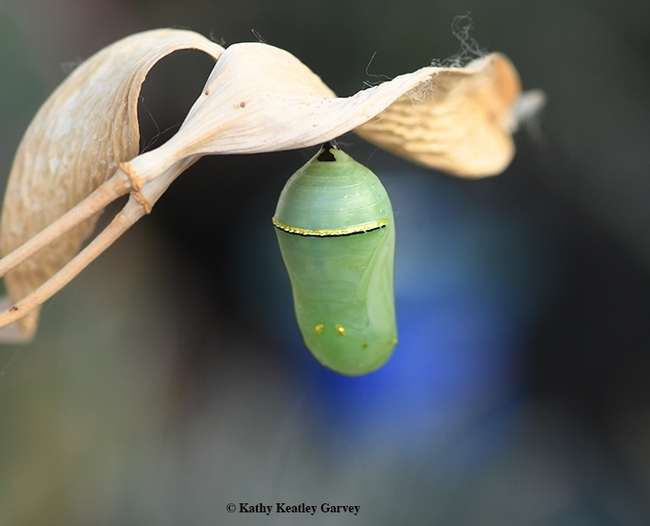 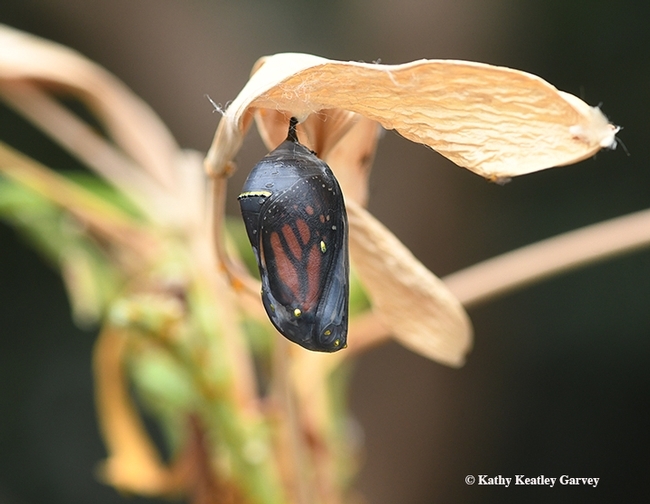 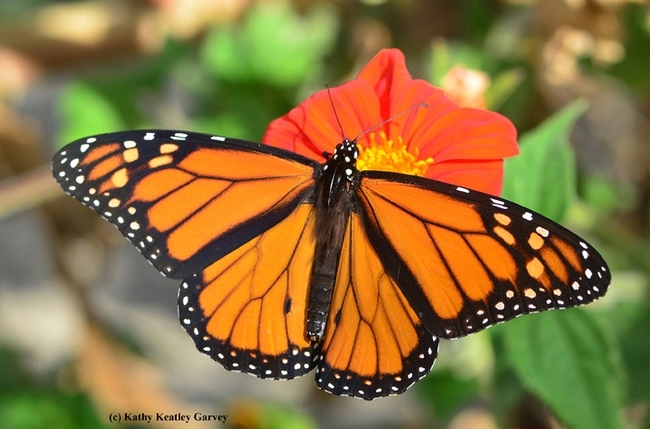 A male monarch on a Mexican sunflower (Tithonia) in Vacaville, Calif. (Photo by Kathy Keatley Garvey)
Focus Areas:
Focus Area Tags: Agriculture, Environment, Health, Innovation, Natural Resources, Yard & Garden
Tags: Art Shapiro (264), declining population (2), monarch butterflies (89), UC Davis Department of Evolution and Ecology (36)
Comments: 5
Comments:
by Mark Danenhauer
on March 5, 2019 at 10:02 AM
Thanks for sharing. This is very interesting and a bit concerning...
by Milli Wright
on March 5, 2019 at 10:21 AM
Dr Shapiro - I am so relieved to have read this account of your observations and conclusions. I am a Master Gardener in San Jose trying to figure out 'why'. We hear and see all that you are observing and evaluating. May I make a copy to add to my 'study'? Your observations are so important -- especially concerning A. curassavica.
by Yvonne Rasmussen
on March 20, 2019 at 11:29 AM
Kathy, thank you for sharing this very important information and Dr. Shapiro, thank you for your research and insights on this and other butterfly topics. This information is very helpful with key critical points I will pass along to everyone who asks about Monarch decline and possible solutions. I am the UC Master Gardener Coordinator in Napa County and this has been a topic of much discussion for us and home gardeners for several years. Thank you so very much.
by Nicholas Lethaby
on March 27, 2019 at 4:35 PM
Based on what I have been seeing in Santa Barbara, the recent drought has been pretty devastating for many butterflies so I am surprised to see it has led to increases on the transect. It would be very interesting to understand why. In my area, once common species seem to have completely disappeared, with Harford's Sulphur being a good example. I am pretty confident they will come back if we get a run of years with reasonable rainfall. I would make a couple of observations about what could have happened in 2018. At least down here, we had NO rain until mid-Jan when one storm dropped a couple of inches in a few hours. Then we had no further rain until March, when we got 7-8 inches over the month. This led to a strange season where numbers of many species were very low and with some exceptionally late emergences (e.g. California Sister flying in late Dec etc.). While the rainfall situation was likely not as bad around Sacramento, I would imagine it was similar in having a late season bias. We felt that many individuals of many species simply may never have emerged (and waited until 2019?). The other possible explanation is that given the butterfly populations were going up in the drought, perhaps the very wet winter of 2016/17 had a delayed effect on butterfly populations (such as an increase in larval parasites in 2017) that manifested itself in low numbers in 2018. Given that we just had another wet winter, it will be interesting to see if numbers are really low in 2020.
by Frank Canonica
on November 12, 2019 at 6:56 AM
Out here in the Carolinas we are seeing more monarchs and swallowtails. There is a good sized local group that raises and releases monarchs. As well just about everyone I know plants milkweed here. It is a native plant but was eradicated for years. The best thing that ever happened was the decline of the tobacco industry. Our water improved as well as native plant populations. As for my yard, I go through enough parsley plants to feed half of Italy. My swallowtails just love it. I’ve tried giving them store bought but they won’t touch it. Sorry to see the declines in the west, Thank you for your incredible work.
Leave a Reply: