Ornithologists tell us that hummingbirds can easily eat their weight in a day, feasting on carbohydrates (nectar from blossoms and sugar water from feeders) and protein (insects and spiders).

We were thinking of insects and pollinators today (this blog focuses on insects and the entomologists who study them) after reading a UC Davis research paper published in the Proceedings of the Royal Society B that tested sugar water in hummingbird feeders.

Fact is, sugar water in hummingbird feeders can contain high densities of microbial cells but “very few of the bacteria or fungi identified have been reported to be associated with avian disease,” says community ecologist and co-author Rachel Vannette of the UC Davis Department of Entomology and Nematology.

The research is one of the first to explore the microbial communities that dwell in sugar water from feeders and compare them to those found in flower nectar and samples from live hummingbirds.

“The potential for sugar water from hummingbird feeders to act as a vector for avian pathogens--or even zoonotic pathogens--is unknown,” said Vannette, an assistant professor in the UC Davis Department of Entomology and Nematology. “Our study is one of the first to address this public concern. Although we found high densities of both bacteria and fungi in sugar water samples from feeders, very few of the species of bacteria or fungi found have been reported to cause disease in hummingbirds.”

“So although birds definitely vector bacteria and fungi to feeders, based on the results from this study, the majority of microbes growing in feeders do not likely pose significant health hazards to birds or humans,” Vannette said. “However, a tiny fraction of those microbes has been associated with disease, so we encourage everyone who provides feeders for hummingbirds to clean their feeders on a regular basis and to avoid areas where human food is prepared.”

The paper, “Microbial Communities in Hummingbird Feeders Are Distinct from Floral Nectar and Influenced by Bird Visitation,” is the work of first author Casie Lee, a UC Davis School of Veterinary Medicine student; Professor Lee Tell of the UC Davis School of Veterinary Medicine's Department of Medicine and Epidemiology; Tiffany Hilfer, an undergraduate student and Global Disease Biology major; and Vannette.

Lee, mentored by Vannette and Tell, led the field experiment and performed bird observations and laboratory work during a summer project funded by the Students Training in Advanced Research (STAR) and Merial Veterinary Scholars Programs.

The researchers also compared the microbes in the feeders to those in floral nectar and found they differed in microbial composition.

But back to insects and the hummingbirds that eat them. Entomologist Doug Tallamy of the University of Delaware says that "hummingbirds like and need nectar but 80 percent of their diet is insects and spiders."

Wildbirds on Line says: "I frequently put overripe bananas of my fruit feeder to attract tiny fruit flies, which in turn attract the hummers. The hummingbirds eat every fly and return in a few hours to feast on the next batch of fruit flies that discover the overripe fruit. What an easy way to observe hummers eating insects!"

Now that's an idea! Fruit flies for the hummers! 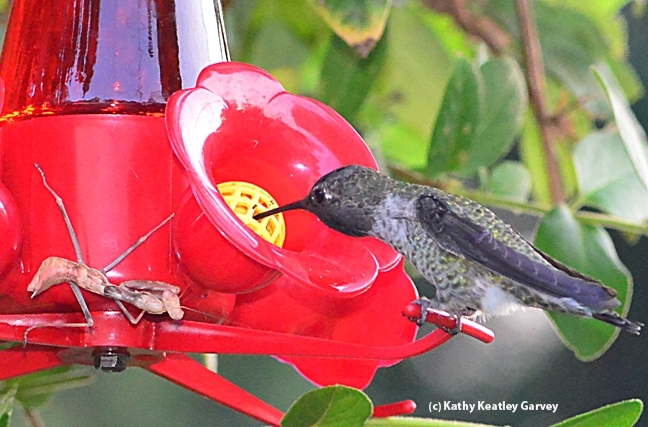 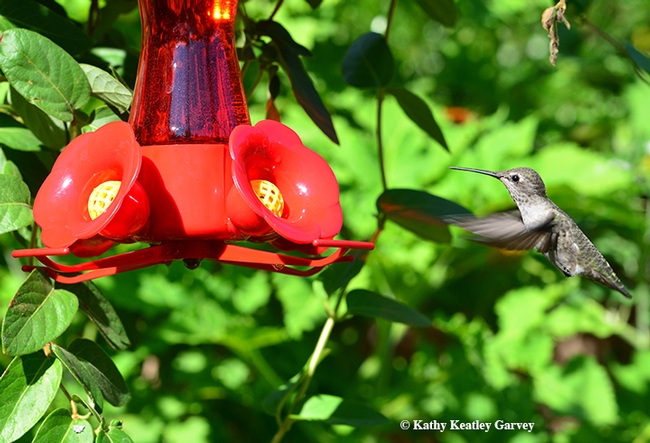 A hummingbird flies in for a quick burst of energy. (Photo by Kathy Keatley Garvey)
Focus Areas:
Focus Area Tags: Environment, Innovation, Natural Resources, Yard & Garden
Tags: hummingbirds (5), Microbial Communities in Hummingbird Feeders Are Distinct from Floral Nectar and Influenced by Bird Visitation. (1), Rachel Vannette (19), UC Davis Department of Entomology and Nematology. Proceedings of the Royal Society B (1)
Comments: 6
Comments:
by Peggy
on May 2, 2019 at 6:13 AM
Kathy, your blog is a go-to for me when I am in need of information for a Master Gardener talk. You keep us informed about what others are discovering, as well as what is going on in your own yard--and ours!
A huge thank you!
Now I have to go out and put some rotten bananas in the garden. Who knew?
Peggy
by Art
on February 10, 2020 at 7:43 AM
Last year, I had an onslaught of flies all over my feeders, keeping the hummers away.
Any way to keep houseflies away?
by Jackie Sylvia
on April 27, 2020 at 2:16 PM
Hi Kathy, I loved my hummingbirds, I've made what I call hummingbird stations, where it looks like a birdhouse but it has a platform for the hummers hopefully to nest on. It's surrounded by natural wood with moss that the hummers use to make their nests. Do you think they'll use it? I would love to send a pic but i can't on here, please email me and i will send you a pic to see what you think.
by PVR Reddy
on April 30, 2020 at 2:41 AM
Hi Kathy..I enjoy your 'Bee-utiful' blogs...and almost don't miss...i am enriched with info on bumble bees...which are exotic to us..wish to know by any chance do you come across Indian honey bee (Apis cerana) on your campus..if so, try to capture a pic..its my pet bee ( I'm working on it in India).
by Mary Lou Rushing
on August 22, 2020 at 7:35 PM
So good to hear about the study and critters that live in them.
by mike
on October 12, 2020 at 8:42 PM
Thank you for the tip about bananas. I will do that tonight because there are Annas flying around my front door apparently looking for insects. They are flying above my front door for over an hour without stopping. There is a feeder close by. This is the 2nd time I have observed this. That time the bird flew in that same area for approximately 3 hours. Is this normal behavior?
Leave a Reply: