The painted ladies are on the move.

Have you seen these migratory butterflies, Vanessa cardui, passing through California on their way to the Pacific Northwest?

But butterfly guru Art Shapiro, distinguished professor of evolution and ecology, who has monitored the butterfly population of Central California for more than four decades and maintains a research website, has seen approximately 400 painted ladies this season--about 300 today.

All I saw today was a lone cabbage white butterfly flying through our pollinator garden in Vacaville.

Guess the painted ladies didn't get the message. The New York Times, did, though.

"The orange butterflies, called painted ladies, are known to travel annually from the deserts of Southern California to the Pacific Northwest," wrote New York Times reporter Julia Jacobs in a March 17th piece. "This month, people are taking notice because of the sheer size of the migration: Scientists estimate the teeming painted ladies number in the millions."

"Substantial rainfall in the deserts near the Mexican border, where the North American painted ladies lay their eggs, is the reason for the unusually large swarms," Jacobs pointed out. "The rain caused plants to thrive, giving the painted lady caterpillars plenty of food to fuel their transformation, said Art Shapiro, a professor of evolution and ecology at the University of California, Davis."

Shapiro told the New York Times that "the striking thing is they're moving very rapidly and directionally. So it's almost like being in a hail of bullets.”

They're passing through Davis, too. Shapiro headed over to the UC Davis Memorial Union patio today and noticed that "the painted ladies are on the upswing. Many are nectaring, suggesting they're running out of fat, but despite the abundance of potential hosts, saw no oviposiiton. Condition extremely variable, from beat-to-hell to looking almost fresh."

The professor witnessed them passing by the Memorial Union "roughly one every 90 seconds." Ironically, no one seemed to notice them, Shapiro said. Well, it is finals week!

The Los Angeles Times reported March 11 that a "massive swarm of at least 1 billion butterflies is traveling across Los Angeles and neighboring counties at a breathtaking speed of almost 20 miles an hour." They're in a "rush to reach their breeding areas in Oregon."

Shapiro says that years of tremendous wildflower blooms are typically big years for the butterflies. The last big year was 2005. He explains the phenonomen on his website:

"This mass-migrant occurs in much of the Northern Hemisphere. Apparently the entire North American population winters near the US-Mexico border, breeding in the desert after the winter rains generate a crop of annual Malvaceous, Boraginaceous and Asteraceous hosts. The resulting butterflies migrate north. In good years (lots of desert rain) they may do so by billions, interfering with traffic and attracting the attention of the media. 2005 was one of the biggest Painted Lady years in history--perhaps the biggest, but how can we know? At Sacramento at the height of the migration butterflies were passing in one's field of vision at the rate of about 3 per second! 2006, by contrast, was a La Nina year with very little rain in the desert. The butterflies apparently gave up trying to breed there and flew north in February. They tried to breed but mostly were unsuccessful due to bad weather, resulting in only very sporadic individual sightings of their progeny in May.

"Northward-migrating Painted Ladies are provisioned with yellow fat and are reproductively immature," he writes. "They do not stop to feed or have sex until they have burned up their reserves, carried over from the caterpillar stage. They fly in a straight line from SE to NW, like 'bats out of Hell,' and go over obstacles rather than trying to go around them. (On certain days there may be concerted local movements in the wrong direction. We do not understand these.) Painted Ladies tend to fly parallel to the Sierra Nevada, not across it. They enter the Central Valley through the Inyo-Kern lowland or by crossing the Transverse Ranges. They can apparently make it from Bishop to Davis in three days. In some years the migration is heavier in the Great Basin and on the East slope of the Sierra than farther west.

"The Painted Lady moves northward in a generational wave as the season progresses. Frequently it disappears altogether from the lowlands in summer. Beginning in August the movement reverses and butterflies head south toward the desert wintering grounds. The southward migration is a more protracted affair, with plenty of adult feeding and some breeding en route. Numbers tend to be highest east of the crest, on Rabbitbrush blossoms in October."

Shapiro just received word of "a major movement through the Kern River Valley. Inyo-Kern is the superhighway from the desert to the Central Valley, so the biggest numbers may yet be on the way." 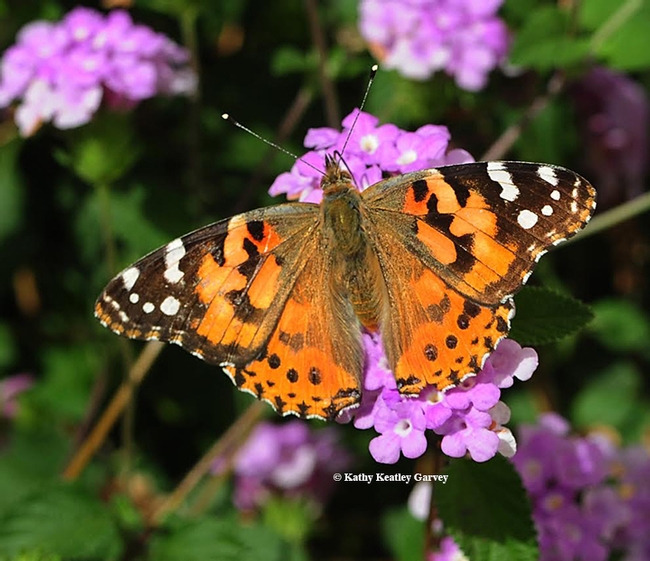 A painted lady, Vanessa cardui, photographed on lantana in Vacaville in 2015. (Photo by Kathy Keatley Garvey)
Focus Areas:
Focus Area Tags: Environment, Natural Resources
Tags: Art Shapiro (233), butterfly guru (1), Los Angeles Times (2), migrating butterflies (1), New York Times (6), painted ladies (5), UC Davis Department of Evolution and Ecology (36), Vanessa cardui (6)
Comments: 5
Comments:
by Win L Rogers
on March 20, 2019 at 8:40 AM
I have seen only scattered ones in Stockton. Some do spend time in our garden, nectaring at Arctostaphylos and mustard.
by Ellen Zagory
on March 20, 2019 at 10:15 AM
We saw a number of them yesterday on campus and in the Arboretum. Also in my yard near campus yesterday afternoon.
by Yvonne Rasmussen
on March 20, 2019 at 10:54 AM
Yes I did see many of the painted ladies flying in afternoon of Monday March 18, 2019. They appeared to be going Eastward, maybe North East, away from the marshes across Hwy 29 between Napa and Vallejo.
by Kathy Klobas
on March 20, 2019 at 12:18 PM
My friend in Benicia counted approximately 250 painted ladies flying over her home in 15 minutes. This was on Tuesday, March 18!
by Judy Ryan
on March 20, 2019 at 9:35 PM
I saw half a dozen in my yard this afternoon. They seemed to like the rosemary bushes. Very exciting. Hope to see more tomorrow.
Leave a Reply: