This bolas spider, Cladomelea debeeri, was discovered in Pietermaritzburg (South Africa) in 2000 at a house on Millikan Road in the suburb of Prestbury by John Roff. (Courtesy of Wikipedia)
UC Davis chemical ecologist Walter Leal characterizes the work in his lab as "like bolas spiders."

What are bolas spiders? Well, they're also known as angling or fishing spiders. That's because they don't spin a web, they hunt with a sticky glob of silk on the end of a line known as "bolas."

When they swing the bolas or lines at flying moths, they snag their prey, much like an angler snags a fish on a hook. Fish on? Bug on!

And are you ready for a "Buggy Scene?"

Walter Leal, a distinguished professor with the Department of Molecular and Cellular Biology and a past chair of the UC Davis Department of Entomology, is featured on the College of Biological Sciences website in a piece titled "Discovering Curiosity: the Buggy Scene of Desire with Distinguished Professor Walter Leal."

"The American bolas spider is no one-trick pony when it comes to its enticing chemical mimicry," Watry wrote. "As midnight approaches, bristly cutworms retreat and smoky tetanolita moths (Tetanolita mynesalis) appear, the two moth species active during different times of the night. The American bolas spider can chemically compensate for the moths' different schedules, shifting the makeup of its deadly bouquet to match the pheromones produced by a female smoky tetanolita."

Leal, a native of Brazil, holds a master's degree and doctorate from Japan, where he studied insect chemical communication and olfaction, and held the position of senior research scientist in Japan's Ministry of Agriculture, the first non-Japanese scientist to do so. He joined the UC Davis faculty in 2000 and was named chair of the  Department of Entomology (now the Department of Entomology and Nematology) in 2006.

Leal is internationally known for his chemical ecology research--he and his lab have identified sex pheromones of many insects, including moths, beetles, cockroaches and mites. His work is especially important in the field of agriculture, as he targets pests that eat our crops. His pheromones attract pests just as bolas spiders attract moths.

"Leal studies the molecular basis of insect olfaction, unraveling how insects detect chemicals and using that knowledge to inform pest management techniques," Watry wrote. "Most recently, he and colleagues identified a sex pheromone of the Asian citrus psyllid (Diaphorina ciri), a worldwide threat to the citrus industry that made its way to California in 2008. Identifying the pheromone could help mitigate the agricultural devastation caused by the insects."

On a side note, Leal is known for his leadership: he co-chaired the 2016 International Congress of Entomology, the largest scientific event in the history of entomology and he will deliver the Founders' Memorial Lecture at the 2019 Entomological Society of America meeting in St. Louis, Mo., on pioneer chemical ecologist Thomas Eisner, 1929-2011. Eiser is commonly regarded as the "father of chemical ecology" for his discoveries elucidating chemical defenses used by insects.

Leal is also known as an exemplary, innovative and caring teacher who seeks opportunities for their success. He was the one who brought Science without Borders (SwB) to the UC Davis campus, which resulted in many students and visitors to UC Davis laboratories.

"Really nice professor who cares about his students' future," wrote a student on Rate My Professors. "He has guest speakers from industry talk to the class and Dr. Leal always makes sure to ask them about internships and ways to get our foot in the door."

Leal recently returned from his native Brazil where UC Davis Global Affairs asked him if he would meet with the leadership of São Paulo State University to explore possible collaborations. He did, and plans are in the works. Stay tuned! 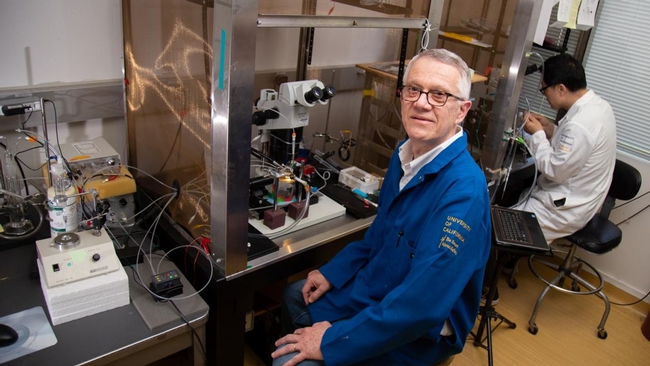