Bug Squad
sitenum=63
Happenings in the insect world
Birds, Bats or a Bloom? But No Splat! Wait! They may NOT have been ladybugs, scientifically known as lady beetles, family Coccinellidae.

“I'm still not convinced that the swarms are ladybugs,” Lynn Kimsey, director of the Bohart Museum of Entomology and professor of entomology at UC Davis, told us Friday. “It's pretty late in the season for them and apparently there's no hard evidence for ladybugs except anecdotes that folks have seen a lot of ladybugs in the region. We were seeing a lot of ladybugs in the Imperial Dunes when we were there in March.”

Scientists spotted the cloud, about 10 miles wide and a mile above the ground around 9 p.m.   They ruled out bats and birds. The temperature in the air? About 40 degrees or lower—considered too cold for ladybugs.

“Forty degrees is too cold for their flight muscles, but if there's a wind and they've already warmed up, it's possible they could stay airborne,” Kimsey said, adding she'd like to see some hard evidence that these were indeed ladybugs. “Otherwise this is all just speculation.”

The ladybugs were thought to be the migratory convergent lady beetles, Hippodamia convergens. Some 200 species of ladybugs reside in California. (See information on this beetle on the UC Statewide Integrated Pest Management Program website.) Kimsey says ladybugs typically migrate from the mountains toward the coast in early spring, and vice versa in the fall. “This is a bit later than usual but it's probably because of the weird cold, wet spring we've been having.”

Speculation abounds. Why the huge swarm? Maybe it was the result of a combination of cues, such as temperatures and length of day, climate change (wildfires?), and lack of food?  A perfect storm?

Kimsey told reporter Maanvi Singh of The Guardian in a June 7th news story: “It's too bad there wasn't anyone in a private plane up in the air at that time. We could've figured it out based on which dead insects were splatted across the wings.””

Kimsey knows about those bug splats. She was the nation's only entomologist selected for the NASA SPLAT/Boeing team to research how to decrease bug splats on aircraft and thus increase fuel efficiency in commercial jets. NASA engineers developed four different surface treatments designed to repel bugs and Boeing developed wing modifications to test an aircraft at Shreveport, La.

By the way, a Boeing EcoDemonstrator 575 took flight, reaching an altitude of 5000 feet to maximize bug splats. The panels generated 100 and 500 splats each. Kimsey identified all the insects and found that a relatively small number of species caused the bulk of the splats. They included flower flies, aphids, thrips, muscid flies, midges, mosquitoes and love bugs. Kimsey's excellence in teaching, research and public service led to her being named the 2016 recipient of the Academic Senate's Distinguished Scholarly Public Service Award and a comment from her nominators that her SPLAT research was a "great public service to NASA, the airline industry and worldwide passengers who depend on air travel."

Naturalist Greg Kareofelas, an associate at the Bohart Museum of Entomology, has never seen such a cloud but has photographed lady beetles overwintering in California's Coast Range. "When they are at the place they will spend the winter, they hide under leaves and other detritus and unless you dig down to the ground level, you don't really see them or notice they are there. I guess this is the way they are protected from the cold. I know the places I have found them are under snow for the winter. It is only when they are ready to disperse in the spring, do they congregate like on tree trunks and other places above ground level."

UC Davis emeritus professor Hugh Dingle, author of Migration: The Biology of Life on the Move (second edition, 2014, Oxford University Press), a sequel to the first edition published in 1996, says the cloud may have been lady beetles. "I guess lady beetles, but I suspect other insects were in the swarm as well."

"This one was especially large, but yes, there have been other swarms showing up on radars, especially locusts, some moths," Dingle said. "Could also have been moths, grasshoppers, etc. I confess, though, that the swarm was so large that I wonder if there was a glitch somewhere on the radar or something?"

Now if there had just been a plane near that cloud, as Kimsey pointed out, we'd have known exactly what was in that swarm. 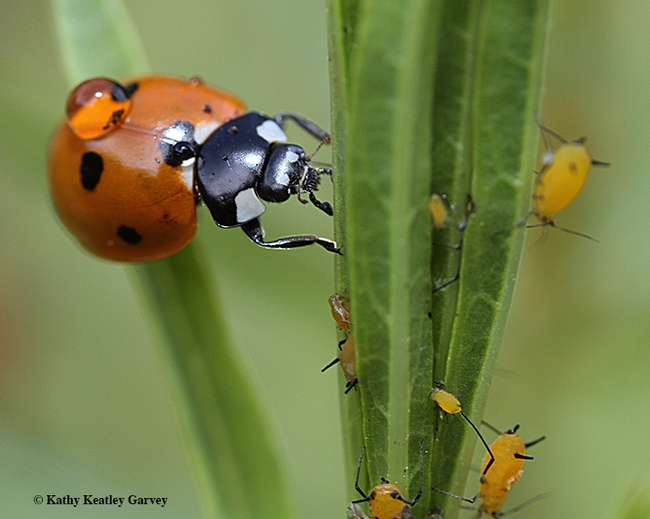 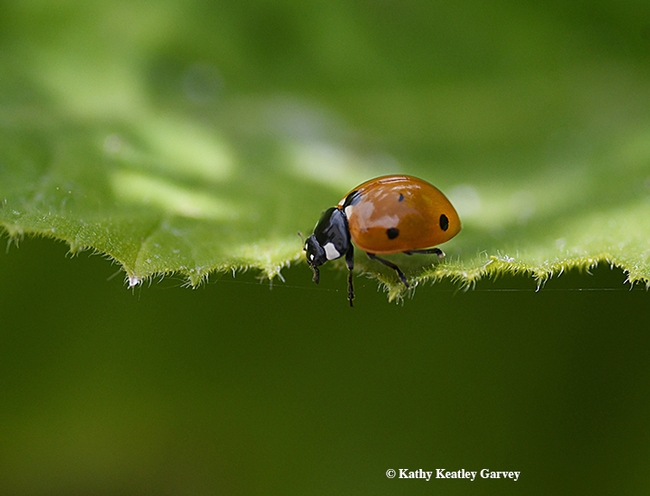 A lady beetle on the prowl in Vacaville, Calif. (Photo by Kathy Keatley Garvey) 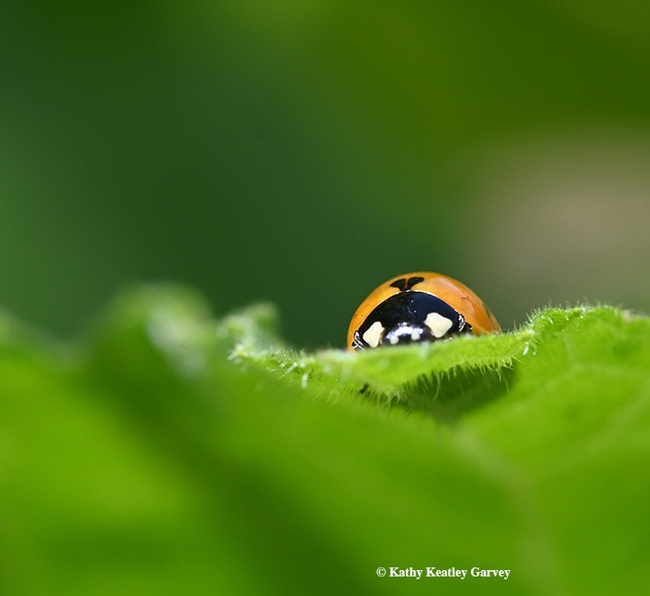 Peek-a-boo! A lady beetle peers over a leaf in Vacaville, Calif. (Photo by Kathy Keatley Garvey) 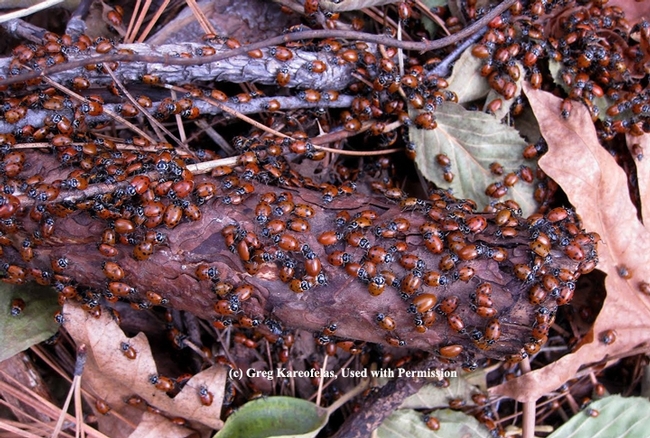