Bug Squad
sitenum=63
Happenings in the insect world
Got Milk? Got a Question About Tsetse Flies? A tsetse fly, the work of medical entomologist Geoffrey Attardo. He will deliver a presentation on tsetse flies at 5:30 p.m., Wednesday, June 12 in the G Street Wunderbar, 228 G St..
Got milk? Got a question about tsetse flies?

Yes? Then you'll want to attend the Science Café presentation on Wednesday, June 7, when medical entomologist and tsetse expert Geoffrey Attardo of the UC Davis Department of Entomology and Nematology will discuss “Got Milk? The Evolution and Biology of the Lactation in the Tsetse Fly.”

The event, set  for 5:30 p.m., in the G Street Wunderbar, 228 G St., Davis, Calif., is free and open to the public.  Jared Shaw of the UC Davis College of Letters and Science will host the presentation.

“It is actually going to be a very basic talk aimed at lay audiences and kids,” Attardo says. “I'll be talking about my background, how I became an entomologist and how I ended up working on tsetse flies. Then I am going to discuss the life history of tsetse flies, where they can be found, why they are of medical importance and how their reproductive biology differs so dramatically from other flies that people are familiar with. My plan is to go over their reproductive cycle, how they develop intrauterine larvae, the reproductive adaptations that allow them to perform this feat and then go over what we know about tsetse milk secretions and how they compare to mammalian milk in terms of nutritional content.”

“The aim is for it to be very informal, with very little scientific jargon and to be discussion-oriented so that there is lots of questions and answers. I am also bringing some items from the lab that can be passed around the audience for show and tell (homemade tsetse cages, the blood feeding system we use to feed the flies and some tsetse flies preserved in alcohol).

Attardo focuses his research on numerous aspects of the physiology of tsetse fly reproduction, with the goal to identify and understand key aspects of its reproductive biology. He joined the UC Davis Department of Entomology and Nematology in 2017 from the Yale University School of Public Health, New Haven, Conn., where he researched tsetse flies in the lab of Serap Aksoy.

Attardo considers the tsetse fly "one of the champions of the insect world."

"In addition to being vectors of a deadly disease, Trypanosomiasis, these flies have undergone amazing alterations to their physiology relative to other insects," he says. "Some examples of this are their ability feed exclusively on blood, their obligate relationship with a bacterial symbiont, the fact that they lactate and that they give birth to fully developed larval offspring."

If you'd like scientific information on tsetse fly lactation, see Adenotrophic Viviparity in Tsetse Flies: Potential for Population Control and as an Insect Model for Lactation, co-authored by Attardo and published in January 2015 in the Annual Review of Entomology.

The UC Davis scientist was featured in a New York Times' article on tsetse flies on Feb. 12. Pulitzer-Prize winning science writer Natalie Angier penned the article, "Everywhere in the Animal Kingdom, Followers of the Milky Way" (subhead: "As scientists learn more about milk's evolution and compositional variations, they are redefining what used to be a signature characteristic of mammals.")

"Most female flies take a low-rent approach to parenthood, depositing scores of seed-sized eggs in the trash or on pet scat to hatch, leaving the larvae to fend for themselves," Angier wrote.  "Not so the female tsetse fly. She gestates her young internally, one at a time, and gives birth to them live. When each extravagantly pampered offspring pulls free of her uterus after nine days, fly mother and child are pretty much the same size."

Then she quoted Attardo: “It's the equivalent of giving birth to an 18-year-old."

Attardo is also a talented macro photographer. He won the 2010 Fogarty Grantee Photo Contest with an image of a tsetse fly. The Yale School of Public Health magazine featured his images on “An Eye for the Tsetse Fly.” The Los Angeles Times published his remarkable video (in 2014) of a tsetse fly giving birth.  Also, see his portraits of the tsetse fly on Live Science, published in 2014. 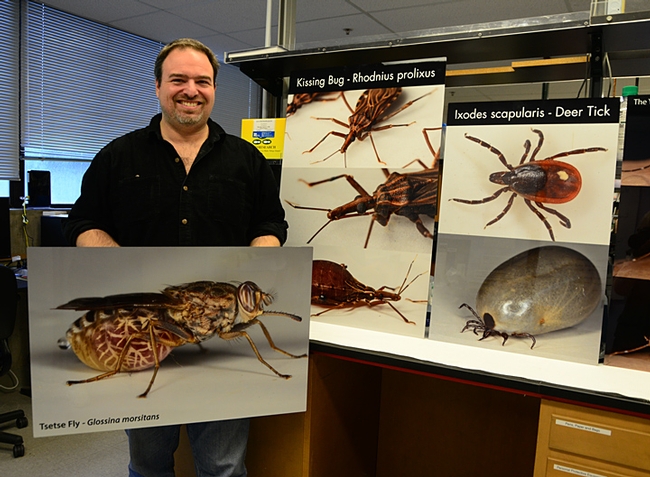 Medical entomologist Geoffrey Attardo with some of his images he displayed at the UC Davis Picnic Day. (Photo by Kathy Keatley Garvey)
Focus Areas:
Focus Area Tags: Economic Development, Family, Health, Innovation, Pest Management
Tags: Geoffrey Attardo (21), lactation (1), milk (1), Science Café (2), tsetse flies (7), UC Davis Department of Entomology and Nematology (544)
Comments: 2
Comments:
by nicek
on June 22, 2020 at 10:00 PM
Nice info. Thanks for your valuable blog
by Mitch Waters
on August 5, 2021 at 1:26 PM
I have a question about a yellow biting fly I’ve encountered on many occasions in the Charleston, SC area. It’s yellow, with brown bands around their thorax, feed on blood, and have a fierce bite that leave significant red marks lasting for about ten days. I’ve only found the fly in marshland areas, mostly unpopulated National Forest land.
I have several clear photos and a few dead samples encased in clear tape.
Can you please help me identify this species of fly?
Leave a Reply: