Have you ever seen a cluster of longhorned male bees sleeping overnight on a Mexican sunflower (Tithonia)?

Every day around sunset, the longhorned bees, probably Melissodes agilis  (tribe Eucerini), call it a day and head for their favorite flower (bedroom), which happens to be Tithonia in our pollinator garden in Vacaville. If you grow flowers for the native bees, and you wake up early in the morning before they do, you may see them, too.

"Most frequently, the boy bee overnight clusters are single-species clusters," said Thorp, co-author of California Bees and Blooms, a Guide for Gardeners and Naturalists, with UC-affiliated authors Gordon Frankie, Rollin E. Coville, and Barbara Ertter. He previously identified some of ours as Melissodes agilis.

In a previous Bug Squad blog, Thorp responded to a reader's inquiry about "stings" from the clustering bees. "Boy bees cannot sting," he pointed out. "They lack a stinger which is a modified ovipositor in their wasp ancestors.  Occasionally a girl bee may spend the night out if she is caught by sudden drop in temperature.  Usually she will not be part of a group sleep over.  So don't attempt to handle unless you are confident you can tell boy bees from girl bees or they are too sleepy to defend themselves."

"Boy sleeping aggregations are based on a suitable perch and not related to where females are nesting, but probably no more than 100 yards from the nearest female nest," Thorp answered.  "Females nest in the ground and have rather distinctive round holes about the diameter of a pencil or slightly smaller, sometimes with small piles of dirt around them looking like mini-volcanos.  The holes may be widely separated or clustered together depending on the species, but each female digs her own burrow."

Said Thorp: "The boys usually settle in as the light dims in the evening.  Cool, and drizzly conditions may modify bed time. Each establishes his own spot, so there may be some jostling for position initially."

Longhorned bees are among the more than 1600 species of undomesticated bees that reside in California. The co-authors of California Bees and Blooms focus on 22 of the most common genera and the flowers they frequent. 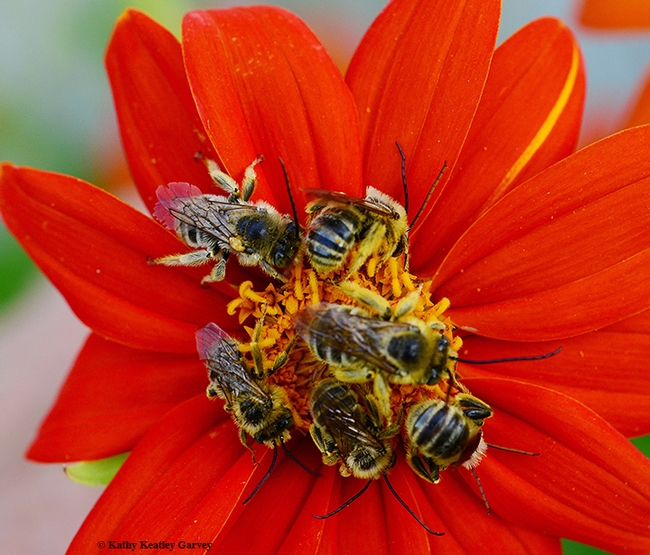 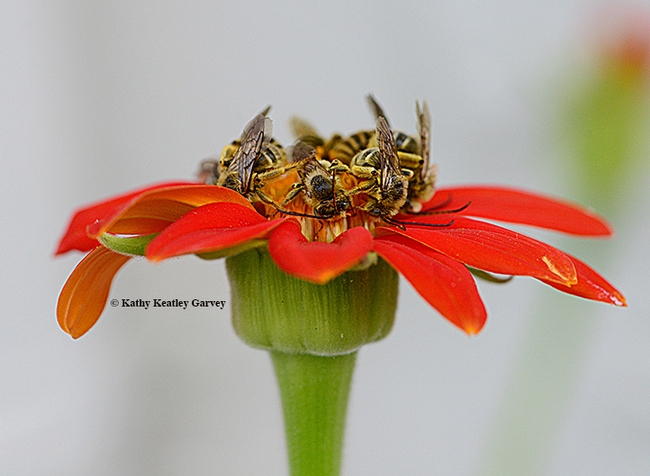