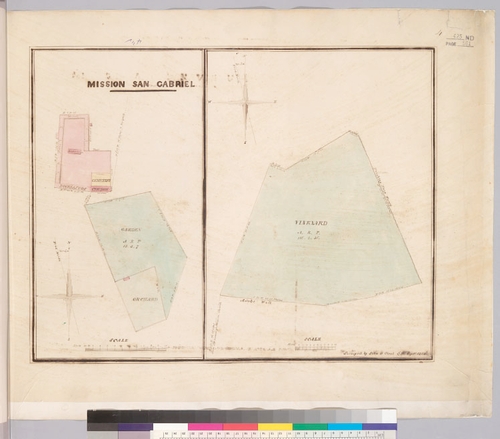 Survey of the San Gabriel Mission, showing vineyard
The San Gabriel Mission was one of the first centers of wine grape production in early Los Angeles. This 1854 survey shows the Mission's extensive vineyard, on the right panel. Image from the Bancroft Library, University of California, Berkeley.
Tags: Jean Louis Vignes (1), Vineyards (2), Wine (2)
Comments: 1
Comments:
by Frank Tremmel
on November 16, 2010 at 10:03 AM
Judi,

Fascinating information. I carry over 10 varieties of grapes in our store, but I had not considered the history of viticulture and its importance to the Los Angeles area.

I am glad to see a resurgence of vegetable gardening and fruit tree production in our back yards.