With the gubernatorial elections in California just weeks away, I have been thinking more about what I'd like to hear from the candidates.  Hunger is a big problem here in Los Angeles County.   I'd like to see our state doing more to address hunger and access to healthy food.  For example, why does California have such low rates of food stamp participation? I haven't yet heard the candidates discuss hunger or food access.

In doing some research on Depression-era agriculture in Los Angeles, I was excited to learn about another contender for the job of California governor, 1934 candidate Upton Sinclair.  He would probably have a lot to say to 2010 candidates Jerry Brown and Meg Whitman on fighting poverty and hunger.

A well-known novelist, Sinclair made his home in the Los Angeles area beginning in 1916.  His novel, “The Jungle”, published in 1906, exposed the unsafe and unsanitary conditions of the meatpacking industry, sparking a national outcry which led to the passage of the Pure Food and Drug Act. Sinclair was an opinionated and prolific author of books and tracts on numerous topics.  He was also a dedicated Socialist, who nonetheless decided to run for governor of California as a democrat.  In other times, he and his campaign might not have gotten much traction, but the Depression and its devastating effects earned him a wide audience. His plan for a transformed California, EPIC (for “End Poverty in California") was inspiring to the unemployed and became a phenomenon in 1933 and 1934.   The EPIC campaign was headquartered in Los Angeles, and encouraged supporters to form EPIC clubs at the local level.  Soon, almost 1,000 such clubs had formed throughout the state (Starr, 1996).

A cornerstone of EPIC was a plan to use idle land to create farming colonies, where the unemployed would be put to work growing food to feed the hungry.  Sinclair envisioned communal colonies, where excess farm products would be bartered for other goods.  Idle factories would also be put to use employing those out of work.  Cash would be less important in Sinclair’s vision, as barter and exchange of goods would become the focus of the economy.  Sinclair also proposed that small farmers would pay their taxes in the form of agricultural products, rather than cash.

To Sinclair, it made sense that unused land would be put to use for the greater good.  He wrote about the use of vacant land, “In Germany, every square foot of such land was planted with vegetables and small fruits.  Why could not we in California have garden plots where there were now burned out patches of weeds?" (Sinclair, 1994, p. 17).  In Sinclair’s vision, no one would go hungry. His EPIC Plan would primarily be financed by taxing corporations and utilities.

Sinclair and EPIC were surprisingly successful.  He won the democratic primary and registered thousands of voters.  However, Southern California businesses mobilized against him, as they found his vision of agricultural and economic reform threatening.  The publisher of the Los Angeles Times, Harry Chandler, and the President of Los Angeles-based Sunkist, Charles Collins Teague (also President of the California State Chamber of Commerce) were just two major players in a campaign to discredit Sinclair.  Through newspaper articles, advertisements, and newsreels, Sinclair was painted as a communist and his plans as dangerous (Sackman, 2005).

One typically over-the-top anti-Sinclair advertisement said of EPIC that “if it is successful, it will destroy California’s business structure, bankrupt our families, overthrow our organized labor, confiscate our homes, wreck our industries, and rob our employed workers of their employment".

Sinclair was also blamed by his powerful detractors for a trend that was beginning to rise to the top of the political agenda in California: Dustbowl migrants entering the state looking for work.  According to his critics, Sinclair’s EPIC plan, with its assurances of food and employment for all, was responsible for the influx of thousands of impoverished families from Oklahoma and other states.  (The reasons for that migration are complex, and had little to do with Sinclair or EPIC, and much to do with New Deal agricultural policies, desperation, and the perceived availability of jobs in California).  Ultimately, while Sinclair lost to conservative republican Frank F. Merriam, he still received 879,537 votes, or 38% of the vote, and more than 20 candidates running on an EPIC platform made it to the State Assembly (Starr, 1996).

While the specifics of Sinclair's plan might not be practical today, what struck me most about his EPIC Plan was the idea that food and access to it should be a major focus of state government. We all need to eat.  And today, as in Sinclair's era, California is a state of amazing agricultural abundance.  Why should anyone go hungry here? Can't we and shouldn't we do more?

Jerry and Meg, let's hear what you have to say about hunger and food access. 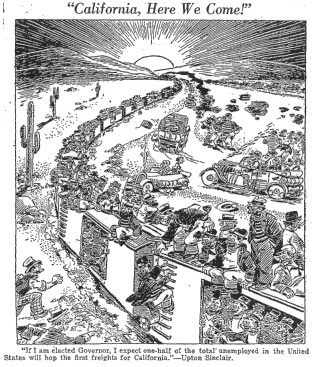 "California, Here We Come!"
This cartoon was typical of a coordinated campaign to discredit Upton Sinclair and EPIC and promoted the notion that he was responsible for the influx of unemployed Dustbowl migrants into California. Accessed at http://www.nationalhomeless.org/civilrights/Sinclair/index.html
Tags: agriculture (7), farm (8), Upton Sinclair (1)
Comments: 0
No Comments Posted.
Leave a Reply: