Published on: August 30, 2010
The peak bee season is winding down--along with the number of bee swarms.

"There aren't that many bees swarming this time of the year," said Extension apiculturist Eric Mussen, member of the UC Davis Department of Entomology faculty. When bees swarm, they have to consider available food, he said, and the food supply is diminishing as we head into fall.

Often a homeowner will contact the bee biology folks here in the UC Davis Department of Entomology with this request: "I've got a bee swarm on my property. I don't want to kill them and I can't afford to pay for their removal. Do you know of anyone who can remove them for free?"

We usually provide the names of several beekeepers in the area who we know will oblige.

But ala Ghostbusters, "Who ya gonna call?"

Mussen, who writes the from the UC Apiaries newsletter and Bee Briefs, has an excellent piece on bee swarms on his website. It includes a definition of a swarm, what bees do, how swarms are removed and where to find beekeepers to remove them. He also points out that Africanized honey bees are more aggressive.

"Swarming is the honey bee’s method of colony reproduction," he writes in the "Removing Swarms" Bee Brief. "The old queen and half of the worker bees leave their former nest and seek a new home mostly in the spring, but sometimes in late summer. A few worker honey bees, we call 'scouts,' fly around areas in the vicinity of the old hive searching for a suitable, new habitat (the correct sized cavity with an easily protected entrance). Often, that job is not completed when the swarm “issues” from the hive. The outpouring of bees from the hive forms a large, buzzing cloud of insects that seems to be going every direction at once. That flying group of honey bees is the swarm. It is a phenomenal sight that frequently scares people. However, the bees eventually have to regroup, somewhere, while the search for a new home continues."

How do you find someone to remove them?  Ala Ghostbusters, "who ya gonna call?" 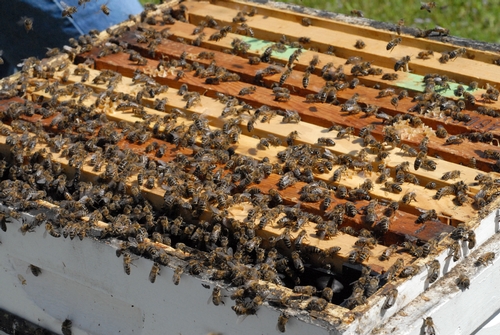 Ready to Swarm
THESE BEES at the Harry H. Laidlaw Jr. Honey Bee Research Facility, UC Davis, are ready to swarm. A few minutes later, they took off. (Photo by Kathy Keatley Garvey) 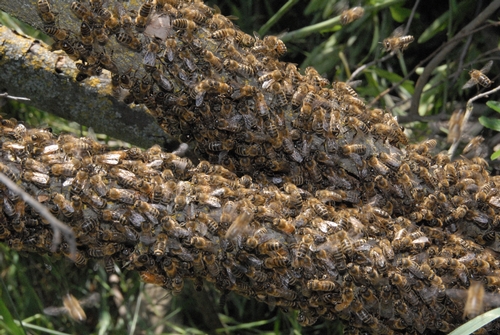 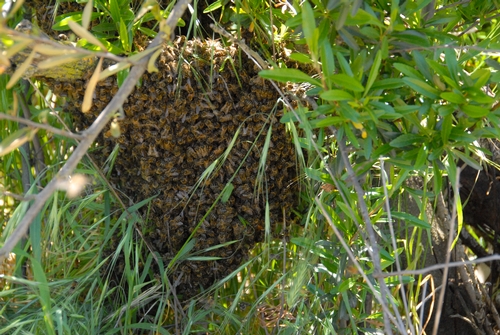 On the Trunk
THE TRUNK of a tree is covered with bees that have just swarmed. (Photo by Kathy Keatley Garvey)
Tags: bee swarm (5), Eric Mussen (250)
Comments: 0
No Comments Posted.
Leave a Reply: