After 10 years of experimentation, researchers at the University of California’s Westside Research and Extension Center in Five Points, Calif. have worked out a number of the “kinks” in conservation tillage (CT) practices for cotton and tomato rotations.

The team, composed of Will Horwath, Karen Klonsky, Wes Wallender and Randy Southard out of UCD, Dan Munk and Kurt Hembree out of local Fresno County Cooperative Extension office, and Anil Shrestha from Fresno State, has made steady progress over the years and their research is now shedding light on a number of promising practices for these two stalwart San Joaquin Valley (SJV) crops.

The first few years of the team’s work in CT farming systems weren’t too encouraging.  The standard tillage methods initially were better in terms of yield.  Mitchell and colleagues, however, didn’t become discouraged as they knew that conservation tillage has been used in other parts of the country – mainly in the Midwest and Southeast – with success and yields comparable to those achieved using conventional, intensive tillage.  However, these areas of the U.S. traditionally experienced much soil erosion due to a lack of protective soil cover during their rainy, establishment period for their crops. The cropland in the San Joaquin Valley is much different from that of the Midwest and Southeastern U.S.  It has generally been leveled for surface irrigation and concerns about soil erosion have not been a major driver for conservation tillage practices in the SJV.  In recent years, however, increased fuel prices, labor needs and dust regulations have provided the incentives for renewed interest in conservation tillage.

A variety of “minimum tillage” approaches that put together various tillage operations – such as ripping, disking and ring-rolling – are now being widely used throughout the central SJV, according to Mitchell. These approaches, however, simply rely on combining tillage passes and do not necessarily reduce the overall volume of soil that is disturbed. There have been no cropping systems developed and used in the SJV to evaluate the capability of the more classic forms of CT management, such as no-tillage and strip-tillage to further reduce production costs or to increase soil carbon sequestration over time, as has been reported in other regions where these more severe forms of CT are used.

Additionally, because successful CT systems such as no-till and strip-till have been widely used in other parts of the country for a number of the crops commonly produced in the SJV, the research team reasoned that the principles of conservation tillage should work here as well. Most CT is currently employed in production regions with higher rainfall or with growing-season precipitation. The semi-arid SJV annually receives only about 7 inches of rainfall and thus agriculture relies largely on surface or gravity irrigation. Surface irrigation would likely be more difficult across or through residues that tend to accumulate in CT fields and this has been one of the things studied by the team.

The long-term tillage systems work of this team began in 1999 to evaluate CT tomato and cotton systems with and without winter cover crops. It has evaluated impacts of these practices on yield, production costs and soil carbon. The first four years of cover crops didn’t see any increase in total soil carbon, but rather, a shift in the distribution of the carbon throughout the profile was detected. The amount of carbon in the topsoil (0-6”) increased and the carbon in the subsoil (6”-12”) decreased. However, after eight years of following these four systems, the conservation tillage with cover crop (CTCC) had significantly more organic matter and the standard tillage without a cover crop (STNO) – the type that is most used in the San Joaquin Valley – had the lowest amount.

For the first year, the cover crops were irrigated up, but after that, they relied on winter rainfall for moisture and, as could be predicted, the amount of cover crop biomass produced and surface residue generated covered a greater percent of the area with greater rainfall. The conservation tillage plots had 10 times the ground covered than the standard tillage plots.

Yields for tomatoes after the first two establishment years of the CT systems were almost 10 percent higher than the standard tillage system and the cover crop systems were almost 6 percent than the non-cover crop systems. The tomato yields were comparable to the typical yields (9-year average = 36.8 tons/ac) in Fresno County. Cotton production, however, presented a different story. In the last four years of the continuing conservation tillage and cover crop study, the cotton yields were not significantly different between the standard tillage method and the conservation tillage method, but earlier in the study, difficulties with cotton stand establishment resulted in generally lower cotton yields in the CT systems.

There are many benefits that may be gained from both conservation tillage and cover cropping and a growing number of Valley farmers are now beginning to develop successful systems using these practices at a commercial scale.  More information on this research and these systems is available at the Conservation Tillage and Cropping Systems Workgroup’s website at http://ucanr.org/ct. 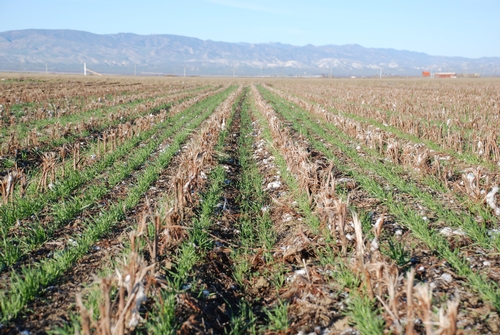