Giacomazzi was in good company. The 12 businesses and individuals honored included Governor Arnold Schwarzenegger, Fresno mayor Ashley Swearengin and a 14-year-old boy who recorded a song about global warming that reached children on five continents.

According to the release, Giacomazzi is the fourth generation to manage Giacomazzi Dairy, a family farm of 900 cows and 600 acres, which has operated at the same location in Hanford, Calif., since 1893.

Giacomazzi approaches his farm as a holistic system, and is continually looking for cultural practices that are sustainable both environmentally and economically. Working with USDA-NRCS and the University of California, Giacomazzi initiated the first demonstration evaluation of a strip-tillage corn planting system in the Central San Joaquin Valley, and has been experimenting since with different implements, plant varieties and planting configurations to optimize that system.

Strip-tillage is a farming practice that involves tilling in narrow strips rather than disturbing soil in the entire field. This process radically reduces diesel, dust, and particulate emissions as well as fuel and labor costs. For his corn-wheat rotation, Giacomazzi has reduced the annual number of tillage passes for each of his fields from 14 to 2. Giacomazzi has hosted several demonstrations and field days which have led to strip-till adoption in more than 25,000 acres in California, and has participated in numerous studies that will provide a better understanding of the relationship between dairy operations and air and water quality.

The EPA awards were presented on the agency’s 40th anniversary to help celebrate "40 Years of Environmentalism," the news release said. 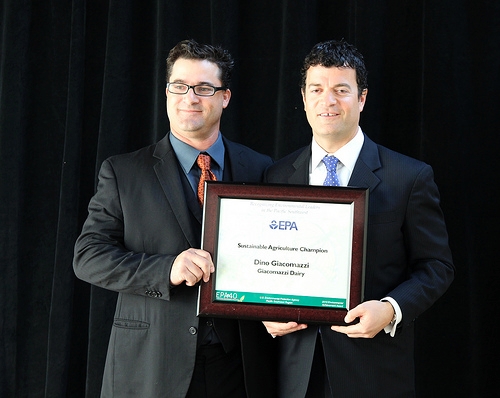