Jackson Audley
Doctoral candidate and forest entomologist Jackson Audley of the UC Davis Department of Entomology and Nematology, targets an invasive bark beetle that's about the size of a grain of rice.

In association with the fungus, Geosmithia morbida,it causes the insect-pathogen complex known as "thousand cankers disease," which wreaks havoc on walnut trees.

Audley will share his research at his exit seminar, "Semiochemical Interruption of Host Selection Behavior of the Invasive Walnut Twig Beetle, Pityophthorus juglandis," set for 4:10 p.m., Wednesday, Dec. 4 in 122 Briggs Hall, UC Davis campus. It's open to all interested persons.

Jackson, who joined the UC Davis doctoral program in September 2015,  investigates behavioral chemicals that repel the walnut twig beetle from landing on English walnut trees. He conducts his research in a commercial orchard near Winters.

Audley says in his abstract: "The walnut twig beetle (WTB) is an invasive bark beetle pest of walnut trees in California and throughout much of its recently expanded range across the North American continent.  Feeding by the beetle and canker development by the associated fungal pathogen, Geosmithia morbida, constitute the progressive and often fatal, thousand cankers disease. Management efforts to protect walnut trees are currently lacking. Here I present work related to understanding and manipulating WTB chemical ecology. First, we investigate the beetle's host-searching behavior in the context of a dense, native riparian forest habitat. The goal was to establish WTB's inflight sensitivity to host and non-host cues. Next, I present the results of flight-intercept behavioral assays of four potentially repellent volatile compounds: limonene, chalcogran, concophthorin and verbenone, first individually and then in compounds in reducing trap captures in the context of WTB aggregation phermone.

"Finally, we tested the most effective combination on whole walnut trees in a commercial, English walnut orchard. We compared beetle landing rates on treated and untreated trees as a correlate for WTB attacks. I report that we effectively reduced the number of WTB landing on treated trees; however, the repellent effect was spatially limited. Thus, further testing is required prior to recommending a management schedule. This work did provide proof of concept of semiochemical interruption in a hardwood attacking bark beetle system."

Audley, on a path to receive his doctorate in entomology this month, studied with Steve Seybold, who tragically died Nov. 15 of heart disease. Seybold was a lecturer and faculty affiliate with the UC Davis Department of Entomology and Nematology and a forest entomologist and chemical ecologist with the Pacific Southwest Research Station, USDA Forest Service, Davis.

A native of Washington, D.C., Jackson spent most of his childhood in Atlanta, Ga. He was first introduced to forest entomology while studying at the University of Georgia, Athens, where he received his bachelor of science in wildlife biology and natural resource recreation and tourism in 2009. He went on to receive his master's degree in forestry in 2015 from the University of Tennessee, Knoxville, where he focused his thesis on managing the walnut twig beetle in cut black walnut logs, live edged boards, and nursery stock.

He recently received the 2019 Western Forest Insect Work Conference Memorial Scholarship Award for his research on the chemical ecology of the walnut twig beetle. 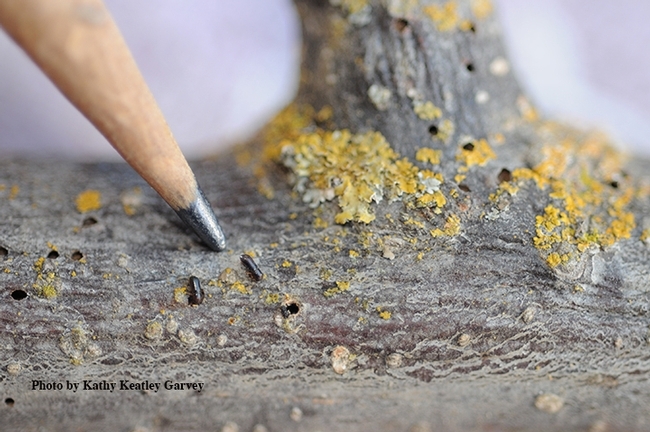