Bug Squad
sitenum=63
Happenings in the insect world
A Monarch Sighting in January? In Sacramento? Yes! But it wasn't in his transect.

Shapiro, who maintains a research website at http://butterfly.ucdavis.edu/, has monitored butterfly population trends on a transect across central California since 1972. The 10 sites stretch from the Sacramento River Delta through the Sacramento Valley and Sierra Nevada mountains to the high desert of the Western Great Basin. The largest and oldest database in North America, it was recently cited by British conservation biologist Chris Thomas in a worldwide study of insect biomass.

But back to the monarch sighting.

As Shapiro tells it in his posse email:  "We had a visitor today--a British journalist--who wanted to go on a site walk. Rancho Cordova was next up. We went in his rental car. We were on US 50, just passing the Tower Theater in Sacramento heading eastbound, when, at 10.30 a.m. (temperature in mid-upper 50s, light North wind, mostly sunny), a Monarch, sex unknown, flew across the freeway in front of us, 20-22' up, from SW to NE. There is no possibility of error, unless I am having visual hallucinations."

Later in the afternoon, Shapiro heard monarch Elizabeth Crone, professor of Tufts University, present a UC Davis Department of Entomology and Nematology seminar on the decline of Western monarchs.

In her seminar, Crone expressed concern about the lack of scientific knowledge about monarchs when they emerge from their overwintering sites along coastal California, usually around February, and head inland.  Her "main punchline was that   we don't know what they're doing between February and when milkweeds break ground later in spring," Shapiro related in his email. "I recommend cruising around in the Coast Range, particularly in Napa and Sonoma counties, looking for them. Of course, this year the total population is so small that the probability of seeing one would be comparable to that on Highway 50 this morning before the fact..."

In a later posse email, Shapiro related that "it turns out we have only one previous January monarch record, and it's from Louie Yang (associate professor, UC Davis Department of Entomology and Nematology), not me, on i.8.2012 in East Davis. There was another record here on ii.19.12. I had one on ii.10.98 in West Davis, near Stonegate. That's it!"

Interestingly enough, Shapiro saw his first monarch of the year before he saw his first cabbage white butterfly of the year! He annually sponsors a contest, "Butterfly for a Beer," or "Suds for a Bug," as part of his research. The first person to collect a live cabbage white butterfly (Pieris rapae) in the three-county area of Sacramento, Yolo and Solano, wins a pitcher of beer or its equivalent. Since 1972, when he launched the contest, the first flight has varied from Jan. 1 to Feb. 22, averaging about Jan. 20. Last year Shapiro collected the contest winner on Jan. 25 near the Suisun Yacht Club, Solano County.

However, as Jan. 29, no sightings and no winner of the 2020 Cabbage White Butterfly Contest.

(Update: Shapiro sighted a cabbage white butterfly on Jan. 30 at the Putah Creek Nature Park, Winters, Yolo County, but did not collect it. He spotted it basking on a malva leaf at 11:16 a.m., but it took off before he could net it. So, since no collection, no voucher, Shapiro did not declare himself the winner. "Now that I know the bug is out, there's no scientific reason to want more records," he wrote in a posse email. "To be fair to potential competitors, the first person to catch a rapae in the contest area before 5 p.m., Sunday, Feb. 2, wins the beer. I will not try to beat them to a voucher." See rules. Shapiro says this was the latest first flight date for Valley rapae since Jan. 31, 2011.) 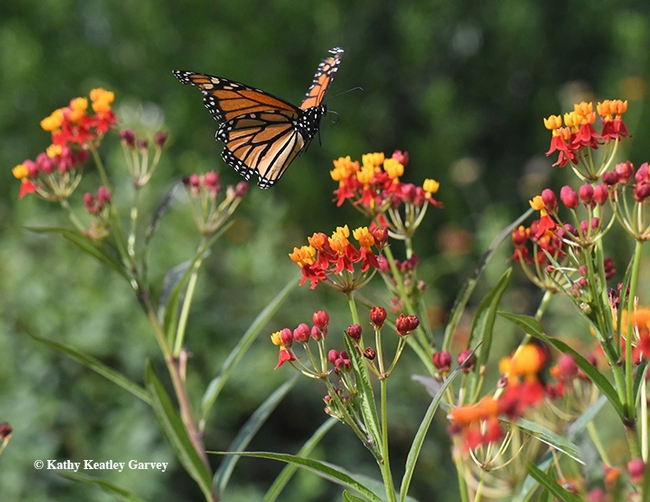 A monarch in flight in the summer of 2017 in Vacaville, Calif. This is the non-native tropical milkweed, Asclepias curassavica.(Photo by Kathy Keatley Garvey)
Focus Area Tags: Agriculture, Economic Development, Environment, Innovation, Natural Resources
Tags: Art Shapiro (250), cabbage white butterfly (46), first sighting (1), monarch butterfly (33), UC Davis (239)
Comments: 1
Comments:
by Diana Magor
on July 25, 2021 at 10:19 AM
The monarchs at the three overwintering sites in Santa Cruz are leaving these sites much earlier (January) than in the past (late February to March). In 2020 they started leaving in January. On Jan. 1, 2021 there were over 500 monarchs overwintering at Natural Bridges State Beach. By Feb 3, only about 20, mostly males, were still there, suggesting that they are migrating from the coast much earlier than in the past, possibly due to high temperatures here in late winter.
At Natural Bridges, over 100 monarchs were counted in early January 2021. On Feb. 3, only about 5 were still there, although there is a fairly large resident population in Santa Cruz, and some are known to roost in winter at Natural Bridges.
Leave a Reply: