Titled "Miss Bee Haven," it anchors the half-acre bee garden, which was installed in the fall of 2009 and named for its primary donor.

Miss Bee Haven, appropriately placed beneath an almond tree in June, 2010, is no lightweight. Anchored with 200 pounds of cement and with six bronze legs drilled into the pedestal, this worker bee is destined to stay put—unlike the thousands of bees that forage from the hives at the nearby Harry H. Laidlaw Jr. Honey Bee Research Facility.

Billick used lost wax bronze casting to craft the six legs, which extend from the thorax to rest on a ceramic “purple dome” aster, fabricated by Davis artist Sarah Rizzo.  The purple dome aster is among the flowers in the garden.

She created the double set of translucent wings with three sheets of fiberglass. The result: wings that are fragile-looking and true to life, but strong.

During this entire process, I developed a real in-depth relationship with honey bees,” Billick told us back in 2010. For inspiration and detail, she visited the Laidlaw facility apiary, read about the functions of bees, and held the thoughts close. “It was not about expressing anything other than the beeness. I have a lot of respect for bees. It was fun and satisfying to do. I learned a ton.”

Billick toyed with a scientific career before opting for a career that fuses art with science. She received her bachelor of science degree in genetics in 1973 and her master's degree in fine arts in 1977, studying art with such masters as Bob Arneson, Roy De Forest, Wayne Thiebaud and Manuel Neri.

Billick traces her interest in an art career to the mid-1970s when then Gov. Jerry Brown supported the arts and offered the necessary resources to encourage the growth of art. He reorganized the California Arts Council, boosting its funding by 1300 percent.

The mid-1990s is when Billick and Ullman began teaching classes that fused art with science; those classes led to the formation of the UC Davis Art/Science Fusion.

The garden, maintained and operated by the UC Davis Department of Entomology and Nematology, is directed by Extension apiculturist Elina Lastro Niño and managed by Christine Casey. It is open to the public from dawn to dusk. Admission is free.

Meanwhile, "Miss Bee Haven" is likely the most photographed bee in the garden. Visitors pull out their cell phones to take a selfie. Children love to touch it and help the younger ones climb to the ledge. Bee scientists marvel at the anatomical accuracy, right down to pollen baskets and stinger. 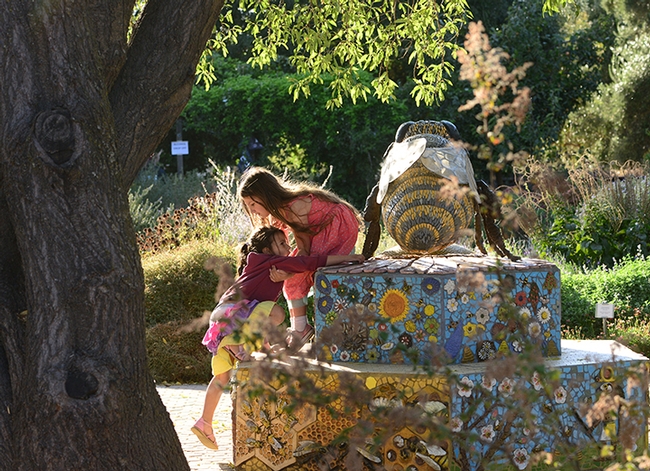 The Häagen-Dazs Honey Bee Haven's "Miss Bee Haven" sculpture is the most photographed bee in the garden. Children love to touch it and climb it. (Photo by Kathy Keatley Garvey) 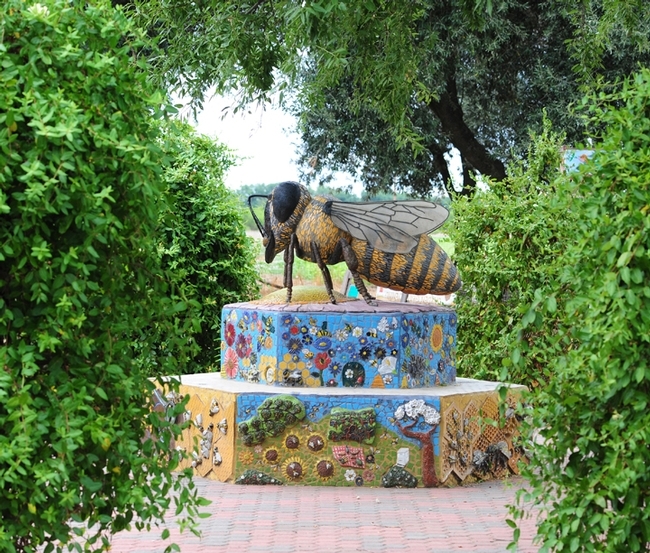