Ten years ago, a California family's food-processing business was booming -- so much so that it was in danger of drowning in its own success. A new idea out of UC Davis helped them stay on top.

In 1983, Gills Onions had been asked by La Victoria Salsa to provide large quantities of high-quality, fresh-cut onions when no automated equipment and processes existed. With typical farmers’ "can do" attitude, brothers Steve and David Gill and their 16 employees developed a system to peel, slice, dice and deliver the first fresh-cut onions in the food processing industry.

By 2000, the Gills and their 400 employees were processing millions of pounds of sliced and diced onions weekly for restaurants, salsa makers and grocery stores. They had become the largest fresh-cut onion processor in the nation.

But they were being buried in onion waste -- the unused tops, tails and skins, which account for about 40 percent of the original onion mass.

Previously, their solution had been to truck these onion leftovers from their Oxnard processing plant to surrounding farm fields and plow them into the soil as compost. But now they had so much waste – up to 1.5 million pounds every week - that this solution had become too costly and environmentally unsustainable.

So they went looking for new ideas. They found them in the bright minds and laboratories of UC Davis research scientists and students.

UC Davis engineering professor Ruihong Zhang, a leading innovator with a passion and genius for turning food waste into energy, determined that onion juice was very good food for methane-producing microbes. With her research data, Gills’ engineers and contractors developed an anaerobic digester system that turns their leftover onions into electricity.

They squeeze the onions, feed the juice to the microbes, and use the methane that the microbes excrete to run a fuel cell that makes electricity.

Today that electricity powers the Oxnard processing plant. This year, they expect to save $700,000 on power bills and $400,000 on trucking costs. (They even sell the squeezed-out onion pulp, as a high-quality cattle food.)

Thanks to Professor Zhang and the University of California, Gills’ waste problem is now an energy source and new product line. The firm expects to make back its $9.5 million capital investment in six years.

And they are famous in the produce and energy industries. People come from all over the world to learn from their experience. They are winning engineering and environmental awards. (They are especially proud of beating the Dallas Cowboys' new $3 billion super-high-tech football stadium in a competition by the American Council of Engineering Companies.)

The help Gills Onions needed with their business problem was available to them, and the rest of the world, in part because California's public research universities get financial support from the private sector. In Ruihong Zhang's UC Davis lab alone, in the seven years she has been perfecting waste-to-energy technology, six donors (including Gills Onions) have given $221,000 to pay graduate student researchers' stipends, tuitions and fees; pay postdoctoral scholars; and purchase bioreactors and laboratory supplies. They also have donated $305,000 worth of equipment.

In fact, California's public colleges and universities have done more to make this state an international agricultural powerhouse than most of us realize. Yet state funding for public universities is unpredictable, and when universities seek philanthropic support, they risk criticism that they are privatizing or selling out – even though private support remains a small percentage of public university budgets (at UC Davis, it’s less than 7 percent).

The University of California needs California businesspeople to support its programs -- with their influence and their wallets. What sector of the state has more to lose if the new ideas dry up? 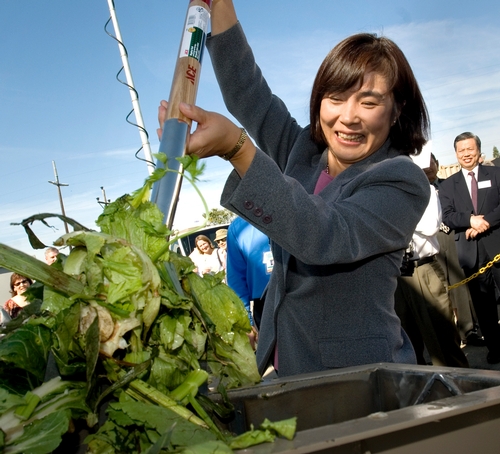