“The fast-track process is designed to facilitate the development and expedite the review of new therapies to treat an unmet medical need in the treatment of a serious condition,” said EicOsis founder and CEO Hammock, who holds a joint appointment with the UC Davis Department of Entomology and Nematology and the UC Davis Comprehensive Cancer Center.

“This designation will enable us to have early and frequent communication with the FDA throughout the drug development and review process,” Hammock said, “and this often leads to faster drug approval and patient access.”

The drug candidate, known as EC5026, targets a novel pathway to block the underlying cause of certain types of pain. Described by EicOsis, a Davis-based company, as a “novel, non-opioid and oral therapy for neuropathic and inflammatory pain,” it inhibits the soluble epoxide hydrolase (sEH) enzyme, a key regulatory enzyme involved in the metabolism of fatty acids. UC Davis recently licensed certain patents supporting the underlying technology exclusively to EicOsis.

The FDA granted EC5026, an investigational new drug (IND) clearance in October 2019. It is currently the subject of a Phase 1a clinical trial in healthy human volunteers. Phase 1b clinical trials are scheduled to begin this fall.

Earlier studies showed that the EicOsis-developed inhibitors reduce inflammatory and neuropathic pain in rodents, horses, dogs and cats, and without the addictive effects associated with opioids or multiple side effects of nonsteroidal anti-inflammatory drugs (NSAIDS).

“Without them, we would not have had the fast track,” Hammock said. “They did a superb job.” William Schmidt, vice president of clinical development
Cortés-Puch worked in Spain in intensive care and emergency units, where she treated patients with acute respiratory distress syndrome (ARDS), and then accepted a position at the National Institutes of Health to study sepsis and ARDS, now targeted as the killer of COVID-19 patients. ARDS is respiratory failure characterized by rapid onset of widespread inflammation in the lungs.

“Listening to patient stories and working with pain management specialists has given me an understanding of the urgent need for new pain medications,” said McReynolds. “It's inspiring to work with such an amazing team in addressing this critical problem and the Fast Track status will allow us to advance this potential treatment as quickly as possible.”

Said Schmidt: “FDA's decision to grant the fast track designation to EC5026 is an important milestone in our ongoing efforts to develop a safe and effective new approach for pain management. We look forward to working closely with the FDA to optimize the development of this novel, non-opioid drug candidate for neuropathic pain.”

Dr. Scott Fishman, vice chair of the UC Davis School of Medicine's Department of Anesthesiology and Pain Medicine, who is not involved with EicOsis, commented: “It is not a coincidence that this FDA fast-track designation comes as the United States is addressing the enormous problem of opioid abuse and is seeking safer and more effective treatment for pain. This FDA designation reflects the substantial promise of this new and novel analgesic drug.”

Nearly 16 million Americans suffer from neuropathic pain, according to the National Institutes of Health (NIH). Physicians often prescribe opioids, which can lead to misuse, addiction and intolerance. Alternatively, the EicOsis drug is an effective, non-addictive drug for pain management, Hammock said.

Every day more than 130 Americans die from opioid overdose, according to the National Institute of Drug Abuse. The total economic burden of prescription opioid misuse alone in the United States is estimated at $78.5 billion a year. That includes the costs of health care, lost productivity, addiction treatment, and criminal justice involvement.

“I know my patient is suffering and sadly I know I've gone through everything available to help,” said rheumatologist Laura Carbone, professor and division chief of rheumatology in the Department of Medicine, Medical College of Georgia, Augusta University. “I struggle, we both struggle, to find a way to make today better as we both hope for something better to come that will really help. That is the daily reality of pain.” She is not involved with EicOsis.

NIH has financially supported the discovery and development of EC5026 and its advancement into clinical trials through the Blueprint Neurotherapeutics Network (BPN) of the NIH Blueprint for Neuroscience Research and the NIH's Helping to End Addiction Long-term (HEAL) Initiative.

Hammock, a member of the UC Davis faculty since 1980, received his doctorate in entomology and toxicology from UC Berkeley. Nationally recognized for his achievements, he is a fellow of the National Academy of Inventors, which honors academic invention and encourages translations of inventions to benefit society. He is a member of the U.S. National Academy of Sciences, a fellow of the Entomological Society of America, and the recipient of scores of awards, including the first McGiff Memorial Awardee in Lipid Biochemistry; and the Bernard B. Brodie Award in Drug Metabolism, sponsored by the America Society for Pharmacology and Experimental Therapeutics.

The UC Davis professor traces the history of his enzyme research to 1969 during his graduate student days in the John Casida laboratory, UC Berkeley.  Hammock was researching insect developmental biology and green insecticides when he and colleague Sarjeet Gill, now a distinguished professor at UC Riverside, discovered the target enzyme in mammals that regulates epoxy fatty acids. 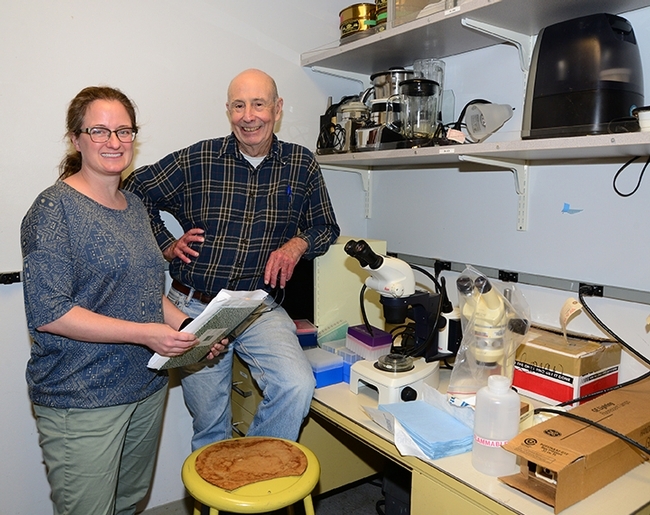