I was out in the field today and drove by this fallow field and did two things. First, since I'm a weed scientist, I stopped to take a photo of this weedy streak.  Second, because I know the site manager and know he hates weeds, I called to give him a hard time about "missing one".

Any guesses on what happened here?  It might help if I told you I'm facing south and this area often has a prevailing wind out of the northwest during winter and early spring.  Another clue would be the construction site to my back with minimally managed weeds.  One more clue might be the fence behind me still loaded up with Russian thistle carcasses and debris.

Here's a link to the UC-IPM Pest Note (Pub 7486) on Russian thistle.   That document indicates "Russian thistle normally matures in late summer. The seed is spread when mature plants detach at the base and are blown along by the wind. A large Russian thistle plant may produce more than 200,000 seeds. In spring, months after their dissemination, it is possible to trace the paths of tumbleweeds across plowed fields by the green trails of germinating Russian thistle seedlings."

I think we have a winner!  Looks like a handful of Russian thistles, one of our common "tumbleweed" species in California went rolling across this landscape earlier in the spring scattering seeds as it made its merry way to the next fenceline. 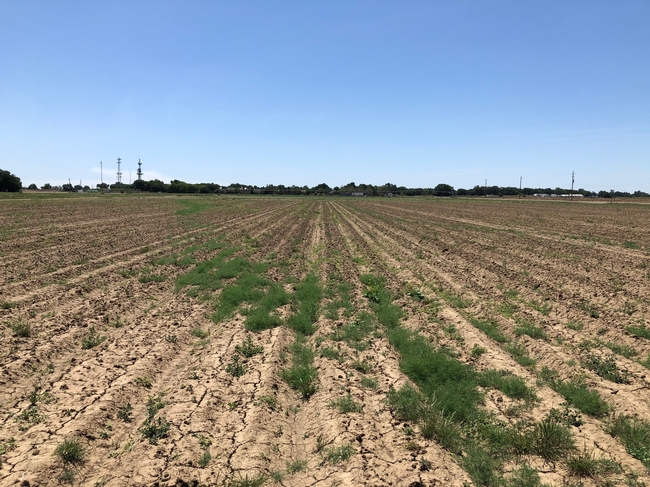 Good photo. Probably one of the "tumbleweeds" meandering across the field and spreading its seed on the way. FYI, Harry Agamalian has a similar great photo meandering across a seedling vegetable field in the Salinas Valley.
Leave a Reply: