UC Davis-trained entomologist Matan Shelomi, assistant professor of entomology at the National Taiwan University in Taipei, Taiwan. He teaches a popular course on “Edible Insects.
They don't taste like chicken.

The larvae and pupae of the Asian giant hornet taste like French fries.

So says UC Davis-trained entomologist Matan Shelomi, assistant professor of entomology at the National Taiwan University in Taipei, Taiwan, whose course on “Edible Insects” is the largest in his department.

The world's largest hornets (they can measure approximately 2 inches in length),  they attack and kill honey bees and feed the remains to their young. They can decimate a hive. Thus, beekeepers worry that AGH will invade North America, become established, and cripple the apiculture industry. The Washington State Department of Agriculture and Washington State University Extension are asking residents to keep a lookout for them and report any sightings. (See WSU Extension Fact Sheet.)

The newly acquired nickname, "murder hornet," triggers fear. But amid the panic, terror and near hysteria, it's important to point out that there is NO national invasion and they are NOT coming for us.

This insect was previously known as the Asian giant hornet or AGH before the BBC, the New York Times and other media labeled it "the murder hornet.”

Indeed, the BBC report on May 4 managed to insert "coronavirus," "murder hornets" and "terror" in the same sentence. The lede:  “Even as the US remains under attack from the coronavirus outbreak, a new terror has arrived: 'murder hornets.'"

On the newly created Facebook page dispelling the myths and misinformation about the giant hornet, Shelomi posted photos of Vespa mandarinia larvae and pupae dishes, "raw and fried, from a small restaurant in Hualien in eastern Taiwan. You can also find it in the Huaxi night market in Taipei, if it's in season.”

“Several bee and wasp species have edible brood, which can be fried, steamed, roasted, cooked with soy and sugar, or eaten raw,” Shelomi wrote. “Even honey bee brood is edible! While it's not exactly commonplace, Asian giant hornet has been or is still consumed in parts of China, Japan, Taiwan, and northeastern India." (Source: "Edible Insects of the World" by Jun Mitsuhashi)

“To get the brood, you must harvest the nest. ‘Isn't that dangerous,' you ask? Yes, in the same way extracting honey is dangerous. Stay safe by collecting at night when they are resting, using smoke to pacify them, and wearing protective clothing. To find the nests of edible wasps, Japanese harvesters tie a cotton ball to a piece of fish meat and present it to a female wasp. She will carry it home, and you can follow her to find the nest! That's a bit harder with the giant hornet, as they can travel 2km on their foraging runs. They are not exactly rare in East Asia [for now], so those in the know can find nests easily. A helpful trick is to harvest the adults first. At night, knock down the nest, put a big bowl of rice wine in front of the entrance, and shine a bright light. The wasps get stunned by the light and fall into the wine. You can then harvest the adults and steep them in wine to make a medicinal alcohol, and take the brood as a snack. Who's murdering who now!"

“Oh, and insects cannot get any coronaviruses, so don't worry about that either. Save a pangolin; eat a wasp." 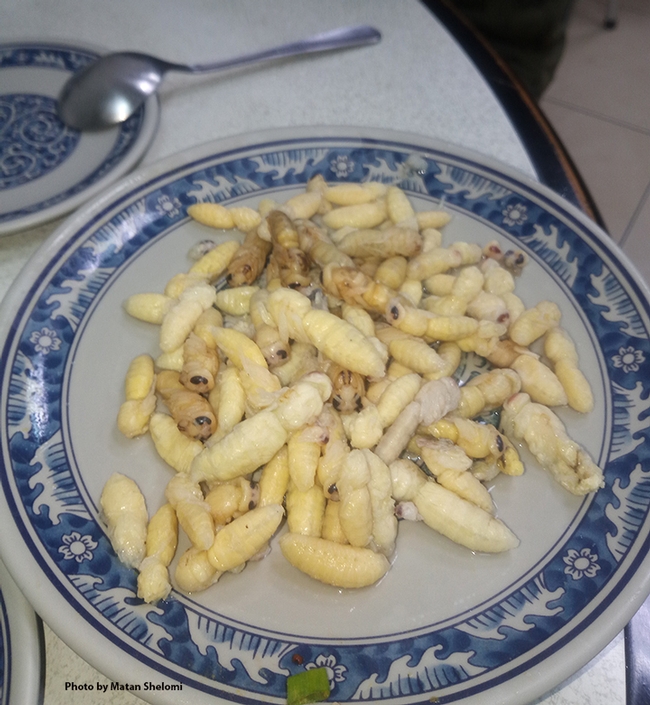 A blue plate special: larvae of the Asian giant hornet. This image is of food served in a restaurant in eastern Taiwan. (Photo by Matan Shelomi) 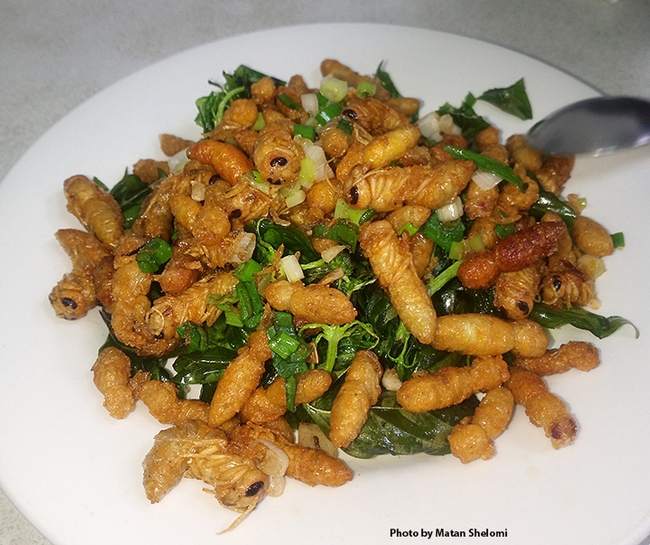