This illustration appears in the Shahid Siddique-Clarissa Hiltl column in the scientific journal, Nature Plants.
When you think of potatoes, your thoughts probably turn to baked potatoes, French fries, the "one-potato-two-potato" game, or "couch potatoes" (especially during the sheltering-in mandates).

You're not thinking of root-knot nematodes, major pests of potatoes.

But potato growers and nematologists are.

So are the editors of the scientific journal, Nature Plants. Their current edition showcases research on root-knot nematodes by Washington State University (WSU) scientists Lei Zhang and Cynthia Gleason, and a commentary by UC Davis nematologist Shahid Siddique and colleague Clarissa Hiltl of the University of Bonn, Germany.

“Plant-parasitic nematodes are among the world's most destructive plant pathogens, causing estimated annual losses of $8 billion to U.S. growers and of nearly $78 billion worldwide," according to Siddique, an assistant professor in the UC Davis Department of Entomology and Nematology.

“Most current control methods rely on chemical nematicides, but their use is increasingly limited due to environmental concerns," Siddique and Hiltl wrote in their News and Views column, New Allies to Fight Worms.

It's better to build up the host plant's immune system rather than directly target the pathogen with chemical nematicides which “are highly toxic and have negative effects on the ecosystem," Siddique told us.

The WSU scientists demonstrated the effective use of Peps to combat root-knot nematodes in potato (Solanum tuberosum). They engineered a bacteria, Bacillus subtillis, to secrete the plant-defense elicitor peptide StPep1.  They wrote that pre-treatment of potato roots “substantially reduced root galling, indicating that a bacterial secretion of a plant elicitor is an effective strategy for plant protection."  (See article.)

According to the UC Statewide Integrated Pest Management Program (UC IPM), root-knot nematodes "usually cause distinctive swellings, called galls, on the roots of affected plants. Infestations of these nematodes are fairly easy to recognize; dig up a few plants with symptoms, wash or gently tap the soil from the roots, and examine the roots for galls. The nematodes feed and develop within the galls, which can grow as large as 1 inch in diameter on some plants but usually are much smaller."

"Nematodes are too small to see without a microscope," UC IPM points out. "Often you become aware of a nematode problem by finding galled roots on a previous crop. However, you also can use a simple bioassay to detect root knot nematodes in garden soil. Melons seeded in pots in moist soil collected from the garden will develop visible galls on the roots in about 3 weeks when pots are kept at about 80ºF if root knot nematodes are present. As a comparison, melons planted in heat-sterilized soil won't develop galls." 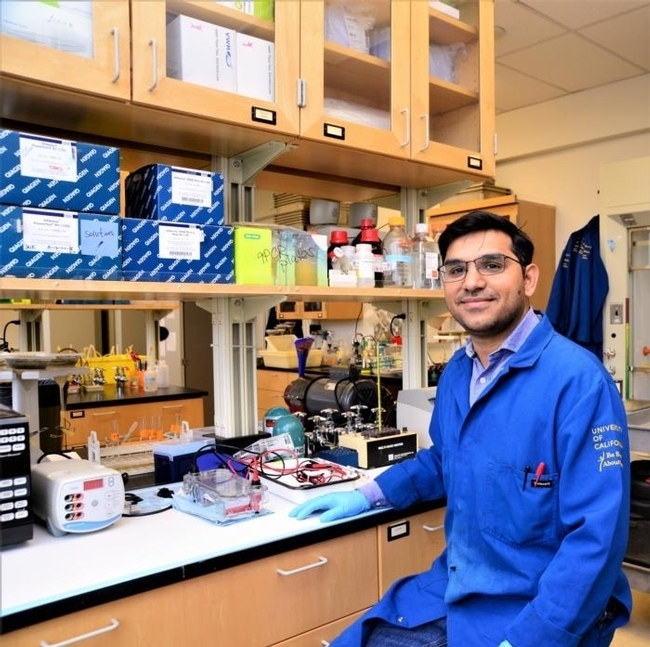 UC Davis nematologist Shahid Siddique. (Photo by Kathy Keatley Garvey)
Focus Area Tags: Agriculture, Economic Development, Environment, Food, Innovation
Tags: journal Nature Plants (1), potatoes (1), root-knot nematodes (2), Shahid Siddique (21), UC Davis Department of Entomology and Nematology (580), UC IPM (48), Washington State University (27)
Comments: 2
Comments:
by Theresa Halula
on June 11, 2020 at 10:50 AM
Is this engineered a bacteria, Bacillus subtillis, to secrete the plant-defense elicitor peptide StPep1. commerically available?
by Kathy Keatley Garvey
on June 15, 2020 at 5:20 PM
From researcher Cynthia Gleason of Washington State University: cynthia.gleason@wsu.edu: To answer your question – the product is not commercially available. However, we do have a provisional patent application for the technology, so if anyone is interested in commercialization, they should get in touch with me.
Leave a Reply: