Rhonda Smith has been heralded as the “heroine of the vineyards” for her groundbreaking work in helping combat the parade of pathogens and other problems that have plagued grapevines – and alarmed growers - during her more than 30 years as Sonoma County's viticulture advisor.

A scientist first and foremost, Rhonda steadily emerged as Sonoma County's resident expert on all things wine grape during her nearly 34 years as the viticulture advisor for the University of California Cooperative Extension. Over the decades, she used her scientific know-how, meticulous research methodology and incredible work ethic to advance wine grape production in Sonoma County.

She cultivated real working relationships with growers and vineyard managers during her time setting up field trials and collecting data in vineyards throughout Sonoma County. As the years rolled by, she earned the respect and admiration of grape growers who wonder what they will do without her as she leaves her longtime post and heads into retirement.

Tito and Janet Sasaki who farm wine grapes in the Sonoma Valley are among the growers who have benefited from Rhonda Smith's dedication to the wine grape industry. The Sasakis said Rhonda is continually studying the latest developments in viticulture science but is always ready to be in the field to help growers – often at a moment's notice when a new problem crops up.

“Rhonda Smith is the quiet heroine of the vineyards in Sonoma County. She has been the family physician of Sonoma County vines for more than three decades,” said Tito Sasaki, past president of Sonoma County Farm Bureau and a longtime agriculture industry leader. He marvels at how Rhonda has managed the challenges of raising a family while coming to the rescue of growers facing problems like red blotch virus, vine mealybug, Pierce's disease and many other threats.

“Her serene and relaxed demeanor conceals the rock-solid strength of her dedication to others,” Tito said.

Said Janet Sasaki, “Rhonda is the hardest working person I know. My friends and I have been working with her since 1989. No vineyard is too small for her to take an interest in the problem. She is very respected by everyone in the wine grape industry.”

For her part, Rhonda, who is 66 and the mother of two grown children, said she has been fortunate to work in a field she loves, particularly, being able to focus so much of her time and energy on plant pathology, which has intrigued her since her days as a student at the University of California, Davis. She was inspired by professors and Cooperative Extension farm advisors who used scientific research to find ways to combat the diseases that were impacting agriculture and causing economic losses to farmers.

Becoming the viticulture advisor in Sonoma County gave her the opportunity to do the research she loved while providing the best possible opportunities for growers to thrive and produce the world class wines that have made Sonoma County famous. She said her goal has always been to assist the industry in successfully navigating the delicate balance between grape quality and economically acceptable crop yields – the essential combination to prosper as a premium grower of wine grapes.

“It's been fun and rewarding to be part of the Sonoma County wine industry for so many years,” said Rhonda, a resident of Windsor. Over the years she has been recognized with awards and accolades for her many contributions. In 2008 the Harvest Fair board of directors named her “Friend of Agriculture,” noting her hard work “to keep agriculture part of the Sonoma County landscape.”

Rhonda arrived in Sonoma County in 1986 to fill the UCCE viticulture advisor position held for many years by Robert Sisson, who had helped orchestrate Sonoma County's transition to premium varietals like chardonnay and cabernet sauvignon. It was a move that took Sonoma County from jug wine producer to a celebrated player on the world's wine stage.

Realizing the importance of maintaining quality and economic viability for Sonoma County's most important farming endeavor, Rhonda rolled up her sleeves and plunged into research and grower outreach to assist the viticulture industry as it faced continued new threats.

Shortly before starting as viticulture advisor, there was a crisis: vineyards throughout Sonoma and Napa counties were in decline, displaying lackluster vigor and sharp drops in yields. The culprit was phylloxera, a tiny insect that feeds on grapevine roots.

Growers desperately needed a path forward. Rhonda and other scientists from UC Davis launched trials to evaluate the performance of alternative rootstocks for vineyards in the North Coast counties.

Through her rootstock trials, Rhonda was able to inform growers of the suitability of specific rootstocks in sites with heavy, cracking clay, wet soil conditions and high nematode populations.

Stephanie Larson, who is the director of UCCE in Sonoma County, said Rhonda Smith's targeted work on so many important issues epitomizes what a UCCE advisor should be – diligent and dedicated to finding solutions to growers' problems and channeling information and research from the University to the field. She said Rhonda's work spanned the spectrum from identifying the best rootstocks to coping with powdery mildew.

“Rhonda was a solid advisor who was extremely dedicated to the wine grape industry. She held UCCE Sonoma County Grape Day each year, without exception since 1987. Grape Day provided growers the most current information on issues such as pests, water, diseases, clones and rootstocks,” said Larson.

For 20 years Rhonda also coordinated the Sonoma County Vineyard Technical Group's nine monthly programs each year, working collaboratively with grower-members to select topics and speakers – including those from out of state - to bring research-based information that addressed farming practices and pest management applicable to the local industry.

“Throughout her career, Rhonda collaborated with state and local regulatory and resource agencies to provide expertise on issues that directly affect wine grape production,” Larson said.

Larson said Rhonda's retirement leaves a huge gap in viticulture knowledge and expertise for the industry. Unfortunately, she said, because of the state's current budget crisis, the UC Division of Agriculture and Natural Resources will not be filling Rhonda's position. But Larson said the University would entertain a discussion with the wine industry to hire a new viticulture advisor if the industry would fund half the cost of the position. She said there must be a five-year commitment for the funding.

Rhonda, who came from a military family, grew up in El Dorado Hills outside of Sacramento. She didn't have a farming background but early on knew she wanted to work outside, not in an office cubicle, after spending time at her uncle's walnut and hog ranch in Galt.

Before taking the viticulture position in Sonoma County, she worked as a research associate for UC Davis, UCCE and the Department of Food and Agriculture in various parts of California.

Rhonda said her work in Sonoma County was more expansive and productive because of the tremendous cooperation of growers, vineyard managers and wine industry executives who provided vineyards and support for the field trials she conducted. She worked with dozens of vineyard industry professionals during her long career, often, bonding over mutual interests in chardonnay clones or vexed by the vagaries of Pierce's disease, caused by a bacterium spread by the blue-green sharpshooter.

Mark Lingenfelder, who was at Chalk Hill Estate Winery for many years, worked with Rhonda on a number of projects including chardonnay clonal studies and trials investigating the efficacy of a plant growth regulator to improve fruit set. Lingenfelder said because of Rhonda's expertise and professionalism it was a pleasure cooperating and collaborating on research trials that yielded valuable information that was shared with the viticulture industry.

“I was always amazed by Rhonda's energy, persistence and meticulous attention to detail. But she was not only a dedicated and tireless researcher. She was also a friendly, knowledgeable and patient advisor who was always incredibly generous with her time whenever I turned to her for advice,” said Lingenfelder. “We've had some great long conversations.”

Dana Grande, grower relations manager at Jordan Vineyard & Winery in Healdsburg, said she first met Rhonda Smith in 1994, a time when there were few women working in the viticulture industry.

“At that time, you could count the number of women in Sonoma County viticulture on one hand. Our relationship has always been one of mentorship – her to me - and it encompassed not only viticulture expertise, but how to carefully balance the career/mom life,” said Grande.

From 2002 to 2008 Grande worked with Rhonda on a study of berry shrivel in a cabernet sauvignon block, which was known as “Rhonda's Rows,” at Jordan. The collaboration forged a long, lasting relationship and mutual respect between the two viticulture professionals.

“I can't imagine what Sonoma County viticulture will look like without Rhonda Smith,” said Grande. “I and many others have relied on her advice, experience, and expertise for decades.”

In retirement, Rhonda plans to take a deep breath and then catch up on projects around the house and do some traveling. She will also have more time to spend with husband Dana and her grown children. Her daughter Emma, 29, is a US Air Force Captain and a Medical ICU nurse now preparing for her second deployment to the Middle East. Son Charles, 26, recently graduated from Chico State University with a degree in criminal justice and is seeking a job in law enforcement.

And at some point, Rhonda plans to sit back and reflect on her long and fruitful career while savoring Sonoma County wines.

Like many who appreciate wine, Rhonda is intrigued by the sensory elegance of what wine grapes become when entrusted to the hands of a masterful winemaker. “I appreciate the growers who provide wineries with the best fruit possible by making critical farming decisions driven by experience, knowledge and research based information.”

“Sonoma County has an ideal climate for growing wine grapes, but it is up to growers to establish then farm a vineyard with a balanced crop load, adequate soil moisture and canopies that maximize desired fruit composition. All that while managing pests, diseases and labor shortages.

I feel honored to have been able to work with
the people who are in this industry.” 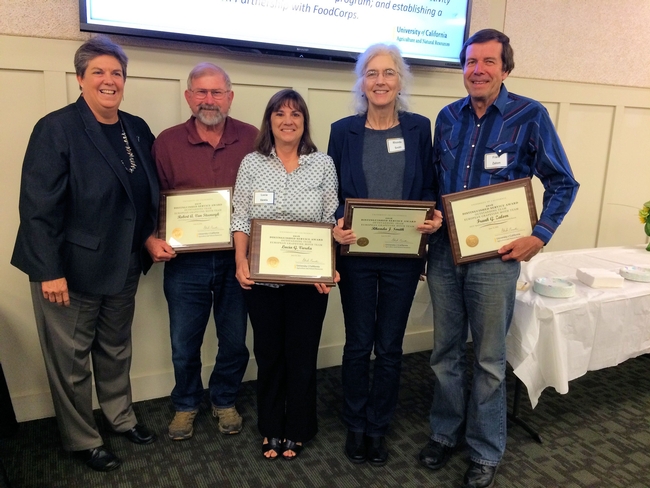 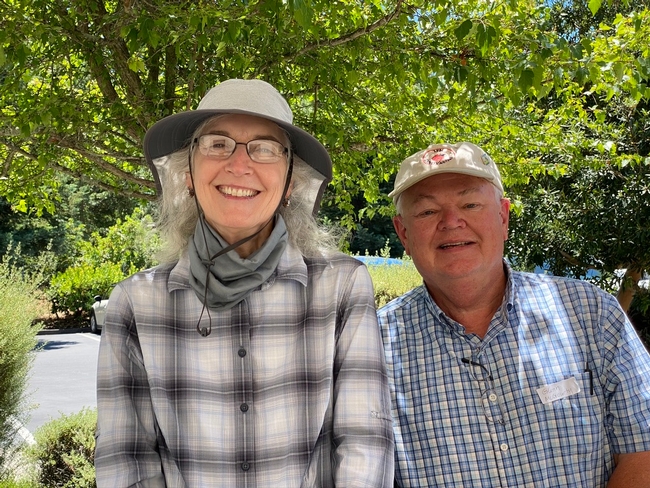