“Generating and preserving surface residues on the soil – despite being one of the core principles of just about all of the soil health movements and government programs these days – has had very little play in most agricultural fields in California now for nearly ninety years.” That stark assertion come from experienced Cropping Systems Extension Specialist and leader of the State's Conservation Agriculture Center, Jeff Mitchell, who's been in the trenches tinkering with systems that couple residue-preserving and reduced disturbance practices for nearly 30 years.

“The body of research knowledge and experiences on the values of high residue systems is enormous,” Mitchell says, “ and yet most folks in California have not come around to them.” Scientific theory supports the role of residues in reducing soil water evaporation and weed emergence, cooling the soil, and increasing soil carbon gain. “And this theoretical underpinning is now guiding our expanded work with high residue systems to better understand the value they may have in improving biodiversity as well as the efficiency of the carbon, nitrogen and water cycles in California's food production systems,” says Mitchell about the new work that is now underway at several farm study sites throughout the State.

Most annual crop fields that you'll drive by in California typically have close to zero residue on them. “Residues are pretty much managed to make them disappear,” Mitchell observes. Yet, several studies from both irrigated and rainfed regions around the US and including our own work in Five Points have shown that when no-tillage is coupled with high residues, annual irrigation savings can be as much as 4 to 5 inches. In several areas including the Central Great Plains of the US, no-till, high residue practices have positively affected agricultural management and local farm economies with both the intensification and diversification of cropping systems. “What we're doing at this point is trying to figure out just how these residue practices might actually work in various California production systems and minimizing risks associated with transitioning to them.”

More information on these types of systems will be shared on July 23rd as part of the Desert Southwest Soil Health Webinar (https://www.eventbrite.com/e/desert-southwest-soil-health-webinar-tickets-107732693386), slated for July 23rd from 8 AM through 6 PM.

High residue, no-tillage and cover cropped surface soil conditions achieved in 21-year conservation agriculture research study in Five Points, CA showing the extent of residue cover that can be achieved when these practices are coupled together. 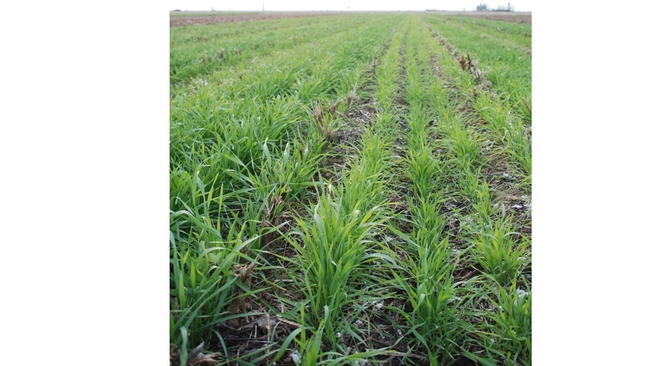