Dipak Panigrahy, lead author
A research commentary on how a drug discovered in the laboratories of Professors Charles Serhan of Harvard Medical School and Bruce Hammock of the University of California, Davis, may control the body's inflammatory response to COVID-19 is the most downloaded article in the history of the journal Cancer Metastasis and Reviews (CMR), a Springer Nature publishing group. The drug stabilizes two groups of natural chemical mediators.

As of July 8, the commentary, “Inflammation Resolution: a Dual-Pronged Approach to Averting Cytokine Storms in COVID-19?”—the work of a nine-member team of Harvard University and UC Davis researchers—has been downloaded 11,444 times since its publication May 8, 2020. It is online at https://rdcu.be/b33IN.

In comparison, the most downloaded publication in CMR in 2019 received 5,712, statistics show.

“COVID-19 results in excessive inflammation and a cytokine storm caused by the human body's reaction to the SARS-CoV-2 virus,” said lead author Dipak Panigrahy, a Harvard University physician and researcher who collaborates with the Hammock laboratory.

“Controlling the body's inflammatory response to COVID-19 will likely be as important as anti-viral therapies or a vaccine,” Panigraphy said. “Stimulation of inflammation resolutions via pro-resolution lipid mediators that are currently in clinical trials for other inflammatory diseases is a novel approach to turning off the inflammation and preventing the cytokine storm caused by COVID-19.” Bruce Hammock, UC Davis distinguished professor
“We propose that this drug will alleviate the cytokine storms that occur when the immune system is overwhelmed, when the patient is battling for survival,” Panigrahy said.

The drug is an inhibitor to the soluble epoxide hydrolase (sEH) enzyme, a key regulatory enzyme involved in the metabolism of fatty acids.

Panigraphy and Hammock said they are receiving “tons of calls, media requests and emails” from all over the world, including Norway, Japan, United Kingdom, Germany, France, Mexico and Belgium.

Pioneering research from the Panigrahy and Hammock labs shows that cell debris from surgery, chemotherapy, toxin exposure and other causes lead to production of high levels of pro-inflammatory mediators commonly called cytokines as well as eicosanoids. Professor Charles Serhan
“The tremendous cell destruction caused by COVID-19 in the lungs leads to cell debris, activating a series of events leading to the cytokine storm and mortality,” Panigrahy said. “Controlling inflammation is key to resolving any intense infection, and thus, desired treatments should modulate and particularly resolve inflammation.”

“A rapid immune response is critical to controlling this virus,” Panigrahy emphasized.

“We believe it holds promise to combat the inflammation involved with this disease,” said co-author Hammock, a UC Davis distinguished professor who holds a joint appointment with the Department of Entomology and Nematology and the UC Davis Comprehensive Cancer Center.  “It hit me in March that what we really need to do is not so much block cytokines as to move upstream to modulate them and resolve them rather than block inflammation.”

“We can increase the concentration of natural pro-resolving mediators termed EETs which act on a biological system to produce other pro-resolution mediators which modulate inflammation and actively resolve the process,” explained Hammock, who founded the Davis-based company EicOsis Human Health LLC, to bring the inhibitor to human clinical trials, which are underway in Texas.

“It is this resolution of inflammation and the subsequent repair that is critical to restore patient health,” said Serhan, whose studies with collaborator Sime show that immune resolution and repair are active processes in the lungs and other tissues. What drives the process, Serhan said, is the production of specific pro-resolving agents (SPMs).

Other co-authors of the paper are Molly Gilligan and Allison Gartung of  the Panigrahy lab; Sui Huang of the Institute for Systems Biology, Seattle; and Richard Phipps, independent scholar, Richmond, Va. 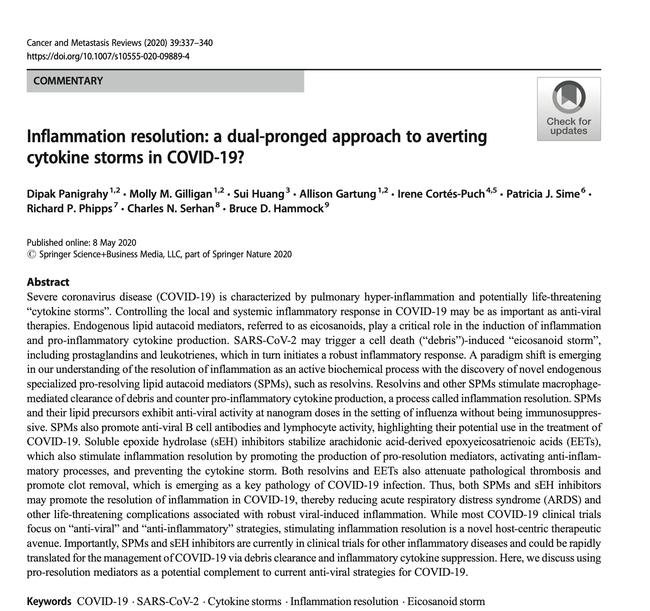