Robert E. Page Jr., a renowned bee geneticist and biologist, is the author of a newly published book, "Art of the Honey Bee."
You often hear that foraging honey bees are either pollen specialists or nectar specialists. That is, some leave the hive to collect pollen for their colony, and some to collect nectar.

Renowned bee geneticist and biologist Robert E. Page Jr., who maintains strong ties to UC Davis and Arizona State University,  clarifies this in his newly published book, The Art of the Honey Bee; Shaping the Environment from Landscapes to Societies.

"Foraging honey bees are often grouped into pollen or nectar specialists," Page writes. "However, many or most foragers collect both pollen and nectar. Some bias their foraging toward collecting nectar, others toward pollen. A bee with a strong nectar forging bias accidentally brushes against the anthers of a flower and get pollen on her body hairs while she probes the nectary. After collecting nectar, she grooms herself and stores a small amount of pollen on her hind legs. When she returns to the nest, she brings a load of nectar and a small amount of pollen."

Page points out that foragers have "loading limits." Loading limits: isn't that a wonderful description, especially when you see a honey bee weighted down with a huge ball of pollen?

"Pollen and nectar collecting are intimately related because of loading limits experienced by foragers," Page relates in his 256-page book, 25 years in the making. "A fully loaded bee collecting only nectar can carry about 60 milligrams (mg). A fully loaded pollen forager carries about 30 milligrams."

In his book, published by Oxford University Press, Page covers honey bees as environmental artists, responsible for the "brilliantly colored flowers in our landscapes," and as engineers, engineering "the niches of multitudes of plants, animals and microbes."

The book, chock-full of information, is both well-written and comprehensive. It's a "must have" for anyone who wants to learn more about bees and understand them. Page writes in an easy-going, easy-to-understand style.

“But don't be fooled by the amiable and personal style—the book is comprehensive—from colony collapse disorder to colony-level evolution—and chock full of the latest results, presented with clarity and depth, leavened with razor-sharp insights into social evolution,” noted Gene Robinson, director, Carl R. Woese Institute for Genomic Biology and Department of Entomology, University of Illinois at Urbana-Champaign.

The book, Page says, is geared toward  “the person who has a basic knowledge of biology and a fascination with bees, perhaps an educated hobby beekeeper--there are a lot of them--or an undergraduate or graduate student with an interest.”“

The internationally renowned bee geneticist is known for his research on honey bee behavior and population genetics, particularly the evolution of complex social behavior. One of his most salient contributions to science was to construct the first genomic map of the honey bee, which sparked a variety of pioneering contributions not only to insect biology but to genetics at large.

UC Davis named him the 2019 distinguished emeritus professor. Nominator Steve Nadler, professor and chair of the UC Davis Department of Entomology and Nematology, praised Page as “a pioneer researcher in the field of behavioral genetics, an internationally recognized scholar, a highly respected author, a talented and innovative administrator, and a skilled teacher responsible for mentoring many of today's top bee scientists…he is arguably the most influential honey bee biologist of the past 30 years.”

Page received his doctorate in entomology from UC Davis in 1980, and joined the UC Davis faculty in 1989. in 2004, when he was chair of the Department of Entomology, Arizona State University (ASU) recruited him for what would become a series of top-level administrative roles. He advanced from director of the School of Life Sciences to dean of Life Sciences; vice provost and dean of the College of Liberal Arts and Sciences; and university provost. Today he holds the titles of provost emeritus of ASU and Regents professor emeritus, as well as UC Davis department chair emeritus, professor emeritus, and UC Davis distinguished emeritus professor.

Highly honored by his peers, Page is an elected member of the American Academy of Arts and Sciences, the Brazilian Academy of Science, Leopoldina (the German National Academic of Science), and the California Academy of Science. He is a recipient of the Alexander von Humboldt Senior Scientist Award (Humboldt Prize, 1995), the Carl Friedrich von Siemens Fellowship (2013), James W. Creasman Award of Excellence at ASU (2018). 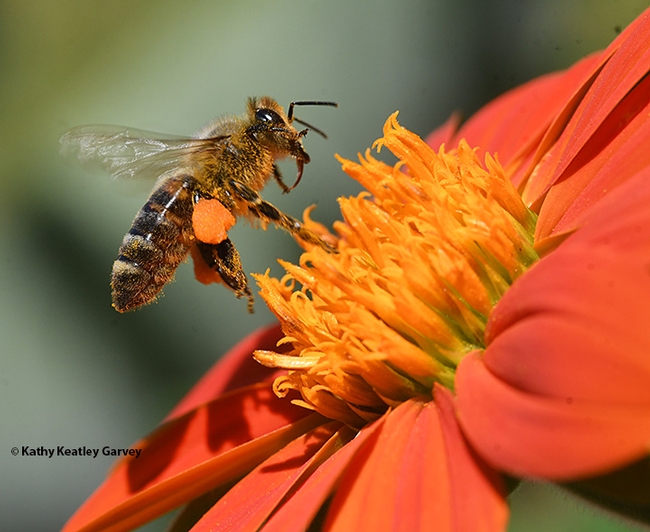 A honey bee foraging on a Mexican sunflower (Tithonia) has almost reaching its loading limit. (Photo by Kathy Keatley Garvey) 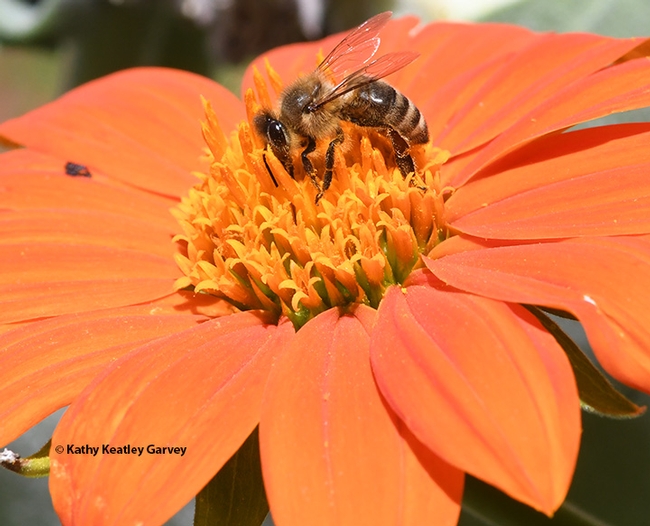