It's Thursday afternoon, Aug. 20, and it seems like a good time to run a photo of a Gulf Fritilliary.

Because it just is.

It is a joy to see, especially when joy seems elusive as out-of-control wildfires ravage California.

As butterfly guru Art Shapiro, distinguished professor of evolution and ecology at UC Davis says about Agraulis vanillae on his website:

"This dazzling bit of the New World Tropics was introduced into southern California in the 19th Century--we don't know how-- and was first recorded in the Bay Area before 1908, though it seems to have become established there only in the 1950s. It can be quite common in the East and South Bay --particularly in Berkeley-- and has been found breeding spontaneously as far inland as Fairfield where, however, it is not established. There are scattered records in the Central Valley and even up to Folsom, perhaps resulting from people breeding the species for amusement or to release at social occasions. According to Hal Michael, who grew up in South Sacramento, this species bred there in abundance on garden Passiflora in the early 1960s. It seems to have died out by the early 1970s, however. Intolerant of hard freezes, it still managed to survive the record cold snap of 1990 that largely exterminated the Buckeye regionally!"

"In the Bay Area this species can be seen flying any day of the year, if it is warm and sunny enough," says Shapiro, who has been monitoring the butterfly populations of Central California since 1972 and posts the information on his website.

And if it's "warm and sunny enough," and you're growing Mexican sunflower (genus Tithonia rotundifolia), be sure to capture an image of a dazzling Gulf Fritillary nectaring on that equally dazzling blossom.

Both are a joy to see. 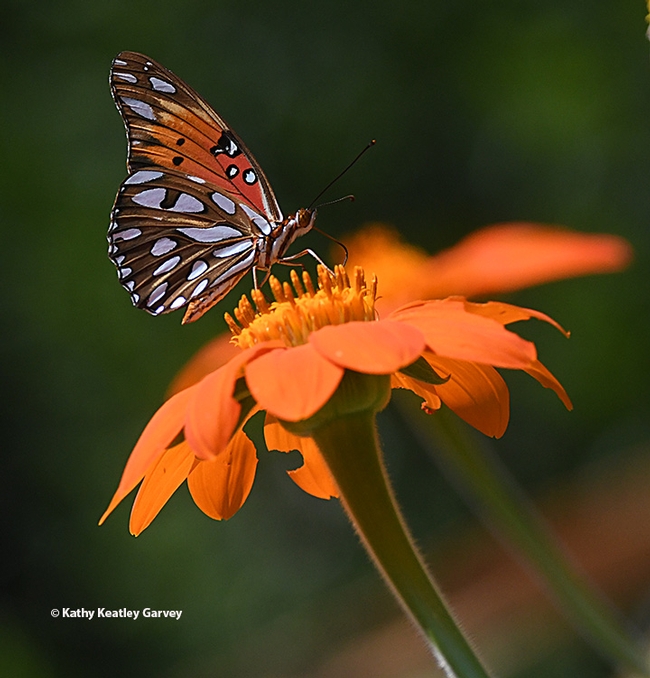 Thanks, Bob
by Lee W. Miller
on August 21, 2020 at 10:54 AM
I have enjoyed this butterfly here in Stockton for several years. My neighbor had a lot of passion vine which it seems was recently removed, but not before I established one in my own yard to feed the caterpillars now and for years to come I hope.
Leave a Reply: