But no, we can't protect them because we don't have the money.

That's the gist of what the U.S. Fish and Wildlife Service (USFWS) said today.

USFWS director Aurelia Skipwith announced in a news release: "We conducted an intensive, thorough review using a rigorous, transparent science-based process and found that the monarch meets listing criteria under the Endangered Species Act. However, before we can propose listing, we must focus resources on our higher-priority listing actions. As part of the decision, monarchs' status will be reviewed each year by the agency and conservation efforts will continue."

The monarch population is declining at an alarming rate--both the Western population, which overwinters along the California coast, and the Eastern population, which overwinters in central Mexico. Since the 1990s, monarchs have declined by approximately 80 percent in central Mexico, and by 99 percent in coastal California, scientists say. The threats impacting the monarchs? "Habitat loss and fragmentation has occurred throughout the monarch's range. Pesticide use can destroy the milkweed monarchs need to survive," USFWS says. "A changing climate has intensified weather events which may impact monarch populations."

Will there be a time when we no longer see the iconic monarchs fluttering into our yards, laying eggs on our milkweed and sipping nectar from our plants? Will they go extinct like the Xerces blue butterfly, Glaucopsyche xerces, last seen in the early 1940s in the San Francisco Bay area?

What can we do to protect the monarchs from extinction?

We can all do our part by planting milkweed, nectar-rich flowers (especially important during their migration) and avoiding all pesticides. We can also get involved with organizations such as the Xerces Society for Invertebrate Conservation, which monitors the monarch populations and offers advice and suggestions.  See https://xerces.org/monarchs.

As Xerces points out: "The Xerces Society, government agencies, partner organizations, and communities are working across the U.S. to protect and restore habitat for monarch butterflies across a broad array of landscapes, provide workshops and educational resources on monarch conservation, and conduct research—including facilitating community science projects like the Western Monarch Thanksgiving Count and the Western Monarch Milkweed Mapper."

When the monarchs overwinter, they cluster to keep warm. Is it too much to ask that we humans cluster together throughout the country to protect them from extinction? 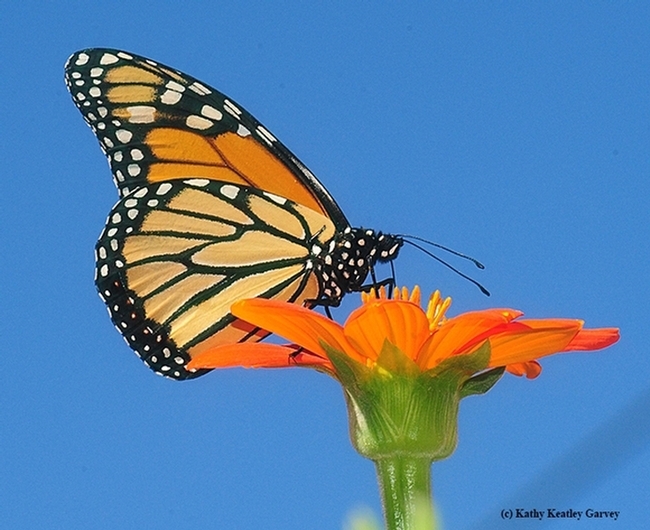 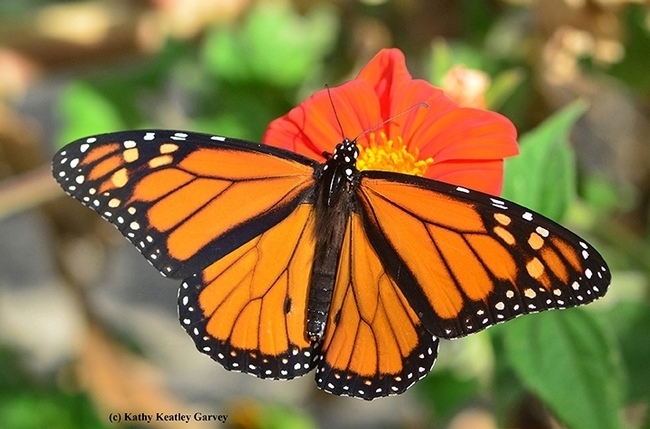 A male monarch spreads its wings as it nectars on Mexican sunflower, Tithonia rotundifolia. (Photo by Kathy Keatley Garvey) 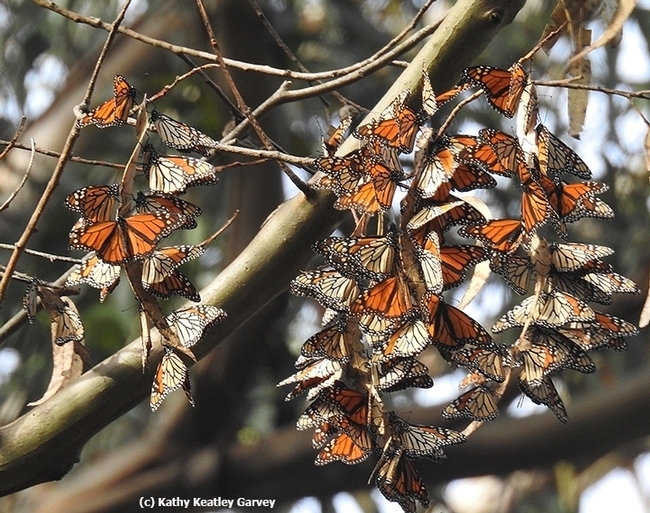