Bug Squad
sitenum=63
Happenings in the insect world
About Those Black Widow Spiders... Yes! It's among dozens of fact sheets (mostly insects but some arachnids and other non-insects) posted on the Bohart Museum website. All can be accessed and downloaded at no charge.

Lynn Kimsey, director of the Bohart Museum and a UC Davis professor of entomology, writes the fact sheets, including this one, titled "Widow Spiders."

"Widows are large, distinctive spiders in the genus Latrodectus," Kimsey writes. The Latrodectus mactans or black widow is found throughout the world in warmer regions, while the brown widow, L. geometricus, is found in warmer parts of the United States, including California.

You'll find widow spiders in and around homes, garages, barns and other human-made structures in California. "They build a tough, messy-looking three dimensional web in or behind objects in secluded and protected locations," Kimsey relates.

"During the summer months they may also commonly be found outside under shrubs, and other garden plants, or near porch lights," she says. "These spiders are excellent at controlling insects, particularly flies and crickets. They do not particularly like feeding on cockroaches, but will do so when other insects are unavailable."

What most folks seem to want to know about them are the bites. How painful and toxic are they?

"All spiders have painful and sometimes dangerous neurotoxic bites, but often give dry bites, with no venom," Kimsey points out. "In fact these are the only spiders in the United States with neurotoxic venom. The bites cause extreme physical discomfort and illness for several days to a week and can only be treated symptomatically. Common symptoms include pain in the vicinity of the bite, muscle aches, severe abdominal pain, vomiting, muscular cramping, sweating, fever and head- ache. The bite location itself may go unnoticed."

"There is usually no swelling at the site of the bite, where a small necrotic lesion may form, which heals slowly over a period of weeks or months. Black widow bites are rarely life threatening but may be dangerous for small children or individuals with chronic health problems. There have been no deaths from the bite of this spider for decades. Black widow bites can be dangerous for pets and can be fatal to small dogs or cats."

Kimsey advises that control is not necessary "unless a black widow is in an area frequented by people, particularly children, or by pets. It is important to remember that these are very shy spiders and never bite unless physically threatened."

Noted spider authority Jason Bond, the Evert and Marion Schlinger Endowed Chair in Insect Systematics, UC Davis Department of Entomology and Nematology and his lab usually present a program at the Bohart Museum on spiders at least once a year or engage with folks at the open houses.

The Bohart Museum of Entomology, located in Room 1124 of the Academic Surge Building on Crocker Lane, UC Davis campus, is the home of nearly 8 million insect specimens, plus a live "petting zoo" (Madagascar hissing cockroaches, walking sticks and tarantulas) and a gift shop. The Bohart is temporarily closed due to the COVID-19 pandemic but the online gift shop is open, where you can find insect-themed t-shirts, hoodies, jewelry, posters, books, pens, and stuffed animal toys, as well as insect-collecting equipment. 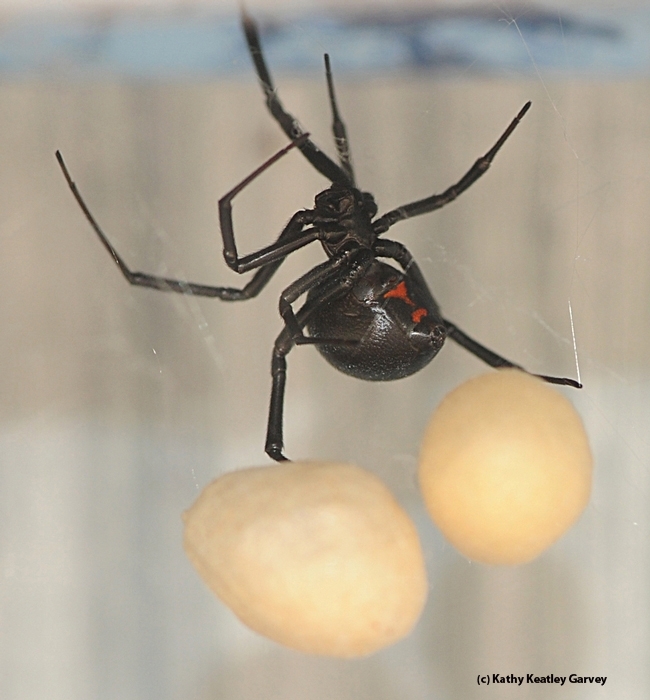 A black widow spider juggles two egg sacs that she deposited on the lip of a swimming pool in Vacaville, Calif. (Photo by Kathy Keatley Garvey)
Focus Area Tags: Environment, Natural Resources, Yard & Garden
Tags: black widow spider (7), Bohart Museum of Entomology (437), fact sheet (2), Lynn Kimsey (323), UC Davis Department of Entomology and Nematology (454)
Comments: 1
Comments:
by Lynn Royce
on January 8, 2021 at 5:32 AM
Such beautiful spiders. Thank you for sharing your informative write-up. I handled a lot of these spiders when I worked for the Insect identification clinic at Oregon State University. A lot were young ones that did not have the red markings developed yet. Even the adults that came in live were quite gentle.
Leave a Reply: