This image of a Hammock-reared roach and a UC Riverside zoo building appear on the "Bug" movie poster on the IMDB website. (Screen shot)
If you're meandering around the UC Riverside campus and see a cockroach, it might have a connection to UC Davis distinguished professor Bruce Hammock.

This is a story of what might have been that never was and never will be and it all has to do with Hammock's cockroaches.

Hammock, who holds a joint appointment with the UC Davis Department of Entomology and Nematology and the UC Davis Comprehensive Cancer Center, remembers the scenario well.

While on the UC Riverside faculty, he worked on two cultures of very large roaches. One was the wingless Madagascar hissing cockroach, Gromphadorhina portentosa, and the other, the South American cave cockroach, Blaberus giganteus with "lovely translucent wings."

When he published a paper on his research, the U.S. Department of Food and Agriculture discovered that these 20-year-old cultures had never been registered.

“So, I registered, certified and chugged on with the research,” recalled Hammock.  “Then one day both cultures vanished. I was frantic.”

The next day the chair of the department walked into his lab, gave him $10, and told him: “This is your share.”

The chair had sold the roaches that “no one was using” to a Hollywood movie company. “This  was the main project in my lab so I went to Hollywood and tried to get the insects back,” Hammock lamented. “No way.”

Hammock's prized roaches, perhaps destined for greatness in the scientific world of cockroach literature, instead starred as evil roaches in the 1975-released movie, “Bug,” an American horror film based on Thomas Page's novel, ”The Hephaestus Plague (1973).” A Madagascar hissing cockroach in the Bohart Museum of Entomology. (Photo by Kathy Keatley Garvey)
The film, according to Internet Movie Database (IMDB), became a science fiction classic, even though the directors used the two very different species interchangeably in the film.

The plot: A massive earthquake releases mutant cockroaches that create fire by rubbing together their cerci, a pair of small sensory appendages at the end of their abdomen that function somewhat like antennae. However, these mutant roaches die because they cannot survive in the low air pressure on the Earth's surface. Nonetheless, Professor James Parmiter (actor Bradford Dillman, 1930-2018), manages to keep one alive in a pressure chamber and breeds it with a modern cockroach, creating a breed of intelligent, flying, super-cockroaches. Chaos erupts in the small farming community.

Chaos also erupted on the movie set—and not just because some of the actors hated roaches.

“In a twist of fate,” Hammock said, “the movie company had rented the zoology building during the summer at UC Riverside for filming evil cockroaches from the center of the planet that got in people's hair and set them on fire.” In the process, the flames ignited a minor fire in the building.

An image of zoo building and a Hammock-reared roach appear on the IMDB poster.  “After they finished shooting, I heard that they released the roaches on campus,” Hammock said.

“I would never find them,” he lamented. "But my son (Tom Hammock) who now is in the film industry loved the story."

Madagascar hissing cockroaches, nicknamed "hissers," measure two to three inches long and are big in the pet trade. They are a popular attraction in the UC Davis Bohart Museum of Entomology's live “petting zoo.”

Hammock's roach-rearing days at UC Riverside included giving a hissing roach to his mother because “she wanted a pet so I gave her one.”

“She had for several years as a pet.  But she brought it back because she could not get her lady friends to babysit when she traveled.  It terrified our cat but finally settled into an uneasy relationship.”

Viewers' description of Bug ranged from “the best of killer bug films” and “a scream fest” to “something that really freaked me out.”  One reviewer, noting what happened to Professor Parmiter's wife, wrote “Bug, you light up my wife.”

Looking back, Hammock noted that "The science was actually a serious effort to work out the biosynthetic pathway of the hormone that regulates insect development, and then disrupt it for insect control. Sadly, I only published the first step before Hollywood turned the roaches into science fiction film history." 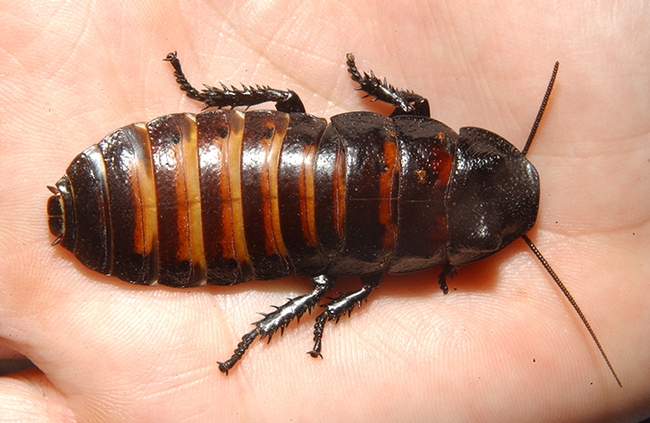 A Madagascar hissing cockroach from the Bohart Museum of Entomology, UC Davis. This is similar to what Bruce Hammock was rearing for a research project. (Photo by Kathy Keatley Garvey) 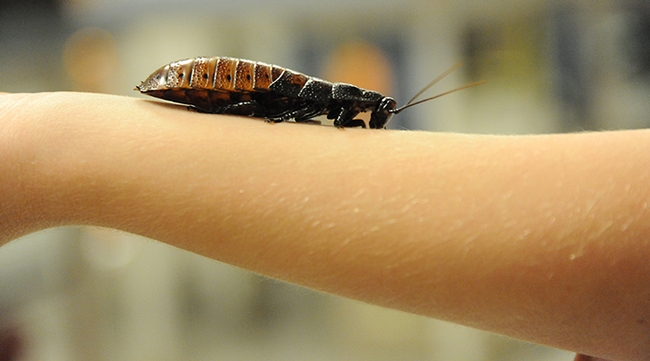 Close-up of a Madagascar hissing cockroach, aka "hisser," from the Bohart Museum of Entomology, UC Davis. (Photo by Kathy Keatley Garvey) 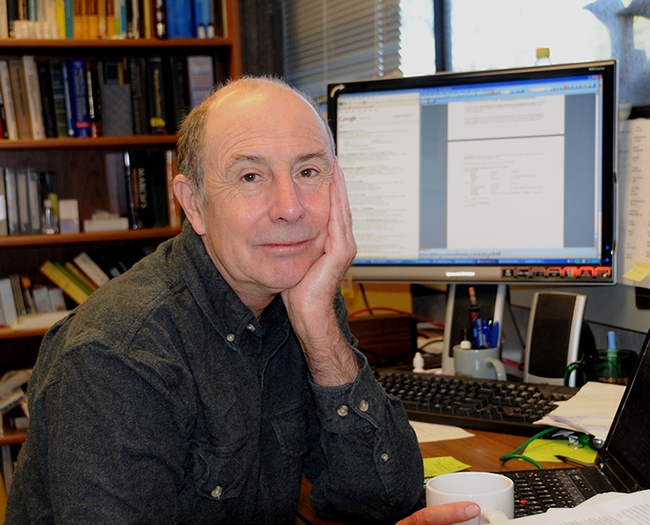