"All About Ants II" is posted on YouTube at https://youtu.be/d8eRNsD8dxo.

Ward, known for his expertise on ant systematics, offered an hour-long, introductory presentation on ants and answered scores of questions, drawing viewers from as far away as Virginia.  He illustrated his talk with ant images taken his former doctoral student Alex Wild (PhD from UC Davis in 2005), curator of entomology at the University of Texas, Austin, and a noted macro photographer (http://www.alexanderwild.com) and blogger, http://www.myrmecos.net.

Ants communicate largely by chemical (pheromones) and tactile means, Ward said. Their vision is "not particularly acute." He pointed out that that they lay a trail pheromones from the source of food back to the nest. They have alarm pheromones, causing other workers to act defensively. Chemicals also help ants distinguish their nest mates.

Some ants, like the Argentine ants, are pests. These invaders from South America "form super colonies, which means different colonies don't fight each other; they're all cooperating. And the other downside of Argentine ants is that they tend to eliminate native ants. So over the years I've lived in Davis, I have certainly noticed that native ants have declined as the Argentine ants have expanded. And they expand not just in, say, urban areas, but along certain natural habitats and one that they really like is the riparian habitat. So if you look along rivers and streams that are near urban areas, they're getting invaded by Argentine ants.  And when they do, most native ants just disappear.  This is a very tough aggressive ant and the mellow California ants can't handle an aggressive invader from South America. So they just disappear." 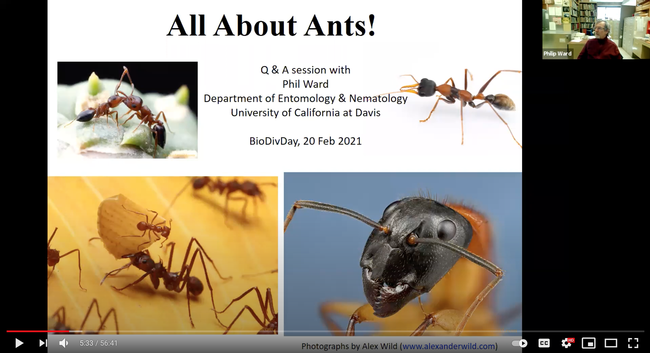