“A major taxonomic question surrounding western subterranean termites remains unsolved,” said Sutherland, the Urban IPM Advisor for the San Francisco Bay Area.  “Most termite species simultaneously swarm over a relatively short period during one season, facilitating genetic exchange during mating. Individuals thought to represent Reticulitermes hesperus, however, have been observed swarming during both autumn (usually on a sunny day after the first autumn rain event) and spring (sunny days when soil is moist) suggesting that there are at least two cryptic species considered within the western subterranean termite complex or that speciation is underway (individuals swarming at different times of the year cannot mate with one another).”

In the collaborative UC IPM, UC Riverside, and USDA Forest Service research project, “we seek to resolve this question once and for all by comparing DNA microsatellite data and cuticular hydrocarbon data from alates (winged termite swarmers) collected during these different seasons,” Sutherland said.

Residents of California, Oregon, Washington, Idaho, western Nevada, southern British Columbia, and northern Baja California can help by collecting at least 25 individuals of swarming Reticulitermes and freezing them in a hard-walled container, such as a pill bottle, film canister or a food storage plastic container. Contributors will receive a Common Cockroaches of California poster or another special gift. Contributing pest management professionals will receive a free training opportunity with ‘IPM' continuing education units for California's Structural Pest Control Board licenses.

Sutherland's program will fund the shipping of the specimens. He may be reached at amsutherland@ucanr.edu for further information, such as if the termite specimens qualify.

About Termites and Sutherland's Work
Termites, like cockroaches, are members of the order Blattodea and evolved some 120 million years ago. Structural infestations of subterranean termites are usually not visible, but the annual flights of winged termites (alates) are. This research will help pest control providers and residents understand the most likely swarming periods in their specific region, improving monitoring and control for these important structural pests.

Sutherland, who began researching termites in 2014, says the western subterranean termite, “is the most damaging wood destroying insect in northern California and most other parts of the Pacific Northwest, causing billions of dollars of damage to homes and other structures each year. Conventional treatments use soil drenches or injections of liquid termiticides to create protective barriers around wooden structures.”

One of his research projects seeks to evaluate an alternative management tactic for subterranean termites: bait station systems that use insect growth regulator insecticides to eliminate entire termite colonies. “Bait systems represent reduced environmental contamination as compared to liquid treatments, but adoption of their use in California and other Western states has been slow to progress,” he said, adding that he hopes his research will demonstrate the relative efficacy of baits and increase both demand for and provision of bait services.

Sutherland,  who holds advanced degrees in entomology and horticulture from UC Davis and the University of Florida—including a doctorate in entomology from UC Davis in 2009-- is a Board-Certified Entomologist (Entomological Society of America certification program). He focuses his research on developing new IPM strategies or adapting and implementing current IPM strategies, in cooperation with other researchers, pest control operators, pest management professionals, public agencies, schools, parks, public housing, and regulatory agencies involved with household, structural, and industrial IPM. 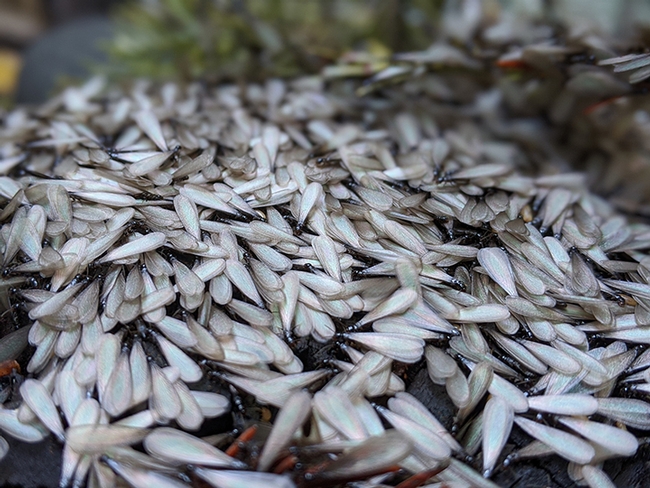 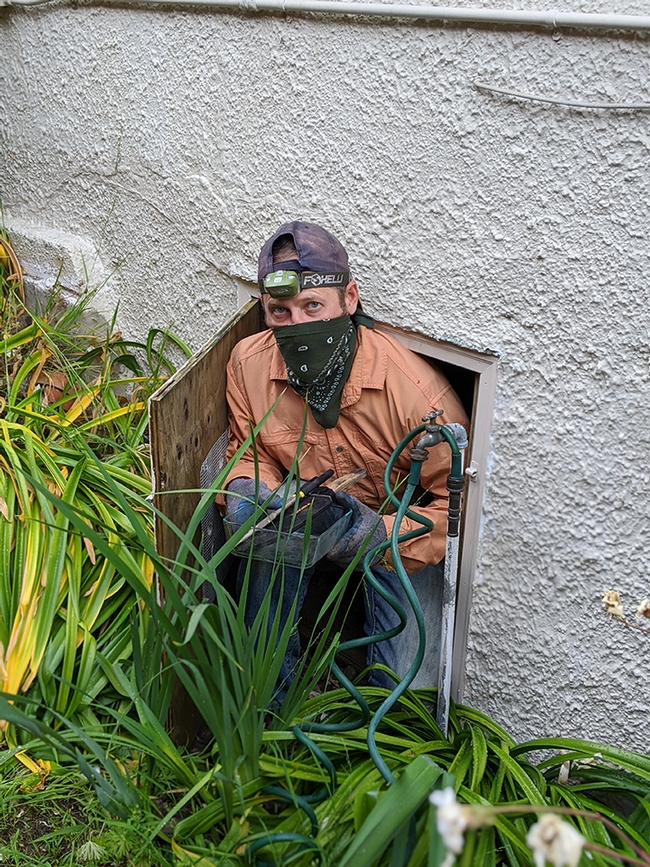 Andrew Sutherland emerges from a crawl space / subarea under a residential structure in Oakland during a subterranean termite monitoring and collection visit. (Photo by Casey Hubble) 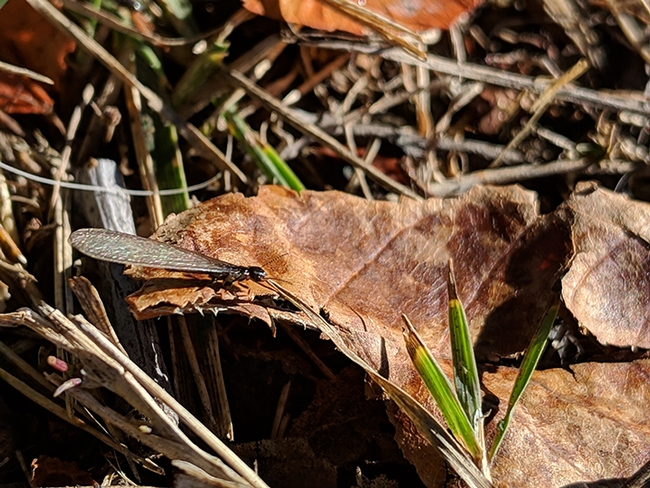