Zinfandel with fall frost damage to buds failed to push. This appeared severe in vineyards with low irrigation or dry-farmed and/or on rootstock 110R.
Hello Fodder Friends! This spring I've taken many farm calls from grape growers in Amador and Calaveras counties who are concerned about uneven shoot growth or, in severe cases, the complete lack of budbreak.  Some vineyards are experiencing no growth from the "count" bud (the bud pruned to for fruit) and alot of push from fruitless latent or tertiary buds further down.  Other vineyards have shoot growth, but it is very late, and coming out slow and stunted.

When cutting into the spurs, we see green tissue. But when some of the buds (those not pushing at all) are dissected, the primary bud appears brown-indicating dead tissue.  Many of the growers told me that they think this is due to fall frost-and they are right!! (although I admit I was slow to believe it until I looked at the data)!

A look at our fall temperatures and corroborating news from our friends in Lodi agree: unusual early November temperatures in some locations dipped into the low 20s.   This occurred at Amador stations and in Calaveras, but not in ElDorado county.

What confuses the situation at first glance is that not every vineyard is affected-and some are more severely affected-those that are dry farmed and certain varieties like Zinfandel- than others.  Furthermore when we cut into the cordons of some vines, trunk disease is evident.  Stress, from drought and often made worse by disease or root damage that further When cut into, the spurs appear green
impairs uptake of water, is at play here.

To help foothill growers understand what happened and what to do about it, I invited Kaan Kurtural, UCDavis Viticulture Specialist, and Akif Eskalen, UCDavis Plant Pathology Specialist, to a field day (the first in person meeting held since Covid!) at Don Potter's vineyard on May 26. UCDavis Viticulture Specialist Kaan Kurtural spoke about vine development and effects of arid and cold conditions
suffering the same symptoms.  Grape vines are different than other perennial crops in that there is no terminal bud that forms in grape and no Buds that show no growth are dissected and appear dead (brown); likely from last November's frost
complete hardening off in CA.-they keep growing until the first frost hits.  Unfortunately, there was still alot of moisture in shoots (due to coming off of an arid year with growers irrigating into a warm fall) this past fall when that occurred-in some cases killing the primary bud. Grapes have compound buds-the primary bud is the most fruitful-2 clusters/shoot, the secondary bud will produce 1 cluster/shoot, and the tertiary bud does not produce clusters. So, if the primary and/or secondary buds die, the buds left will be fruitless.

Kaan suggested the grower avoid fertilizer this year, since the vine's color is good, and need only sucker up to knee high to allow for herbicide applications to the berm.  Irrigation is critical this year (as always), and will help grow a canopy that will "feed" the structure of the vine.  And while crop is very light this year, the good news is that the vines will recover for next year.  Cutting the irrigation by early September (or after one post-harvest irrigation in a "normal" year) will help the vines get ready for cold temperatures.

Kaan clarified that 110R-a popular rootstock used in the foothills-is considered "drought tolerant" because it doesn't completely evacuate water from it's vessels-it limits root "leakiness" under drought. 3309 is considered the most cold tolerant rootstock; and scions on 3309 always come out last since the rootstock doesn't "wake up".  So, the rootstock can influence the scion, and the scion also will have an effect on when bud break occurs. Much to discuss again about rootstocks!-added attendee Tia Russell, Duarte nursery.  Indeed-we will visit this in the future...

Akif Eskalen then talked to the group about trunk diseases, since the symptoms of trunk disease, poor shoot growth, can be confused with cold, dry weather issues; and, when investigating the poor growth this year, many vines with trunk disease were found incidentally. The fungi responsible form spores in the winter UCDavis Plant Pathology Specialist Akif Eskalen talked about managing trunk diseases-which can impact vine stress.
that enter pruning wounds with rain. Akif noted that unlike powdery mildew, where if a grower doesn't control it one year he/she can go again the next season, canker moves into the plant and continues to grow over time-there is no control once the vine is infected.


Akif and his lab have worked on testing many pruning wound protectants that are sprayed onto the pruning wounds soon after the cut is made. One of those that looks promising is Bio-Tam, a formulation of beneficial fungi called Trichoderma.  The Bio-Tam can be applied using a sprayer-no hand painting of wounds!

All in all, another challenging year for grape growers.  Many are re-evaluating their operations to look for cost savings.  Thankfully, as Kaan said, "grapevines are very hard to kill", so if growers can ride out the season, the vines will continue to be there for us to nurture, harvest, and enjoy! Cutting into the spurs and cordon can reveal canker infection caused by fungi that infect pruning wounds and continue to grow in the vines. 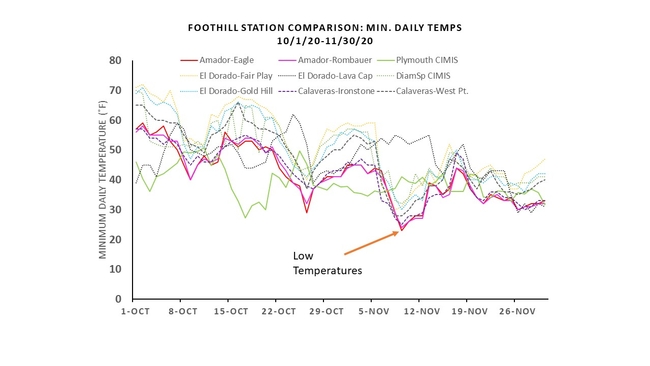