Have you ever seen an underwing, a moth in the family Erebidae?

Today one dropped out of a tree, landing on my feet in a Vacaville park. It just missed being a part of our National Moth Week celebration.

This one was both colorful and drab (see below). The species may be the sweetheart underwing, Catocala amatrix.

Lynn Kimsey, director of the Bohart Museum of Entomology and UC Davis distinguished professor of entomology, and entomologist Jeff Smith, curator of the Lepidoptera collection at the Bohart, noticed the tattered wings right away.

"I'd say it has a lot of mileage," Kimsey quipped.

It wasn't flying or fluttering, but dropping and hopping.

Larvae feed on leaves of poplar (Populus) and black willow (Salix nigra), according to BugGuide.net.
The family, says Wikipedia,  includes "the underwings (Catocala); litter moths (Herminiinae); tiger, lichen, and wasp moths (Arctiinae); tussock moths (Lymantriinae), including the arctic woolly bear moth (Gynaephora groenlandica);piercing moths (Calpinae and others); micronoctuoid moths (Micronoctuini); snout moths (Hypeninae); and zales, though many of these common names can also refer to moths outside the Erebidae (for example, crambid snout moths). Some of the erebid moths are called owlets."
Catocala amatrix can be found from Nova Scotia, south through Connecticut to Florida and west through Texas and Oklahoma to Arizona and north to Montana, Minnesota, and Ontario.

And sometimes you find it underfoot.

Interested in moths? Check out the Bohart Museum's home page to access videos about moths and butterflies by Smith and fellow Bohart associate Greg Kareofelas. Next year, if all goes well on the pandemic front, the Bohart may host a National Moth Night again. 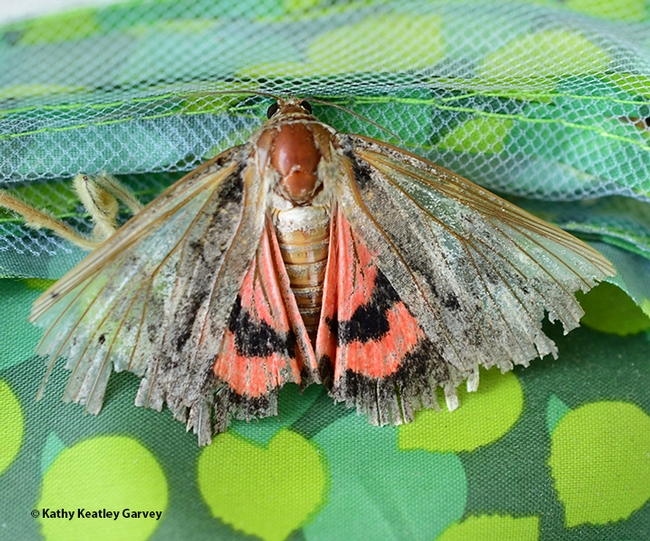