The California dogface butterfly, the state insect, is also known as "the flying pansy." This Bohart Museum of Entomology poster shows the male (top) and the female.
Meet "The Dogface Butterfly Guy."

Naturalist Greg Kareofelas, an associate of the UC Davis Bohart Museum of Entomology and an expert on the California state insect, the dogface butterfly, appeared several years ago on a segment of the PBS program, "Rob on the Road."

In a surprising case of recollection, someone at a Sacramento yard sale recognized him from the TV show and said "The Dogface Butterfly Guy!"

"We had a lot of fun doing that segment," Kareofelas recalled.

The California dogface butterfly, Zerene eurydice, is found only in California. It thrives in the 40-acre Shutamul Bear River Preserve near Auburn, Placer County.  The  preserve, part of the Placer Land Trust, is closed to the public except for specially arranged tours. Entomologist Fran Keller, a UC Davis doctoral alumnus who is now a professor at Folsom Lake College, authored the children's book, "The Story of the Dogface Butterfly." (Photo by Kathy Keatley Garvey)
Kareofelas, a volunteer docent for the Placer Land Trust's dogface butterfly tours, helped guide the tour that included Rob Stewart of "Rob on the Road" and UC Master Gardeners. The California dogface butterfly thrives at the Shutamul Bear River Preserve near Auburn, Placer County.
California legislators adopted it as the official state insect on July 28, 1972. But as early as 1929, entomologists had already singled it out as their choice for state insect. Their suggestion appears in the California Blue Book, published by the State Legislature in 1929. (Read more on how the butterfly became the state insect under the Ronald Reagan administration.)

We wrote about Greg Kareofelas and the "Rob on the Road" TV program on Bug Squad in 2017.

We also mentioned the 35-page children's book, The Story of the Dogface Butterfly, the work of entomologist and author Fran Keller, with photographs by Kareofelas and Keller, and illustrations by former UC Davis student Laine Bauer. The trio visited the Auburn site for their research, and Kareofelas also reared a dogface butterfly at his home in Davis and photographed the life cycle.  Keller, now a Folsom Lake College professor, holds a doctorate in entomology from UC Davis. She studied with major professor Lynn Kimsey, director of the Bohart and UC Davis distinguished professor of entomology.

Kareofelas and Keller also teamed to create a dogface butterfly poster of the male and female.  Both the book and the poster are available online from the the Bohart Museum of Entomology gift shop. The facility is closed to the public due to COVID-19 pandemic precautions.

Why does the butterfly thrive in Auburn? Because its larval host plant--false indigo, Amorpha californica--is there. The plant is difficult to grow outside this habitat, according to Placer Land Trust manager Justin Wages. Perhaps, he says, it's the unique geography and soil near the Bear River.

Think you've never seen the California state insect? Chances are, you have. A tiny image appears on all California driver's licenses and it's also a first-class stamp. 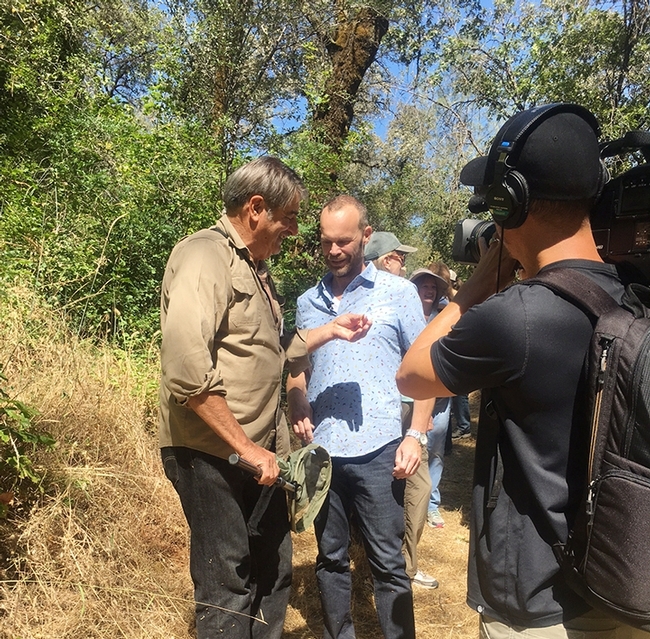