Bug Squad
sitenum=63
Happenings in the insect world
Would You Eat a Chocolate-Covered Cicada? Bohart Museum student lab assistant Amberly Hackmann said of the cicadas: "It's a good snack for when I didn't bring enough food to work." (Photo by Kathy Keatley Garvey)
Would you eat a chocolate-covered cicada?

Entomophagy is no problem for scientists at the Bohart Museum of Entomology, University of California, Davis. They know where the office snacks are kept.

Chocolate, did someone say chocolate? Ooh, chocolate! Let me at ‘em!

During a break, Bohart scientists recently sampled/snacked on the delicacy. The center of attention: chocolate-covered cicadas. (Photo by Kathy Keatley Garvey)
So, let's eat! And then let's talk!

Dyer: "They're an interesting snack, for sure. But I'm not a big fan of them, honestly."

Bright: "I like them, maybe not my go-to chocolate treat, but not bad!"

Hackmann: "It was a fun and tasty chocolate!"

Kimsey: "Tasted like chocolate-covered paper." (The jars had previously been opened)

Dyer: "I mostly tasted the chocolate and flavorings since cicadas have quite hollow bodies, but I would say they have a light nutty flavor. Much more pleasant than crickets, which have a strange aftertaste in my experience."

Bright: "The spices in the chocolate were really nice and then the cicada itself just added a fun crunch but not much flavor, similar to a malt ball!"

Arnold: "Tasted like stale chocolate, the cicada only contributed by getting stuck in my teeth."

Would you eat them again? Bohart Museum lab assistant Brennen Dyer: "They're an interesting snack, for sure. But I'm not a big fan of them, honestly." (Photo by Kathy Keatley Garvey)
Kimsey: "Only if need be!"

Dyer: "I wouldn't eat them again, to be honest. I believe the wings were still attached, which don't have a nice texture. I'd be happy to try cicadas again but in another form. Perhaps a savory meal instead, like stir fry or fried rice."

Bright: "Definitely! That was actually my third one!"

Arnold: "If they were fresher, why not?"

Hackmann: "Yes, it's a good snack for when I didn't bring enough food to work. "

Have you eaten (or enjoyed) other insects?

Kimsey: "Mealworms are good, crickets not so much."

Bright: "I've eaten crickets, mealworms, and termites that tasted like cilantro (in Belize)! I've also accidentally eaten a Hemiptera that was hiding on a blackberry, which was not so pleasant."

Arnold: "I enjoy mealworms with butter and salt (tastes just like popcorn)"

Opinions differed at the Bohart tasting, but patrons at a chocolate shop in Bethesda, Md., loved them  during the Brood X Periodical Circada explosion.

A Reuters news story related that chocolate-covered cicadas were literally flying off the shelves last June at a chocolate shop in Bethesda, Md. Owner Sarah Dwyer of Chouquette Chocolates pointed out a 10-day backlog of orders.

She froze, boiled, cleaned, crisped (in air fryer) and then fried them. She sprinkled some with cinnamon and others with Old Bay Spice, and then dipped them in chocolate.

“I did go to pastry school in Paris to learn my dipping technique," Dwyer told Reuters. "I'm pretty sure no one thought I would be using it on cicadas."

Bohart Open House on Entomophagy in 2019

The Bohart Museum, currently closed to the public due to COVID-19 pandemic precautions,  hosted an open house in  September of 2019 to give the public a taste of entomophagy. The theme: "Gobble, Gobble, Munch, Munch, Crunch: Entomophagy." Visitors ate crickets, earthworms and mealworms and received a button proclaiming "I Ate a Bug at the Bohart."

The Bohart Museum, located in Room 1124 of the Academic Surge Building on Crocker Lane, houses a global collection of nearly eight million specimens. It is home to the seventh largest insect collection in North America, and the California Insect Survey, a storehouse of the insect biodiversity. It also maintains a live "petting zoo," comprised of Madagascar hissing cockroaches, stick insects and tarantulas; a year-around gift shop (now online),  stocked with T-shirts, sweatshirts, books, jewelry, posters, insect-collecting equipment and insect-themed candy.

More information on the Bohart Museum is available on the website at http://bohart.ucdavis.edu. 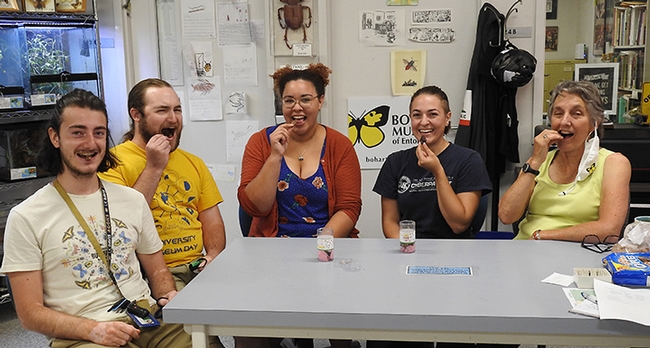 Sampling a chocolate-covered cicada snack are (from left) Maxwell Arnold, Brennen Dyer, Iris Bright, Amberly Hackmann, and Lynn Kimsey, director of the Bohart Museum of Entomology and a UC Davis distinguished professor of entomology. (Photo by Kathy Keatley Garvey)
Focus Area Tags: Environment, Food, Innovation, Natural Resources
Tags: Bohart Museum of Entomology (460), chocolate-covered cicadas (1), Lynn Kimsey (336)
Comments: 2
Comments:
by mark bill
on September 13, 2021 at 2:21 AM
I've been eating them breaded and deep fried with cayenne pepper, garlic powder, salt, cumin and onion powder after marinating them in Worchester sauce. They taste great.
by Rachael F Long
on September 13, 2021 at 11:04 AM
This was a very fun read; thank you for sharing!
Leave a Reply: