Tabatha Yang, the Bohart Museum's education and outreach coordinator, shows specimens to youths at a Solano County Ag Day in Vallejo. The UC Davis CrowdFund resulted in $6000 earmarked for UC Davis students to make traveling display cases. (Photo by Kathy Keatley Garvey)
If the folks at the Bohart Museum of Entomology at UC Davis are smiling even more than usual, that's because their UC Davis CrowdFund project resulted in 120 percent funded! In a month-long campaign, they were seeking $5000 by Oct. 31 and donors generously provided them with a total of $6000.

The funds will be used for the student educational projects: creating traveling specimen display boxes to be shown in school classrooms, fairs, festivals, museums, hospitals, libraries, special events and the like, such as 4-H programs.

As they say on their website: "The Bohart Museum of Entomology is a research collection and public museum dedicated to understanding, documenting and communicating terrestrial arthropod diversity. In our 75th year, the Bohart has maintained a robust outreach program that typically connects with over 10,000 people each year. Portable educational boxes have been a great way for us to share the museum experience with others. Housed in the same specimen boxes that we use for the research collection, these displays travel all over Northern California to festivals, events, museums, hospitals and classrooms. UC Davis students, staff, teachers and scout leaders routinely borrow these materials to enrich their programs."

The Bohart Museum, currently closed to the public due to COVID-19 precautions, is located in Room 1124 of the Academic Surge Building on Crocker Lane, UC Davis campus. In addition to its insect collection, the seventh largest in North America, it houses a live “petting zoo,” comprised of Madagascar hissing cockroaches, stick insects and tarantulas, and a gift shop (now online), stocked with insect-themed t-shirts, hoodies, jewelry, books, posters and other items. Further information is on the website at https://bohart.ucdavis.edu. A Bohart Museum insect-specimen display case. (Photo by Kathy Keatley Garvey)
The donors (those who donated anonymously are not listed) in the UC Davis CrowdFund drive: 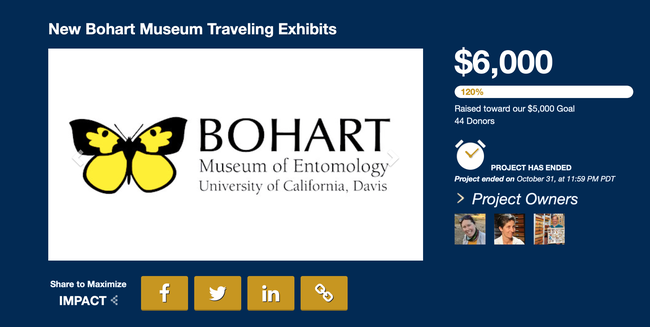 The Bohart Museum of Entomology surpassed its goal of $5000 and gratefully received $6000. (Screen shot) 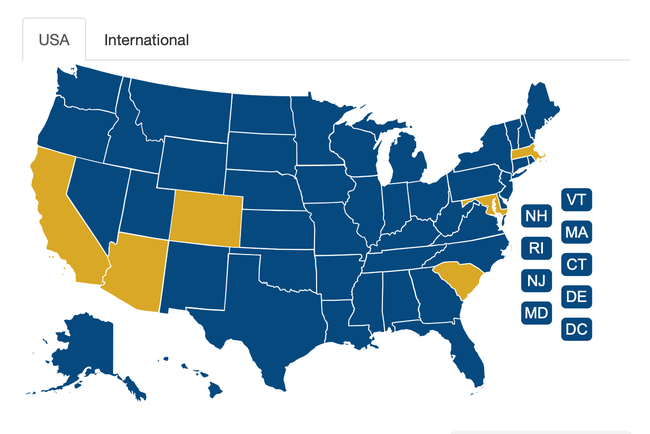