Close-up of Odell's "type writer," inherited by UC Davis distinguished professor Bruce Hammock. His grandfather purchased it at the beginning of his law career. (Photo by Kathy Keatley Garvey)
If the University of California, Davis, were to lose electrical power, distinguished professor Bruce Hammock's humorous “back-up plan” at his Briggs Hall office would make antique collectors drool—and his administrative staff cringe over just the thought of preparing a 986-page grant application on his “back-up typewriter.”

“This model is one of our nation's oldest linear index typewriters,” said Hammock, who holds a joint appointment with the UC Davis Department of Entomology and Nematology and the UC Davis Comprehensive Center. “It has no keyboard. It has a rail-type system with the characters spread out in a straight line--and not in alphabetical order, either. This is confusing compared to the modern-day QWERTY keyboard design, yet this instrument saved my grandfather's career.”

Not only did it save Judge Hammock's career, but Judge Hammock and his “type writer” inspired the development of Professor Hammock's 42-year career at UC Davis, which includes founding director of the UC Davis Superfund Research Program (SRP), funded by the National Institute of Environmental Health Sciences (NIEHS) since 1987. To date, the Hammock-directed program has brought in more than $90 million in grants to the UC Davis campus. UC Davis distinguished professor Bruce Hammock
Professor Hammock inherited the typewriter in 1982 from his mother, Grace. “Yes, I've used it,” he said, “but only once. Yes, it worked, but I won't use it ever again. It is too old and fragile. And to use it, you need a strong arm to hit the keys, especially if you have multiple carbons. And you can't see what you're typing. A metal bar blocks your view.”

Rival newspapers figure into the history of the Hammock-owned typewriter. “It all began when The Arkansas Democrat ran an article showing a 70-year-old typewriter,” the UC Davis professor related.  “In response to this, The Arkansas Gazette, then the oldest paper west of the Mississippi—it was established in 1819--published an article on an even older Odell typewriter—the one owned by my grandfather.”

Strong Arm. “I have that newspaper clipping from 1915 that shows my Aunt Maude Hammock using the typewriter in my grandfather's law office,” Hammock said. “She was secretary to her dad—my grandfather--and had an exceptionally strong arm to make it work – rather like Popeye the Sailor. In the photo, my grandfather is seated at his desk.” The newspapers merged in 1991 to become The Arkansas Democrat-Gazette.

“The oral history of the typewriter is that William Thomas Hammock was living in the country town of Quitman, Ark., in 1893 and had just passed the bar," the UC Davis professor related. "Being a new attorney with no business and lots of spare time, he jumped at a $150 contract to make a copy of the county's handwritten laws and regulations.  Not being an experienced lawyer, he failed to read the fine print.  The county wanted not one, but 10 handwritten copies.  This was impossible on his budget.”

“Then he heard about something called a ‘type writer.' He boarded a train to Chicago, where the Odell type writer company had just relocated from Wisconsin, checked out the machine, and bought it for about $15.  This invention permitted him to use carbons and he only needed to type the documents twice, with multiple carbons.”

Husky as a Blacksmith. "The number of carbon copies that can be made with the Odell is limited only by the strength of the operator's right arm," according to The Arkansas Gazette article.  "Mr. Hammock took setting up exercises each morning and made 10 copies at a time. After a couple of months, he was as husky as a blacksmith and had earned $150.  Mr. Hammock became quite proficient in handling the machine.  He could pound out a line of legal phraseology much quicker than his forebears could chisel out a love message on stone or parchment, though the physical effort was about the same."

A brass plate shows the name of the inventor, the year of the patent, and where it was manufactured. (Photo by Kathy Keatley Garvey)
"The old machine looks something like a cross between a coffee grinder and an airplane model," The Gazette article continued. "The type bar, bearing two cases of copper type moves in a groove across the top of the machine.  The roller, which holds the paper, is underneath and moves north and south while the type bar moves east and west, so to speak.  An indicator on the type bar fits into a series of lettered notches on another bar.  All you have to do is find the proper notch and bear down.”

Valued at $2000. Today the $15 typewriter is valued at more than $2000. Brass-plated with its inventor's name and cradled in its original wooden case in a corner of the Hammock office, the machine draws such comments from visitors as “My, it is beautiful!” and “Is that REALLY a typewriter?”

“Yes,” he tells them, and then explains, to their amazement, how it works: “You slide the bar along the rail until the pointer meets the letter you want. Then you press down a lever very hard, depressing the entire rail.”

The UC Davis professor marvels at how far office machine technology has advanced: from the first primitive typographical contraption (1713) to the first linear index typewriter (1881) to the modern-day dual-screened computer that occupies his desk. The inscription on the back of the 1915 photograph, a photo that depicts Judge Hammock and his daughter, Maude.
Hammock, who joined the UC Davis faculty in 1980 from UC Riverside, remembers typing grants on typewriters—pounding the keys, sliding the carriage return, and hearing the familiar ding.  “For most work, I had an upright Remington at that time.  The transition to computers started with magnetic card machines when I was at UC Riverside.  When I joined the UC Davis faculty, I bought a PDP 1123 computer with Ted Wilson, a research scientist in the department, and we converted the text editor into a word processor and allowed people in the department to join our self-designed network for free.  In some ways, it worked better than the current word processors.”

“Just as this new technology of the Odell type writer saved my grandad's career as a lawyer, this adapted word processor on the rather ‘Dr. Who-ish' PDP computer changed my career at UC Davis when we received that NIEHS grant in 1987 to establish the UC Davis Superfund Research Program. It's now the longest running Superfund Program in the country.”

What SRP Does. The UC Davis SRP conducts and translates research on hazardous substances in the environment and their impact on human health. It also cross-trains scientists in multiple physical and biological sciences to address the complexity of the toxic waste issue in the nation.   Its goals: to acquire a better understanding of the human and ecological risks of hazardous substances; and to advance the development of new technologies for the cleanup of contaminated sites.

The Hammock-directed program encompasses five projects and six cores, spread throughout most of the colleges, and involving more than 12 departments, eight labs and 35 personnel, as well as several dozen undergraduate and graduate students and collaborators. In addition to the grant funding, the SRP receives supplemental funding for multiple training, equity and outreach projects. The 2021-22 budget? A little over $2.6 million.

“We have addressed multiple problems in California ranging from the clean-up of the Mare Island Naval Shipyard through the MTBE (methyl tertiary-butyl ether)  groundwater crisis to now helping the Yurok Nation in Northern California deal with environmental contamination,” Hammock said. “To compete for centers, program projects and training grants, we need not only good science but also the administrative infrastructure to put together proposals.”

The NIEHS website points out that the cornerstone of SRP “is the university-based, multiproject center grant program. Since 1987, SRP has funded research at 35 universities across the United States, and currently funds 249 research and engagement projects at 23 universities with 142 collaborations at 120 institutions.”

Recalling his initial application for the federal grant, Hammock commented that “the opportunity for a large interdisciplinary grant with a very short time line arose from NIEHS. Applicants had to put together engineers, soil chemists, toxicologists, medical doctors and veterinarians in an integrated project on a short time line.”

Never Could Have Pulled This Off. “We never could have pulled this off without the technology of a word processor,” Hammock said, adding, “or without a wonderful department staff. Having the administrative staff, in this case Dee Dee Kitterman and the word processing technology of the PDP, made the difference. The renewal that went in this year was 986 pages!  It makes you appreciate the collaborative nature of the science at Davis, the quality of the science, and particularly the administrative structure that supports it. We would not compete without the modern-day equivalents of the Odell Type Writer and the professionals who make our equipment sing.”

“Administrative staff are crucial,” Hammock said. “They should be appreciated all year around, not just on a single day (Administrative Professionals Day is April 27). And to think that in the past, our administrative professionals—then known as secretaries faced these challenges— with such formidable equipment as Odell's Type Writer—and won.” 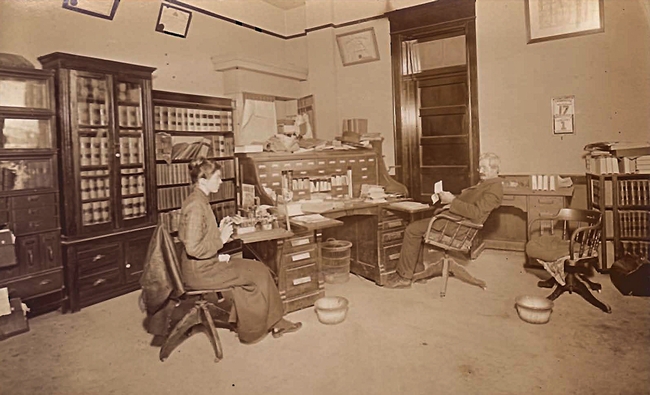 In this 1915 image, Judge William Thomas Hammock of Little Rock, Ark., sits at his desk while his daughter, Maude Hammock, works the "Odell's Type Writer." (Photo courtesy of Bruce Hammock) 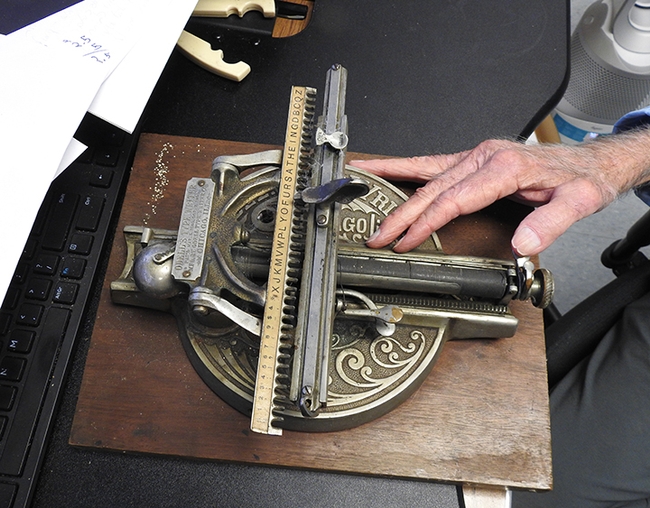 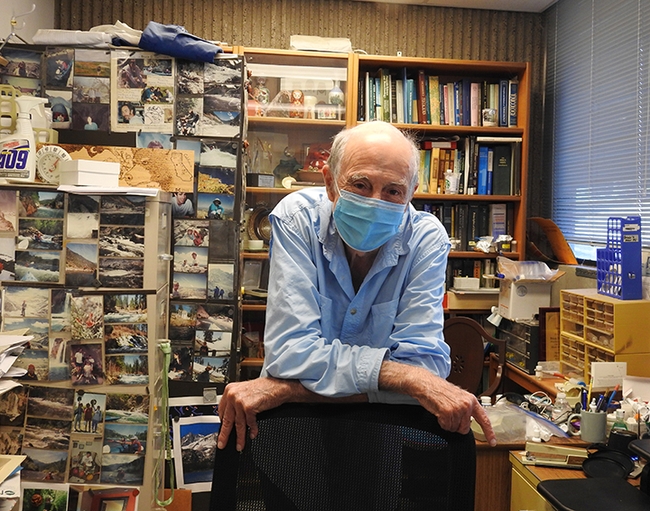