Asher Schneider found this cabbage white butterfly in Davis on Jan. 23.
UC Davis distinguished professor Art Shapiro of the Department of Evolution and Ecology didn't sponsor his annual "Beer-for-a-Butterfly Contest" this year, but if he had, an eight-year-old Davis boy would have been the runner-up.

Asher, the son of Rachel White and Ben Crago-Schneider,  spotted the butterfly on salvia (sage). "Sadly this guy looked like he didn't have much time left," White said. "He was just kind of flopping around on the sage."

The family remembered reading about the annual contest in The Davis Enterprise, and emailed a photo to Shapiro.

Shapiro, clearly delighted in the youth's participation in what would have been the 50th annual contest (canceled the last two years due to the COVID pandemic precautions) promptly named him "runner-up."

"Pop goes the Pieris!" Shapiro emailed to his colleagues and friends.

Jan. 19 was the day that his colleague-collaborator Matt Forister, the Trevor McMinn Endowed Professor in Biology, Foundation Professor, at the University of Nevada, calculated it would be sighted. Forister, who received his doctorate in ecology (2004) from UC Davis, studying with Shapiro, creates "The First Flight Date" graphs.  "And.... as if we had coordinated efforts (which we didn't), here's the graph!" Forister wrote in an email. "Art, you nailed it right on the regression line this time, you deserve an extra beer."

The contest involves collecting the first cabbage white butterfly of the year in the three-county area of Yolo, Sacramento and Solano. The traditional rules: Catch a live cabbage white butterfly in the wild in one of those three counties, deliver it live to Shapiro's department in Storer Hall, UC Davis (with the full data, exact time, date and location of the capture) and if it's the first of the year, the winner receives a pitcher of beer or its equivalent.

Since 1972, the first flight of the cabbage white has varied from Jan. 1 to Feb. 22, averaging about Jan. 20. Shapiro says with climate warming, the species is now emerging a week or so earlier on average than it did 30 years ago here.

P. rapae inhabits vacant lots, fields and gardens where its host plants, weedy mustards, grow. The male is white. The female is often slightly buffy; the "underside of the hindwing and apex of the forewing may be distinctly yellow and normally have a gray cast,” Shapiro says. “The black dots and apical spot on the upperside tend to be faint or even to disappear really early in the season.”

Shapiro has monitored butterfly population trends on transects across central California since 1972 and maintains a research website at http://butterfly.ucdavis.edu/   His 10 sites stretch from the Sacramento River Delta through the Sacramento Valley and Sierra Nevada mountains to the high desert of the Western Great Basin. The largest and oldest database in North America, it was recently cited by British conservation biologist Chris Thomas in a worldwide study of insect biomass.

In its larval form, the cabbage white butterfly, known as "the imported cabbageworm," is a pest of cole crops. "Cabbageworm larvae chew large, irregular holes in leaves, bore into heads, and drop greenish brown fecal pellets that may contaminate the marketed product," according to the UC Statewide Integrated Pest Management Program. "Seedlings may be damaged, but most losses are due to damage to marketed parts of the plant." 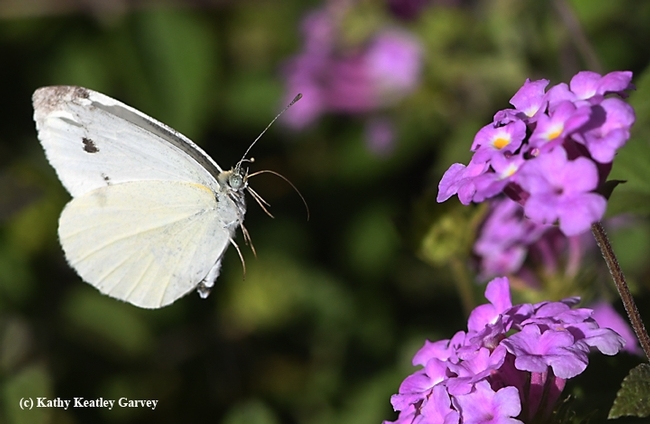