Entomology & Nematology News
sitenum=270
UC News about Entomology and Nematology.
Ant Research: The Story Behind the Lasius Work by Three Alumni of the Phil Ward Lab
Published on: January 27, 2022 Abstract of the ant research paper by Brendon Boudinot, Matthew Prebus and Marek Borowiec.
Myrmecologists Brendon Boudinot, Marek Borowiec and Matthew Prebus, all alumni of the Phil Ward laboratory, UC Davis Department of Entomology and Nematology, are drawing rave reviews for their collaborative research,   "Phylogeny, Evolution, and Classification of the Ant Genus Lasius, the Tribe Lasiini and the Subfamily Formicinae (Hymenoptera: Formicidae)," published in in the journal Systemic Entomology.

"Within the Formicidae, the higher classification of nearly all subfamilies has been recently revised given the findings of molecular phylogenetics," the co-authors wrote in their abstract. "Here, we integrate morphology and molecular data to holistically address the evolution, classification, and identification of the ant genus Lasius, its tribe Lasiini, and their subfamily Formicinae. We find that the crown Lasiini originated around the end of the Cretaceous on the Eurasian continent and is divisible into four morphologically distinct clades: Cladomyrma, the Lasius genus group, the Prenolepis genus group, and a previously undetected lineage we name Metalasius gen.nov., with one extant species M. myrmidon comb. nov. and one fossil species, †M. pumilus comb. nov. "  (See more.) Brendon Boudinot, co-author
Boudinot says "this work was eight years in the making—trials and tribulations were the order of the decade." The study began with a challenge. "Phil told us of a population of highly unusual species of Lasius from Gates Canyon Canyon near Vacaville, L. atopus, and wondered if we would be able to find a colony. The three of us drove to Gates Canyon on March 22, 2014 and spent several hours flipping rocks and digging in this steep-sided and poison-oak-filled ravine until we found one! We proceeded to hack our way through the poison oak roots to collect as many specimens as possible." "In my opinion, one of the really cool aspects of this study is the method of evaluating the placement of fossil taxa in the phylogeny of the subfamily Formicinae," Prebus shared. "Because DNA data aren't available for fossil taxa, the assignment of fossils to ranks higher than species relies on the interpretation of their morphology, and historically that interpretation has relied heavily on expert opinion--and all of the biases that said experts hold. By collecting morphological data from all extant and fossil taxa in our dataset, we were able to unite the DNA data--from extant taxa--and the morphological data--from extant and fossil species--and formalize fossil placement, and evaluate the uncertainty of those placements, in model-based analyses. I think that this study joins a growing trend in systematics in general, in which we are increasingly moving away from expert opinion toward approaches that are testable and repeatable." 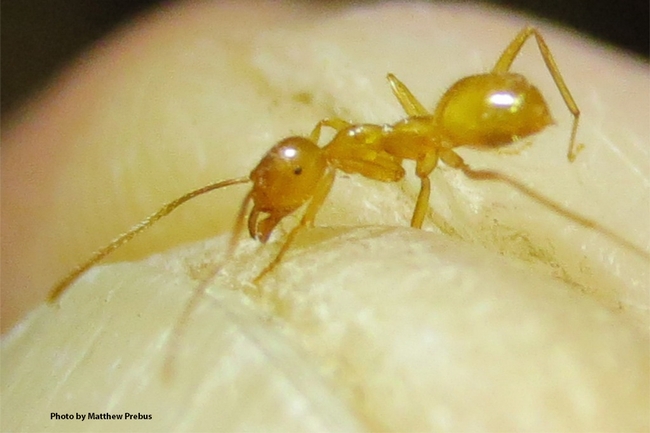 This is the species (Lasius nr. atopus) that inspired the initial stages of the project. (Photo by Matthew Prebus) 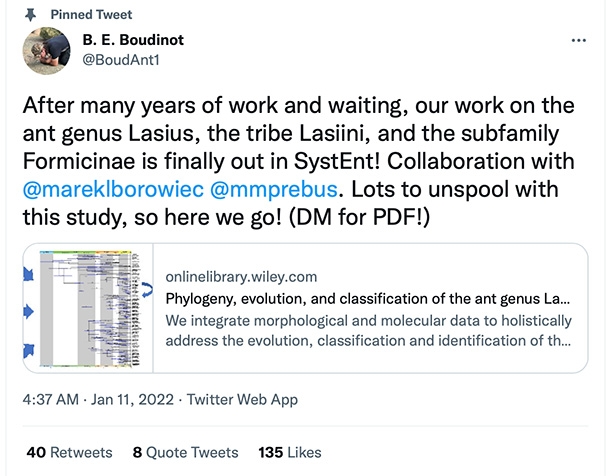