Hammock, who now holds a joint appointment with the Department of Entomology and Nematology and the UC Davis Comprehensive Cancer Center, knows too well what fire can do to victims.

So do other members of the Hammock lab and the Department of Surgery, University of Cincinnati College of Medicine (UC CoM).

They've just published research in the Proceedings of the Natural Academy of Sciences detailing their discovery of a key regulatory mechanism in inflammation that may lead to resolving inflammation in burn patients, as well as sepsis, cancer and COVID patients.

Basically, they discovered a pathway that regulates the immune response after infection or injury, such as burns. Dysregulation of this pathway could differentiate those who are at risk of fatal sepsis or help identify targets to resolve this unregulated inflammation.

“We are very excited about the findings in this paper and the far-reaching impacts it could have on understanding a key regulatory step in the immune response,” said co-lead author and researcher Cindy McReynolds of the Hammock lab and director of research at EicOsis, a Davis-based company founded by Hammock. Hammock, the corresponding author of the publication, has been involved in enzyme research for more than 50 years. “This dysregulation has fatal consequences in serious diseases such as COVID, cancer, sepsis, burn, where fatality rates can be as high as 40 percent in severe cases,” she said. “An understanding of these pathways can help identify patients at risk of developing serious disease or identify new therapeutic targets for treatment.” Co-lead author and researcher Dr. Christian Bergmann
“The immunological disbalance we see in many cases of severe burn injury, trauma and sepsis pose a huge clinical challenge as we lack the understanding of how to diagnose and treat it,” said co-lead author Dr. Christian Bergmann, formerly with UC CoM's Department of Surgery and now headquartered in Germany with the University of Ulm's Department of Trauma Surgery, Hand, Plastic and Reconstructive Surgery. “With this work, we reveal an important mechanism how immune cells are functionally disabled by sEH-derived metabolites of linoleic acid.”

It's a complicated research project, but a crucial one to help humanity.

And that's what EicOsis is all about, as well.  Hammock founded EicOsis in December 2011 to advance novel, safe and effective oral treatments for patients suffering from pain and inflammation. The LLC is developing a new class of oral non-narcotic analgesics based on inhibition of the soluble epoxide hydrolase enzyme. Human clinical trials are underway to test the drug candidate, EC5026, a first-in-class, small molecule that potently inhibits sEH. The sEH inhibitors have already shown to be effective for inflammatory and neuropathic pain in animals, with no apparent adverse or addictive reactions. 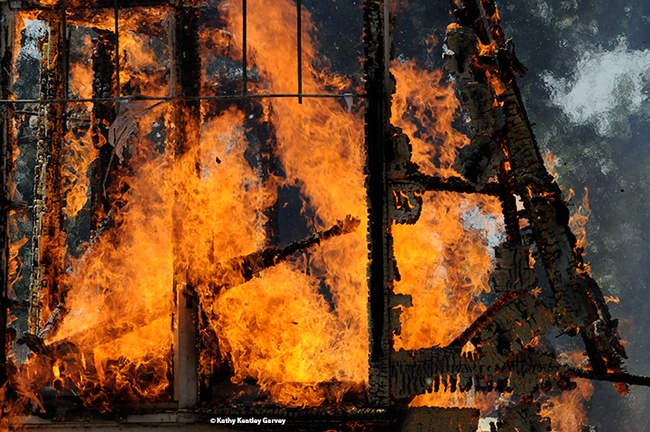 Every year, some 10,000 burn victims in the United States undergo an acute inflammatory reaction and die of burn-related infections, according to the Centers for Disease Control and Prevention. This image is of a UC Davis Fire Department control burn of an abandoned home-turned lab. It was last used as an avian lab research facility. (Photo by Kathy Keatley Garvey)
Focus Area Tags: Health, Innovation
Tags: Bruce Hammock (66), Cindy McReynolds (5), Dr. Christian Bergmann (1), UC Davis Department of Entomology and Nematology (629), University of Cincinnati College of Medicine (1)
Comments: 0
No Comments Posted.
Leave a Reply: