It's early morning, Aug. 20. A lady beetle is snacking on aphids on our native milkweed plant (where the monarchs are supposed to be, but aren't!). And then, apparently satiated, LB climbs a twig to the top of her Mt. Everest, looks around, unfolds her wings, and takes off.

"The ladybug is a tiny insect with hind wings four times its size," wrote Joanna Klein in her article,
Ladybugs Pack Wings and Engineering Secrets in Tidy Origami Packages, in the May 18, 2017 edition of The New York Times. "Like an origami master, it folds them up into a neat package, tucking them away within a slender sliver of space between its abdomen and the usually polka-dotted, harder wings that protect it.

"When it is time to take off, it deploys its flying apparatus from beneath its colorful shell-like top wings, called the elytra, in only a tenth of a second. And when it lands, it folds it back in just two. Switching between flying and crawling many times in a day, the ladybug travels vast distances."

Klein called attention to a study published in the May 17, 2017 edition of the Proceedings of the National Academy of Sciences.  The authors, she said, detailed "just how the ladybug manages to cram these rigid structures into tiny spaces is a valuable lesson for engineers designing deployable structures like umbrellas and satellites."

It's the work of Kazuya Saito of the Institute of Industrial Science, University of Tokyo, Japan, and his colleagues, Shuhei Nomura, Shuhei Yamamoto, Ryuma Niiyama and Yoji Okabe.

The title?  "Investigation of Hindwing Folding in Ladybird Beetles by Artificial Elytron Transplantation and Microcomputed Tomography."

The significance? "Hindwings in ladybird beetles successfully achieve compatibility between the deformability (instability) required for wing folding and strength property (stability) required for flying. This study demonstrates how ladybird beetles address these two conflicting requirements by an unprecedented technique using artificial wings. Our results, which clarify the detailed wing-folding process and reveal the supporting structures, provide indispensable initial knowledge for revealing this naturally evolved optimization system. Investigating the characteristics in the venations and crease patterns revealed in this study could provide an innovative designing method, enabling the integration of structural stability and deformability, and thus could have a considerable impact on engineering science."

The abstract? "Ladybird beetles are high-mobility insects and explore broad areas by switching between walking and flying. Their excellent wing transformation systems enabling this lifestyle are expected to provide large potential for engineering applications. However, the mechanism behind the folding of their hindwings remains unclear. The reason is that ladybird beetles close the elytra ahead of wing folding, preventing the observation of detailed processes occurring under the elytra. In the present study, artificial transparent elytra were transplanted on living ladybird beetles, thereby enabling us to observe the detailed wing-folding processes. The result revealed that in addition to the abdominal movements mentioned in previous studies, the edge and ventral surface of the elytra, as well as characteristic shaped veins, play important roles in wing folding. The structures of the wing frames enabling this folding process and detailed 3D shape of the hindwing were investigated using microcomputed tomography. The results showed that the tape spring-like elastic frame plays an important role in the wing transformation mechanism. Compared with other beetles, hindwings in ladybird beetles are characterized by two seemingly incompatible properties: (i) the wing rigidity with relatively thick veins and (ii) the compactness in stored shapes with complex crease patterns. The detailed wing-folding process revealed in this study is expected to facilitate understanding of the naturally optimized system in this excellent deployable structure."

But back to our little lady beetle in our pollinator garden. It's difficult to catch a lady beetle in flight. They don't fly when you WANT them to, and when they do fly, you and your camera are NOT ready. And when you and your camera ARE ready, all focused and everything, they change their mind or change directions. So, in keeping with our motto, "Don't poke 'em, prod 'em or pin 'em," we waited.

With the morning sun behind her back, LB finally obliged and took flight.

Here's hoping LB will return. She missed a few aphids! 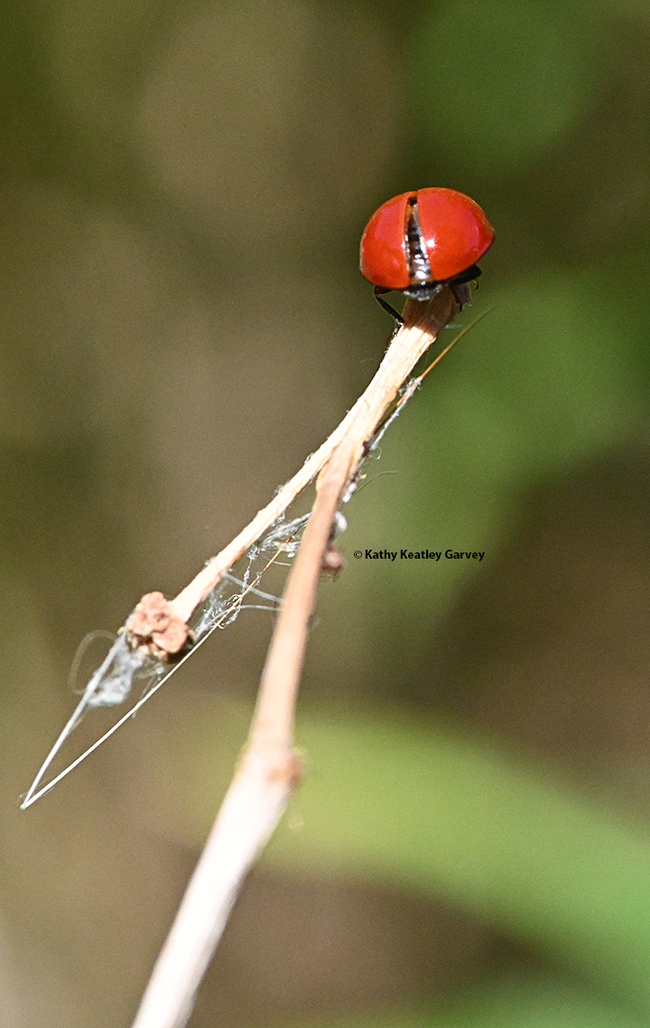 A lady beetle prepares for take-off in a Vacaville pollinator garden. (Photo by Kathy Keatley Garvey) 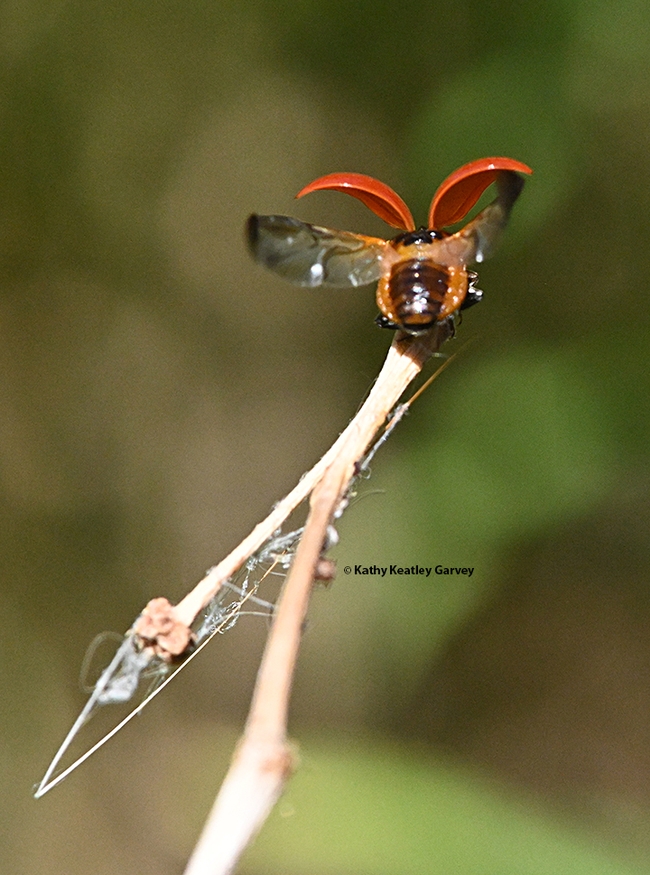 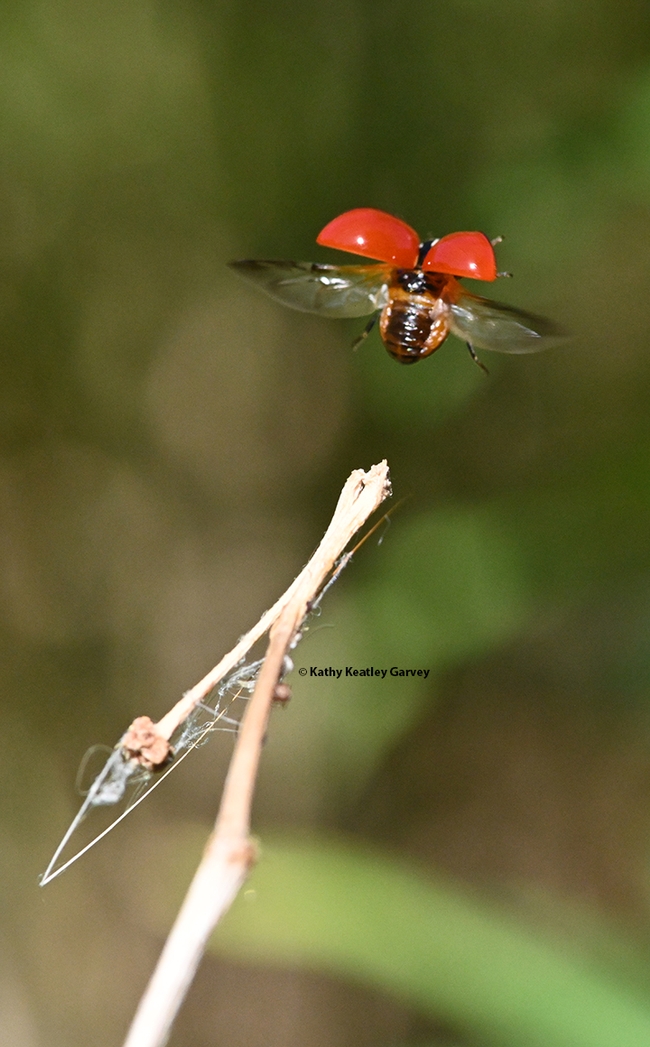