Bug Squad
sitenum=63
Happenings in the insect world
Flight of the Ladybug, The Origami Master

Ladybug, ladybug fly away home
Your house is on fire and your children are gone
All except one, and her name is Ann
And she hid under the baking pan.

So says a traditional nursery rhyme traced back to 1744 when it appeared in Tommy Thumb's Pretty Songbook, according to Wikipedia.  The first version has it as "Ladybird" instead of "Ladybug" and another version has it "Your house is on fire and your children will burn."

The nursery rhyme was meant to be a chant to shoo away the lady beetle (aka ladybug), according to freedictionarycom. It was "an allusion to the practice of farmers burning their fields after the harvest."

Have you ever tried to photograph the split second when a ladybug spreads its wings? It's not easy to do because insects are unpredictable, and you fingers and your camera shutter speed don't always cooperate, either. Beetle blur!

It's a marvelous feat, though.

Writer Joanna Klein said it best in her May 18, 2017 piece in the New York Times: "The ladybug is a tiny insect with hind wings four times its size. Like an origami master, it folds them up into a neat package, tucking them away within a slender sliver of space between its abdomen and the usually polka-dotted, harder wings that protect it. When it is time to take off, it deploys its flying apparatus from beneath its colorful shell-like top wings, called the elytra, in only a tenth of a second. And when it lands, it folds it back in just two. Switching between flying and crawling many times in a day, the ladybug travels vast distances." (See the news story and watch the video on how a ladybug tucks away its wings.)

Yes, the ladybug is an origami master. 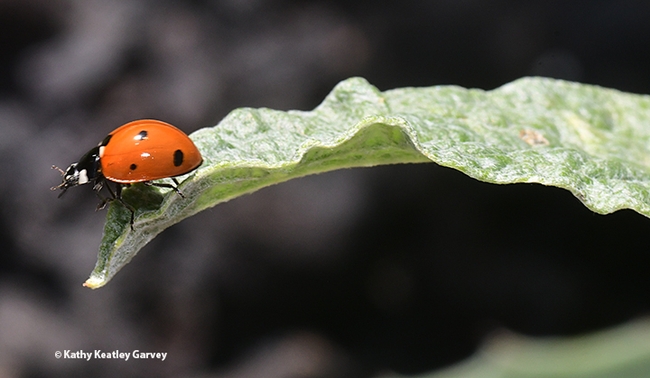 This lady beetle, aka ladybug, appears to ponder its next move. (Photo by Kathy Keatley Garvey) 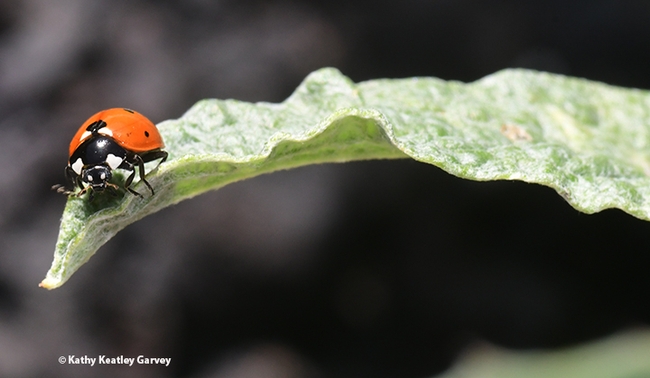 Which way to go? Or to go at all? Decisions, decisions. (Photo by Kathy Keatley Garvey) 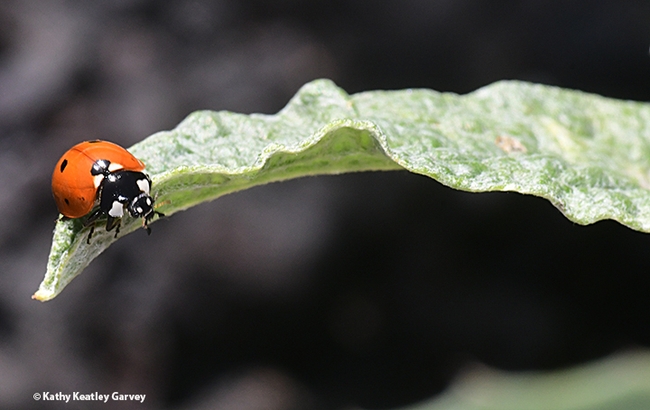 The ladybug decides to back up a bit. (Photo by Kathy Keatley Garvey) 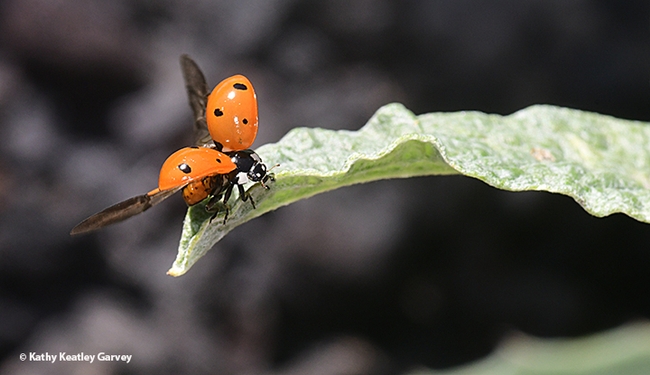 Many a novice gardener has glanced at them, smashed them, and yelled "Gotcha! Now stay outta my garden, y'hear?

They are not your enemy.

And if there are kids in your family, show them this time-lapse video of the Ladybug Life Cycle by TSST. That would be "The Kid Should See This."

"One ladybug can eat up to 5,000 insects in its lifetime!" says TSST. "Most ladybugs have oval, dome-shaped bodies with six short legs. Depending on the species, they can have spots, stripes, or no markings at all."

Spoiler alert: You can't say that "no animals were harmed in the making of this video." Yes, there's some cannibalism. It's not good to be the last egg hatched. 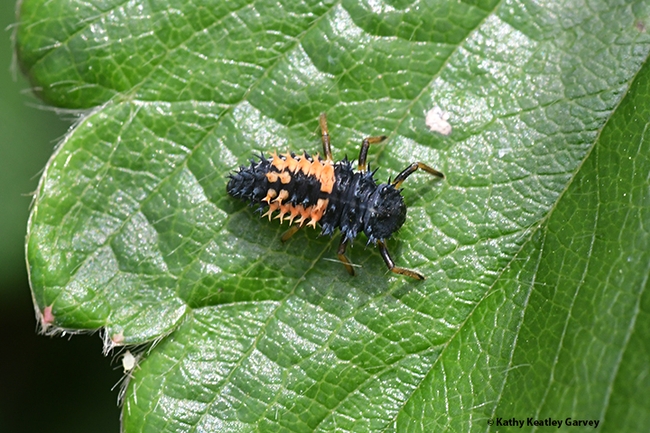 Dorsal view of the larva of a lady beetle, aka ladybug, on a strawberry plant in Vacaville, Calif. (Photo by Kathy Keatley Garvey) 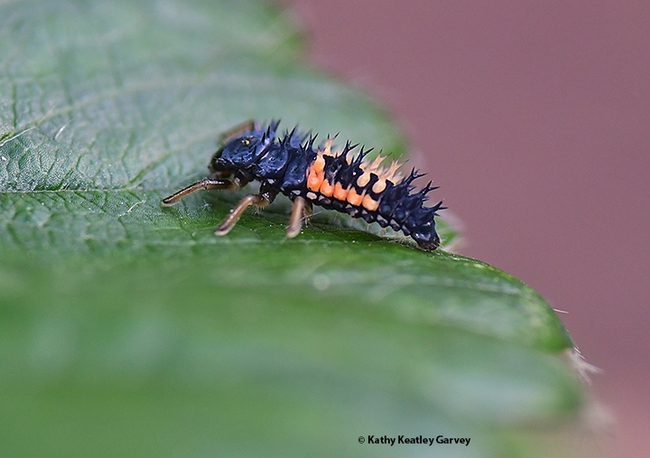 Side view of a lady beetle (aka ladybug) larva. (Photo by Kathy Keatley Garvey) 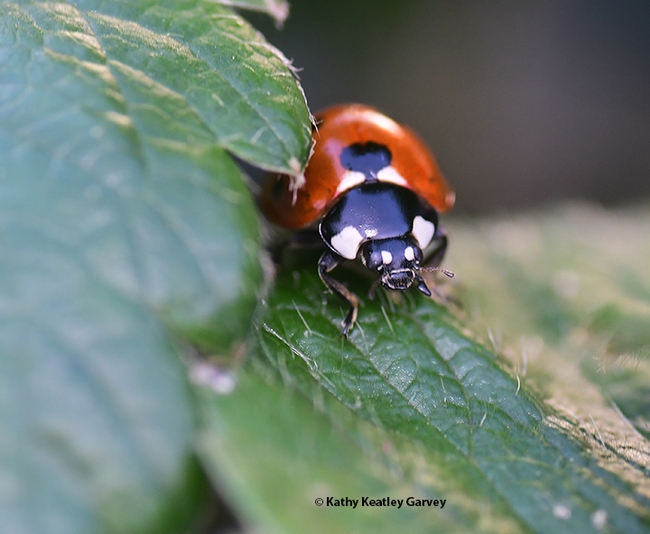 If you're an entomologist, an agriculturist, a gardener or an insect enthusiast, you've probably seen the life cycle of a lady beetle, aka ladybug: from the egg to the larva to the pupa to the adult.

You may have missed the pupal stage when the adult emerges--or mistaken the pupal case for something dead (what's that carcass?) or something regurgitated.

Lady beetles, from the family Coccinellidae, are beneficial insects (some 5000 species) that feast on aphids and other soft-bodied insects.  Entomologists call them lady beetles because this insect is not a true bug.

Scores of lady beetles visit our little pollinator garden in Vacaville. They especially like the narrow milkweed, Asclepias fascicularis.  Want to see a video on the life cycle? Watch The Stunning Life Cycle Of A Ladybug | The Dodo on YouTube. 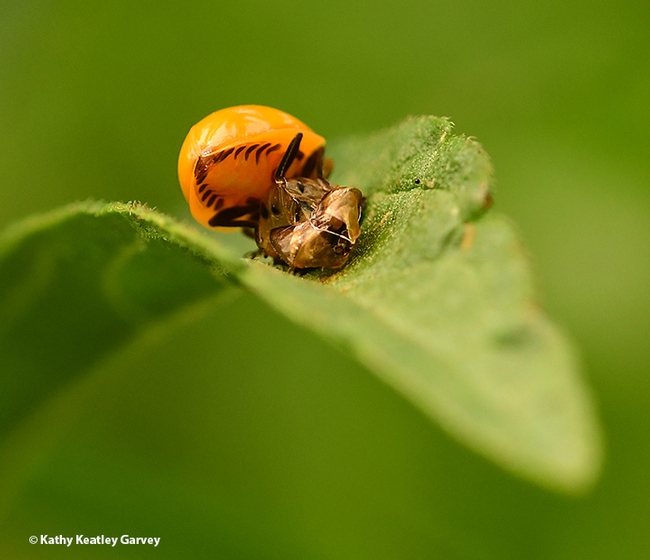 Welcome to the world! A lady beetle, aka ladybug, emerges from its pupal case. (Photo by Kathy Keatley Garvey) 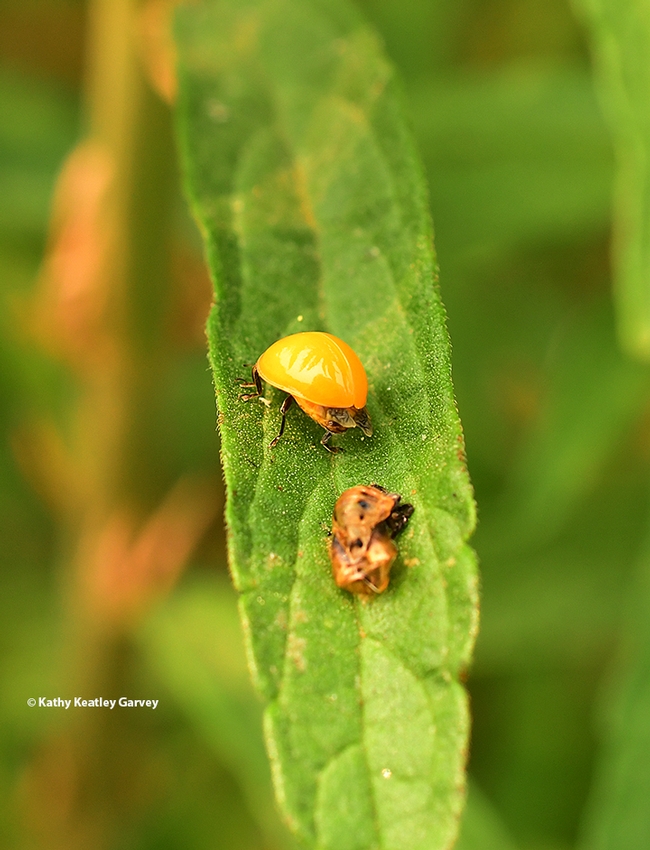 The lady beetle, aka ladybug, heads up the leaf, leaving its pupal case behind. (Photo by Kathy Keatley Garvey) 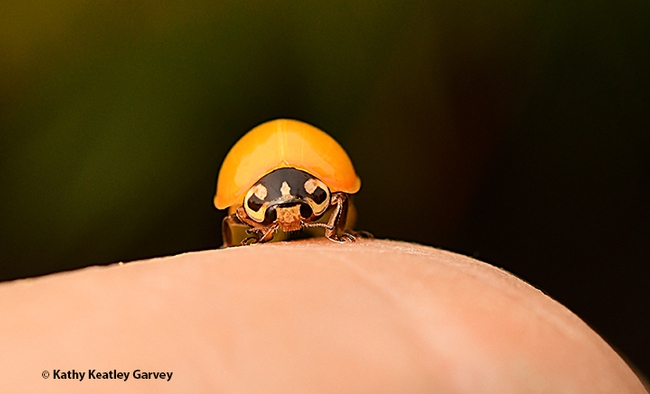 If you have roses blooming in your yard in the winter--or trying to bloom--check to see if there's a lady beetle, aka ladybug prowling around.

A lady beetle can eat as many as 5000 aphids in its lifetime, so they're the good guys and gals in the garden.

"These beetles have become a cultural icon of sorts because of their appearance and their beneficial habits," writes UC Davis professor Lynn Kimsey, director of the Bohart Museum of Entomology, in her insect fact sheet on Lady Bugs and Lady Beetles. "Both adults and larvae feed on aphids and other small, soft-bodied insects...They are ferocious predators on small insects."

Lady beetles do have predators, though, despite (1) their bright red "warning" coloration that yells "Hey, wait, don't eat me! I don't taste good!" and (2) the toxic chemical, isopropyl methoxy pyrazine, that oozes from their joints when they're disturbed.

Ever seen that? We did one summer when a cellar spider nabbed a lady beetle in its web and began eating it.

It probably didn't eat it all... 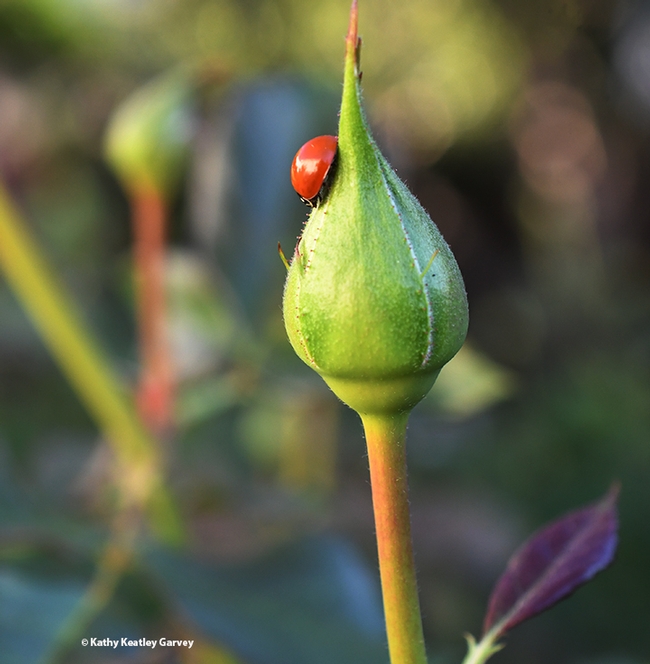 A lady beetle searching for aphids on a rosebud in the winter. (Photo by Kathy Keatley Garvey) 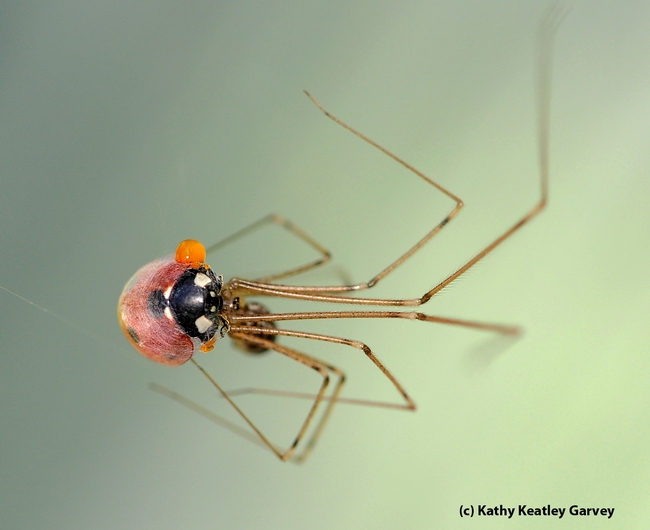 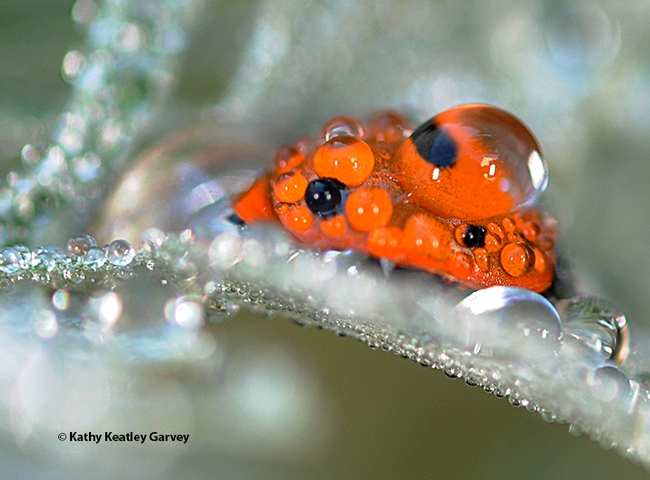