Eric Mussen, one year old in 1945. (Courtesy of the Mussen family)
It was incredible.

The Celebration of Life and Legacy of UC Cooperative Extension apiculturist emeritus Eric Mussen, held Aug. 28 in the Putah Creek Lodge, UC Davis, drew a standing-room only crowd who shared and applauded the many facets of his life: family man, bee scientist, athlete, angler, birder, photographer, humorist and a singer (doo wop).

They all remembered that engaging smile, a smile that could melt frozen ice cream (a dessert he loved).

Members of California's beekeeping and almond industries--Team Eric--came out in force to honor their hero, their mentor, their confidant, their friend. Some traveled from as far away as Washington state and Idaho.

Dr. Mussen, who preferred to be called "Eric," was an internationally known 38-year Extension apiculturist and an invaluable member of the UC Davis Department of Entomology and Nematology faculty since 1976. He died Friday, June 3 in his Davis home at age 78 from aggressive liver cancer.

Although Eric retired in 2014, he continued his many activities until a few weeks prior to his death. For nearly four decades, he drew praise as “the honey bee guru,” “the pulse of the bee industry" and as "the go-to person" when consumers, scientists, researchers, students, and the news media sought answers about honey bees. Colleagues described him as the “premier authority on bees and pollination in California, and one of the top beekeeping authorities nationwide,” “a treasure to the beekeeping industry," and "a walking encyclopedia when it comes to honey bees.” Among who sought his expertise: The Lehrer Hour, BBC, Good Morning America, National Public Radio (Science Friday), The New York Times,  Boston Globe,  and The Los Angeles Times.

The Aug. 28th celebration opened with a welcome by Steve Nadler, professor and chair of the UC Davis Department of Entomology, who introduced Chancellor Gary May.

"Eric was a cherished friend to everyone here, to the UC Davis community, to his colleagues, to scientists and researchers, to agricultural growers and 4-H-ers, and to beekeepers and bee enthusiasts everywhere," the chancellor told the crowd. "He meant so much to the university and his work benefited us all. He represented the absolute best of UC Davis. He was an internationally recognized expert, dedicated to his work, and passionate about helping others and making the world a better place to be. His legacy will endure. It will endure through his research contributions and extension activities that served beekeeping operations across California and the nation. It will endure through the practices he helped put in place, sharing information with beekeeping groups. It will endure through the next generation of apiculturists he helped inspire. We'll remember his impact as the 'honey bee guru.' Much more than that, Eric will be remembered for his generosity, his kindness and his passion."

Emcee Gene Brandi, an icon in the bee industry and a family friend,  served with Eric for 37 of his 39 years on the California State Beekeeping Association's Board of Directors. He currently chairs the Foundation for the Preservation of Honey Bees, Inc., and also served as president of American Beekeeping Federation and chaired both the California Apiary Board and National Honey Board.

One of Gene's many memorable comments: “To paraphrase a good friend of mine, (beekeeper) John Miller, “The people who really make a difference in this life are those who make things better. Eric Mussen made things better for the honey bee, beekeepers and the entire beekeeping industry and for that we are very grateful.” Eric Mussen as a football player at Natick (Mass.) High School. Eric received his bachelor's degree in entomology from the University of Massachusetts (after declining an offer to play football at Harvard) and then obtained his master's degree and doctorate in entomology from the University of Minnesota in 1969 and 1975, respectively. (Photo courtesy of the Mussen family)
Son Dr. Timothy "Tim" Mussen described his father as "a strong, caring and reliable man who devoted his life to serving as a scientific expert in his field...it was clear to me that my father cared deeply for both of his families: his biological family at home and his professional bee biology family...If he were to provide some life advice, it would probably be:  First, to pursue your interests. Second, to cherish your time that you have together. And the third would be to save the bees."

There were scores of memorable comments from the speakers: A bee-themed cake, decorated with a skep and bees, was the work of CreaTions 'N Events of Sacramento. (Photo by Kathy Keatley Garvey)
Another highlight: Performances by the Tune Up doo wop group of Davis, directed by Bill Cavins, with Frank Fox as emcee.  Selections included "Buzz, Buzz, Buzz," "Duke of Earl," "All I Have to Do Is Dream," "Barbara Ann"  and "Hallelujah." Commented one attendee: "That looks like so much fun. No wonder Eric loved singing doo wop."

Adding to the celebration: a memory table from the Mussen family; bee pins to all the guests from the National Honey Board; a bee observation hive display from UC Extension apiculturist Elina Lastro Niño, director of the California Master Beekeeper Program (CAMPB), and Wendy Mather, program manager of CAMPB; honey straw donations from JoshuaZeldner, Amina Harris of Z Specialty Food, LLC; and ice cream donations from Haagen-Dazs (HD). Eric worked closely with HD especially during the colony collapse disorder phenomenon and the installation of the UC Davis Bee Haven on Bee Biology Road, UC Davis.

Olive and Vine of UC Davis catered the event. CreaTions N' Events of Sacramento provided a bee-themed cake, complete with a skep and honey bees.

"The world," said Dr. Leal, a former chair of the Department of Entomology who knew Eric well, "is a lesser place without Eric."

Eric is survived by his wife, Helen Mussen, sons Timothy Mussen (Noelle) of Rancho Cordova, and their children Amber and Alex;  Christopher Mussen (Jacqueline Silva), of Davis; his younger brother Alan Mussen (Lynda) and their daughter, Allie and husband, Nick Arnold, all of Peru, N.Y.; and other relatives in New York and Michigan.

Memorial contributions may made to the California State 4-H Beekeeping Program, with a note, "Eric Mussen Memorial Fund." Checks may be be made out to: 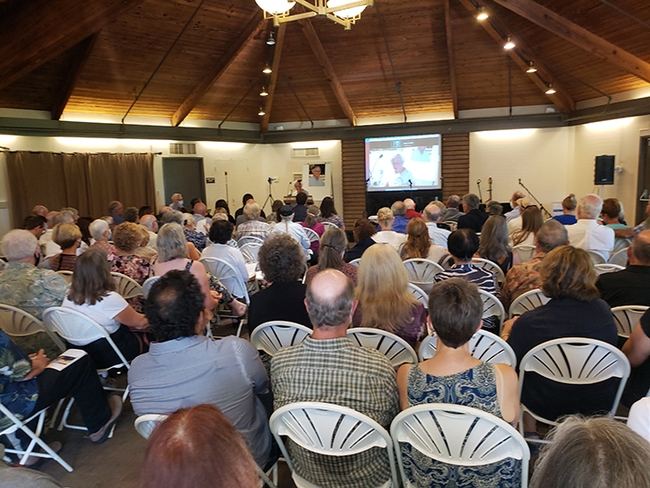 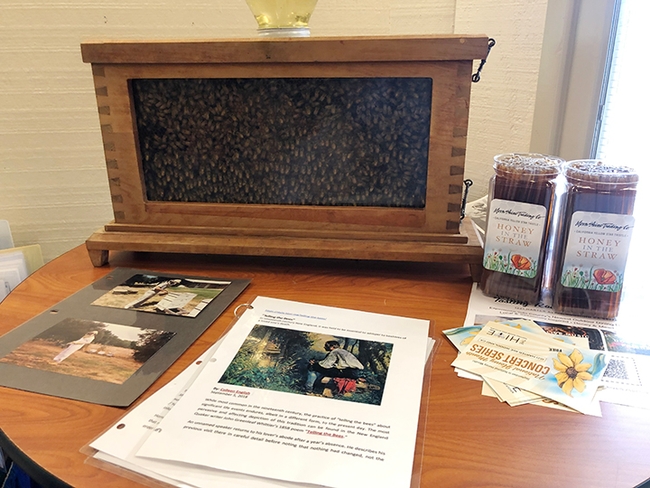 A bee observation hive at the Eric Mussen memorial commemorated his love of honey bees. (Photo by Kathy Keatley Garvey) 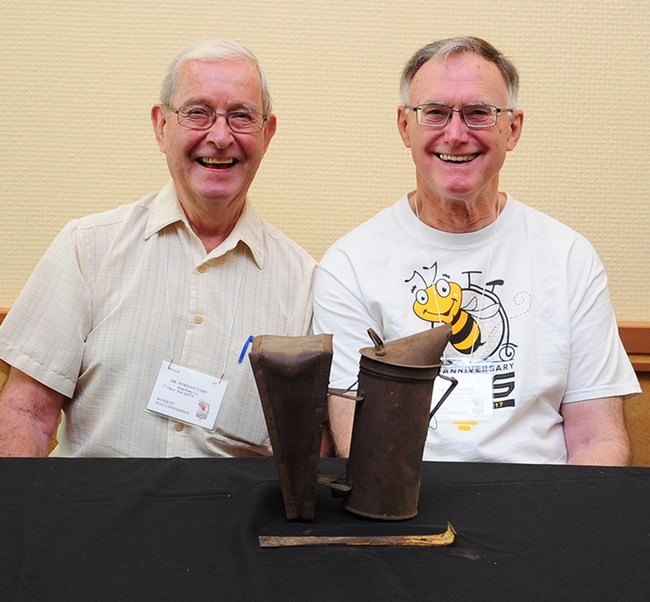 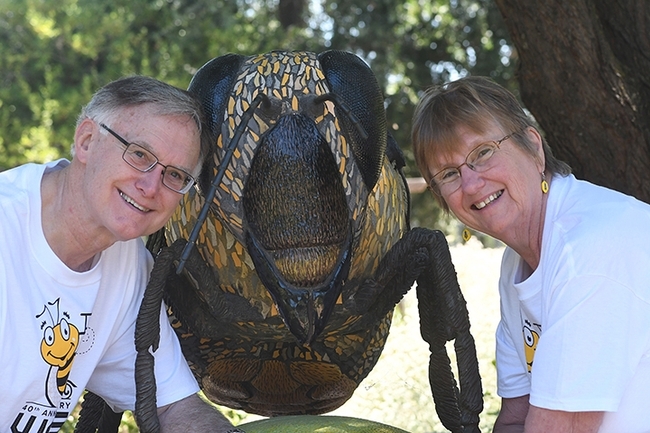