The video guidebook showcases the 480-page textbook, Biodemography: An Introduction to Concepts and Methods (Princeton University Press, 2020),  co-authored by Deborah Roach, professor and chair of the University of Virginia's Department of Biology. Carey and Roach define the pioneering field of biodemography as “integrating biology, mathematics and demography.”

The video guidebook, now online on the UC Berkeley Population Sciences website, is unique in that never before has a scientific textbook author produced, scripted and narrated videos that encompass a book's entire content. The playlist includes 175 separate presentations, closed captioned in English and subtitled through YouTube in 300 different languages. The video guidebook covers the contents of his entire biodemography book with video modules on content ranging from life tables, mortality models and reproduction to stable population theory, matrix models and applied demography. He also has several dozen videos on best practices in visualization and presentation strategies.

Carey, a member of the UC Davis Department of Entomology and Nematology faculty since 1980 and a senior scholar with the UC Berkeley Center on the Economics and Demography of Aging (CEDA), opted to create the video playbook because “we believe the contents should be available to anyone interested in any aspect of biodemography regardless of their access to the book or their primary language.”

Carey is a fellow of four professional societies: the Entomological Society of America, the American Association for the Advancement of Science, the California Academy of Sciences, and the Gerontological Society of America. He is former director (2003-13) of a 11-university consortium funded by the National Institute on Aging (NIH/P01) on the evolutionary ecology of lifespan. 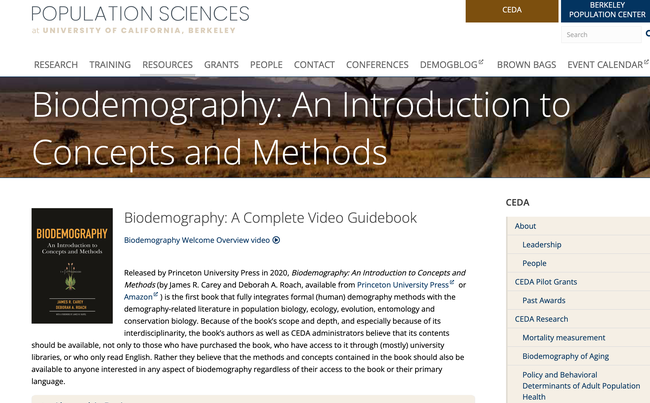