A beautiful male glided into our Vacaville garden late yesterday and made himself at home on our Mexican sunflowers, Tithonia rotundifola.

He claimed the patch--"mine, all mine, all mine!"--until a honey bee buzzed by looking for nectar.  When the bee edged too close for his comfort, Mr. Monarch relinquished his blossom and simply fluttered to another one.

Backlit against the setting sun, the monarch's iconic colors gleamed. It was a magical moment.

Mr. Monarch is on his way to an overwintering site, perhaps Pacific Grove. KSBW, a Salinas television station, announced that the first weekend count at the Monarch Sanctuary in Pacific Grove revealed that the monarchs are returning in "large numbers."

Large numbers? The tally on Friday, Oct. 21 totaled 3,823. "In 2021, only one butterfly was seen," the news story related. "In 2021, only one butterfly was seen. In 2020, zero butterflies entered the sanctuary during their entire annual migration. At the beginning of the year, the Xerces Society reported that 247,237 monarch butterflies were observed across the West which amounts to more than a 100-fold increase from 2020 which saw fewer than 2,000 monarchs."

Entomologist David James of Washington State University, who studies migratory monarchs (citizen scientists in the Pacific Northwest tag them) reported Oct. 15 on his Facebook page, "Monarch Butterflies in the Pacific Northwest," that "We now have our fifth long distance tagged Monarch recovery! Remarkably this one came from the same release as the previous one! So, two recoveries from a group of Monarchs reared and released by Gillian Gifford Short on September 28 in Ruch, Oregon. The first recovery (G6797) was found in Trinidad, CA about 100 miles SW from Ruch. The latest recovery (G6800) was found yesterday, October 14 in San Rafael, CA by Kelly...This individual did not fly coastward, instead flying almost due south for 295 miles. Still not done migrating, it likely has another 100 or so miles to go before it reaches a coastal overwintering site." 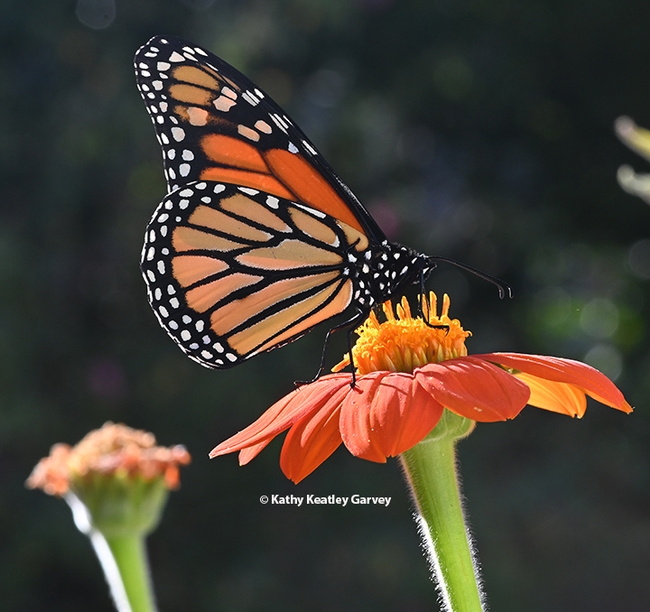 A male monarch nectaring on a Mexican sunflower, Tithonia rotundifola, on Monday, Oct. 24 in a Vacaville garden. (Photo by Kathy Keatley Garvey) 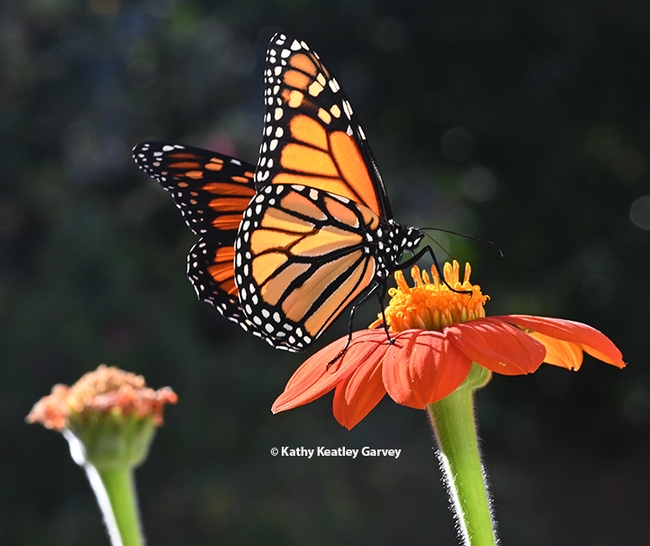 The nectar from the Tithonia is flight fuel for its journey an overwintering site along the California coast. (Photo by Kathy Keatley Garvey) 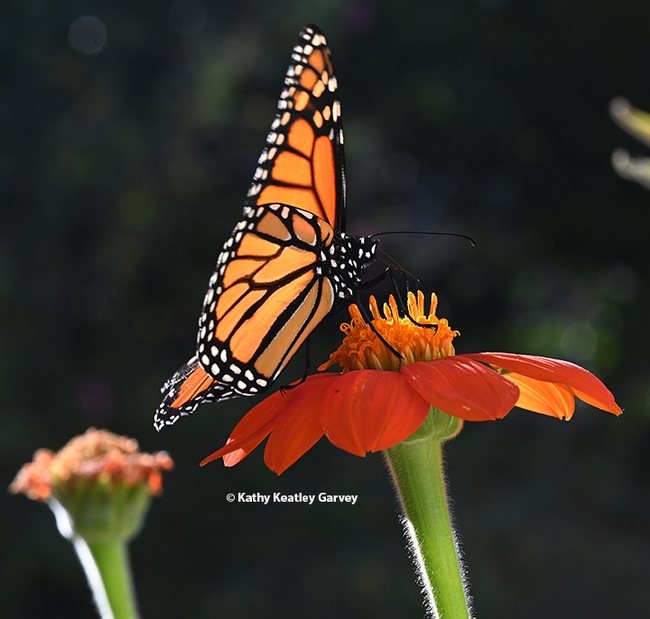