A praying mantis comes to life. (Photo by Gale Okumura)
An Entomology (ENT) 001 art show, "Insects in the Anthropocene," will be hosted by UC Davis Department of Entomology and Nematology faculty members Emily Meineke and Diane Ullman from 4:30 to 6:30 p.m., Tuesday, Nov. 29 in the Labudio (lab+studio).

The Labudio is located in Room 128 of the Environmental Horticulture Building, 200 Arboretum Drive, UC Davis.

The public is invited. "Please bring a t-shirt if you'd like to screen print one of our designs on it, too," they said. "Kids can make shirts, too. The event will be indoor/outdoor, so please dress accordingly." No reservations are necessary.

"The students were each assigned an insect species in decline or moving about the planet and becoming invasive in new habitats," said Meineke, an urban landscape entomologist and assistant professor. "The insects students were assigned are among those most impacted by humans, and students were given an opportunity to re-envision how people might interact more gently and intentionally with insects, our small, yet consequential co-inhabitants."

"We are so proud of how the students interacted with this topic," Meineke said. "They were charged with researching their insects and turning that research into designs that could be screen printed on watercolor paper, ceramic tiles to be installed in Briggs 122, and fabric. Their designs are nothing short of spectacular!"

UC Davis distinguished professor Diane Ullman, an artist and entomologist, "helped immensely," said Meineke, adding that she wasn't "an official co-teacher but she essentially acted as one." Meineke was among the scholars and artists who helped spearhead the newly created Harvard Museum of Natural History's “In Search of Thoreau's Flowers: An Exploration of Change and Loss," hailed as an examination of the natural world and climate change at the intersections of science, art and history.  She helped launch the project in 2017 when she was a postdoctoral fellow at the Harvard University Herbaria. The 648 plant specimens that Henry David Thoreau donated to the museum form the foundation of the exhibit. It opened to the public May 14.

A native of Greenville, N.C., Meineke joined the UC Davis Department of Entomology and Nematology on March 1, 2020, from the Harvard University Herbaria. As a National Science Foundation postdoctoral fellow, she studied how urbanization and climate change have affected plant-insect relationships worldwide over the past 100-plus years.

She received her bachelor of science degree in environmental science, with a minor in biology, in 2008 from the University of North Carolina, Chapel Hill. She obtained her doctorate in entomology in 2016 from North Carolina State University. UC Davis distinguished professor Diane Ullman
Distinguished Professor Diane Ullman
Professor Ullman, a celebrated teacher,  artist and researcher, is the 2014 recipient of the Entomological Society of America (ESA) National Excellence in Teaching Award and the UC Davis Academic Senate's 2022 Distinguished Teaching Award for undergraduate teaching. She is a fellow of both the American Association for the Advancement of Science (2014) and the ESA (2011).

When she was singled out for the UC Davis Academic Senate Award, her nominators praised her as providing "superb teaching and mentoring for many years, not only in the Department of Entomology and Nematology but as a leader in the Science and Society program. She has brought art-science fusion alive in innovative ways. Her nominees and students rave about her deep dedication, care, and knowledge in all teaching interactions, as well as her overall commitment to student success. One student nominee summed it up: "My experience in her course last spring was one that lifted my spirits, enriched my education, and strengthened my love for art and science during a time when it was difficult to feel positive about anything.”

Ullman's research encompasses insect/virus/plant interactions and development of management strategies for insect-transmitted plant pathogens. She has worked with many insect vector species (thrips, aphids, whiteflies, leafhoppers, mealybugs) and the plant pathogens they transmit, including viruses, phytoplasma and bacteria.

One of her latest art projects--with colleagues, UC Davis students and community members--is the Sonoran Dreams Art Project in the Garden Apartments of the University Retirement Community,  Davis.  Handmade ceramic tiles depicting the flora, fauna and symbols of the Sonoran Desert surround the elevator.

Ullman received her bachelor of science degree in horticulture from the University of Arizona and her doctorate in entomology from UC Davis in 1985. She joined the UC Davis faculty in 1991 after serving as an associate professor of entomology at the University of Hawaii. Her credentials include: chair of the UC Davis Department of Entomology, 2004-2005; associate dean for undergraduate academic programs for the College of Agricultural and Environmental Sciences, 2005 to 2014; and co-founder and co-director of the UC Davis Art/Science Fusion Program, launched in September 2006. 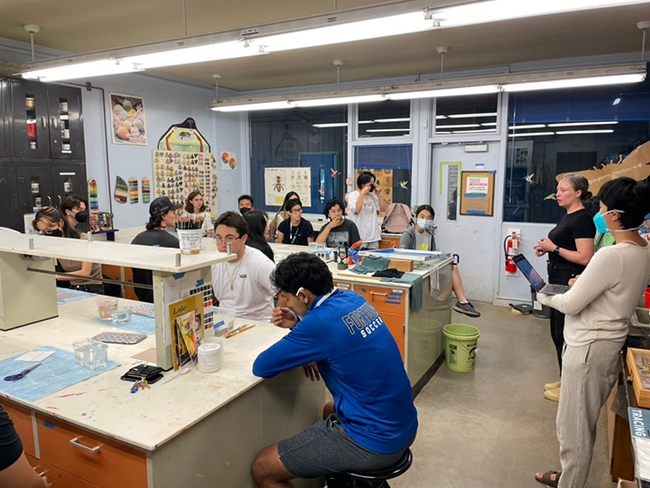 Under the direction of assistant professor Emily Meineke, students work in the Labudio (lab+studio) space in Room 128 of the Environmental Horticulture Building. (Photo by Gale Okumara) 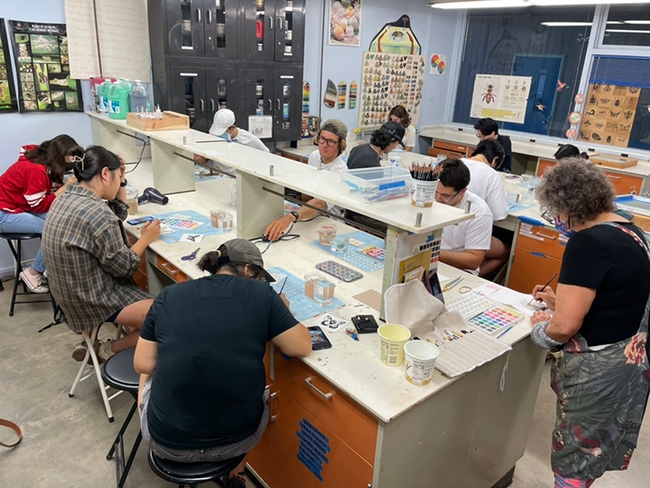 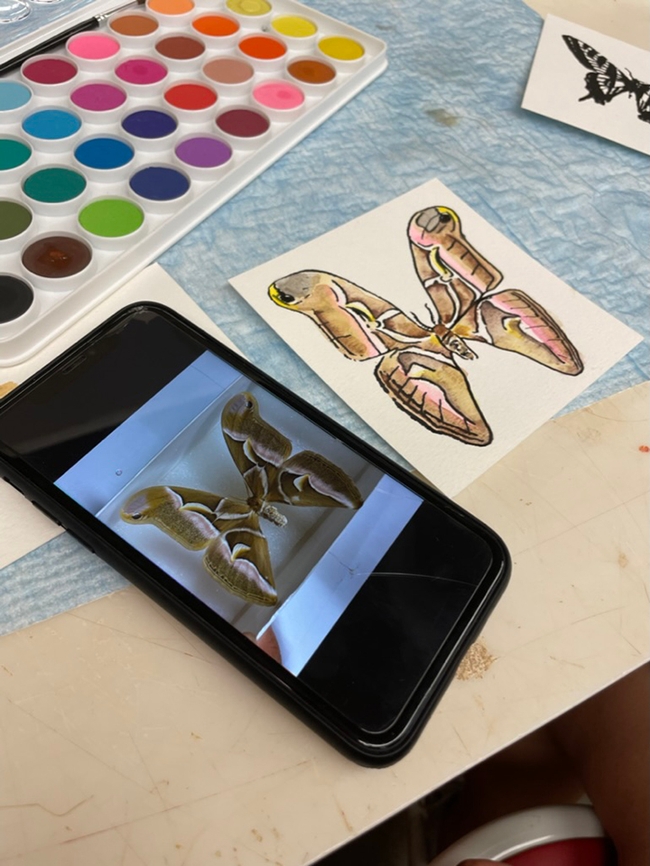 The art is almost complete. (Photo by Gale Okumura) 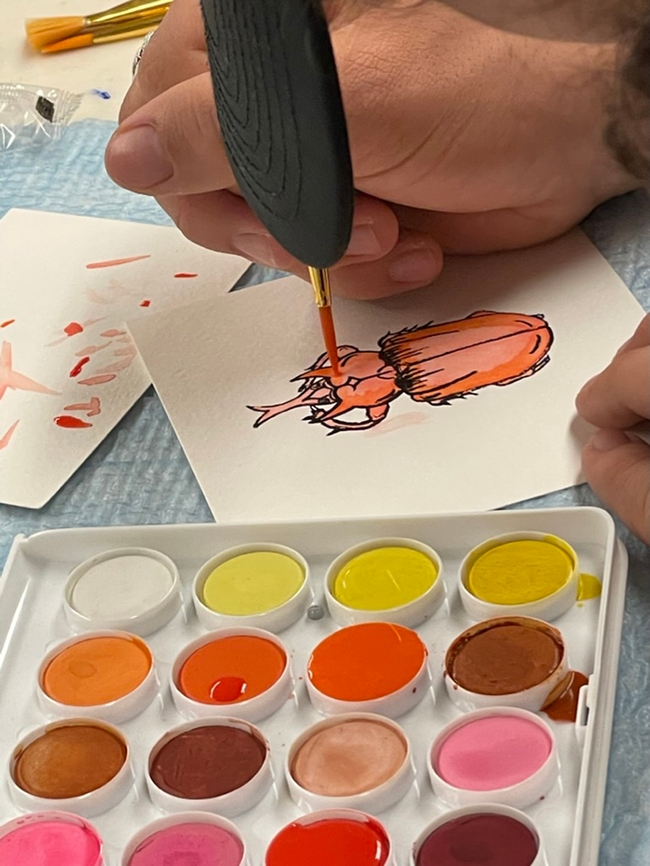