Bug Squad
sitenum=63
Happenings in the insect world
Honey! Look What UC Davis Is Offering in the Way of Mead and Honey Classes Amina Harris, director of the UC Davis Honey and Pollination Center (Photo by Kathy Keatley Garvey)
One of my fondest memories of my beekeeper father: Mixing warm butter and golden honey and spooning it onto freshly baked (homemade) yeast bread.

Nothing is better than this!

A glass of mead. (Photo by Kathy Keatley Garvey)
How much do you know about honey? About mead (honey wine)? How much would you like to learn?

Amina Harris, director of the UC Davis Honey and Pollinator Center at the Robert Mondavi Institute, is actually the "queen bee" of this organization but she's also a worker bee. She's scheduled two mead workshops in February, and a series of three honey exploration classes--exploring honey in California, United States and the world--in February, March and April.

Want some hands-on experience? This hands-on course will feature small learning groups, each with its own UC Davis leader and a talented mead maker. Groups of 5-6 will follow a basic mead recipe. Finally, students will bottle the mead made in previous workshops. The bootcamp is from 8 a.m. to 4 p.m., Feb. 2 in the Robert Mondavi Institute, LEED Platinum Winery  Event Details

Brewers and winemakers alike know that the buzz in the world of alcoholic beverages is all about mead. Explore this fascinating fermented beverage from its rich history to its recent rebirth in America. Taste and learn the styles, ingredient selection, and steps to making good mead. This is from 8 a.m. to 5 p.m., Feb. 3-4 in the Sensory Theater, Robert Mondavi Institute, located at 392 Old Davis Road, Davis. Event Details A cordovan honey bee, as golden as they come. (Photo by Kathy Keatley Garvey)

This is the first in the series of three classes. You can taste the honeys of California while learning about the unique characteristics of each varietal, Harris says. The honeys will be paired with a selection of cheeses from throughout the state. The first class is from 5:30 to 7 p.m., Feb. 8 in the Sensory Theater, Robert Mondavi Institute. As earlier mentioned it's located on 392 Old Davis Road, Davis. Event Details

The second of the three classes in the Honey Exploration Series is from 5:30 to 7 p.m., March 22 in the Sensory Theater, Robert Mondavi Institute. Event Details The last of the three classes in the Honey Exploration Series means "traveling the world through your taste buds."  You may not have traveled much, but you'll taste honey from Brazil, Australia, Europe and perhaps even a tiny bit of the rare Melipona, a genus of stingless bees.  (Factoid from Wikipedia: "The largest producer of honey from Melipona bees in Mexico is in the state of Yucatán where bees are studied at an interactive park called 'Bee Planet' which is within the Cuxtal Ecological Reserve. The class is set for 5:30 to 7 p.m., April 25 in the Sensory Theater, Robert Mondavi Institute. Event Details

You can also sign up to receive the Honey and Pollination Center's newsletter here.

The Honey and Pollination Center aims to help UC Davis " to become the world's leading authority on honey bee health, pollination, and honey."

Now about that honey-butter....how many more minutes until that loaf of yeast bread comes out of the oven? 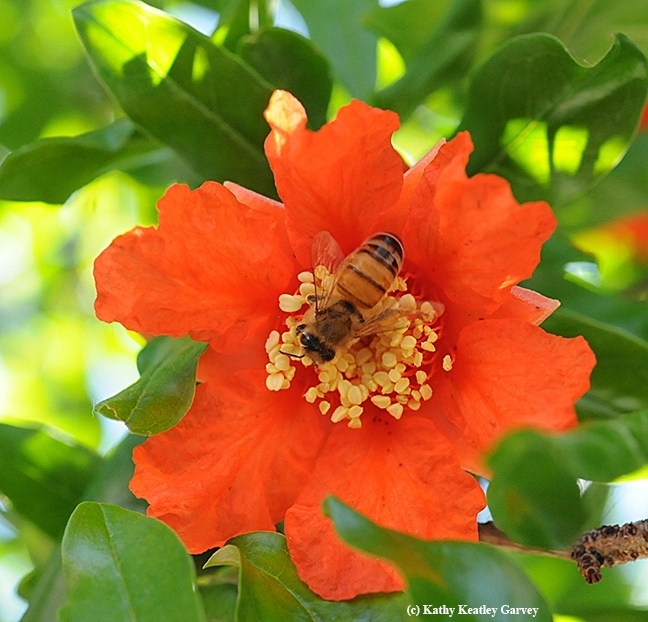 A honey bee gathers nectar and pollen from a pomegranate blossom. (Photo by Kathy Keatley Garvey) 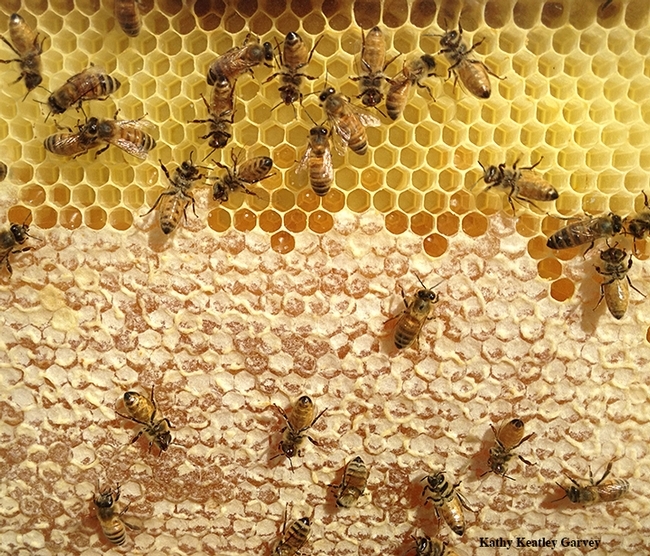 Honeycomb from a productive bee colony as soon through the glass of an observation hive. (Photo by Kathy Keatley Garvey) 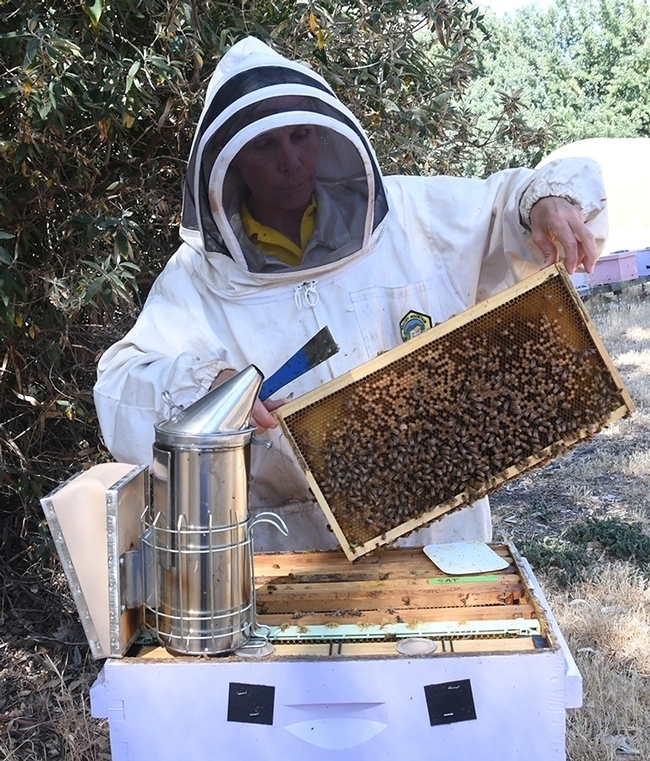