The University of California Cooperative Extension (UCCE) recently co-hosted a field trip with the U.S. Forest Service to view the implementation of a forest fuels reduction project on the Tahoe National Forest.

Over 45 stakeholders, including representatives of state, federal, and local government, industry and environmental groups and local residents attended to see the project, known as the "Last Chance Project," which involves thinning the forest by removing small and medium-sized trees, masticating or mowing down brush, and burning dead material through prescribed fire. The work, being done by Sierra Pacific Industries, under contract to the U.S. Forest Service, should be completed by fall 2012. University of California scientists and UCCE have teamed up with the U.S. Forest Service to provide independent third-party research on the project to determine its effects on forest health, fire behavior, wildlife, water quality and the public through the Sierra Nevada Adaptive Management Project (SNAMP).

The forest research team including Brandon M. Collins, now employed by the U.S. Forest Service Pacific Southwest Research Station as a research fire ecologist, collected data before the Last Chance project began to determine its likely effectiveness at improving the health of trees and reducing the potential for destructive high intensity wildfire. Collins led the effort to use computer models to determine how the Last Chance project, as proposed, will affect fire behavior across the surrounding landscape up to 30 years after completion. Additionally, other hypothetical treatments limiting the diameter of trees removed to different sizes were modeled to assess how effective the project will be at reducing fire severity.

The team sampled 199 forest plots and collected data, such as tree species, vigor, and diameter at breast height (dbh). Tree core samples were collected so the growth of tree rings can be determined to characterize tree productivity at each plot. Downed material, including branches, twigs, pine needles and decomposed organic material, were measured along with woody shrubs. Fuel loads were calculated using standard protocols.

This data was then entered into the Forest Vegetation Simulator (FVS) with the Fire and Fuels Extension to model the planned treatments and grow forest stands within the study area for several decades. Using a command line version of FlamMap, called Randig, and weather information from the Duncan Peak Remote Automated Weather Station, scientists simulated 5,000 randomly placed fire ignitions to model conditional burn probabilities, which are the chance occurrences of a pixel burning given an ignition within the study area under modeled weather conditions. Simulated, conditional burn probabilities across the Last Chance landscape (By Brandon M. Collins)
Results from that modeling show that fuels treatments as planned for the Last Chance project will be effective at reducing fire behavior not only within treated areas, but also in adjacent areas. Differences in modeled fire behavior, when different limits on the diameter of trees removed were modeled, were slight. This suggests that the key to effective reductions in the probability of more hazardous fire occurrence at the landscape scale is treating surface fuels and thinning ladder fuels, and that the diameter of the trees removed is less important.

Changes in design of fuels treatments project often occur during implementation when unexpected conditions occur. Therefore, post-treatment forest plot data will be collected again beginning in Fall 2012 to better characterize the treatment as implemented, and to re-examine the effectiveness of the modeling results. 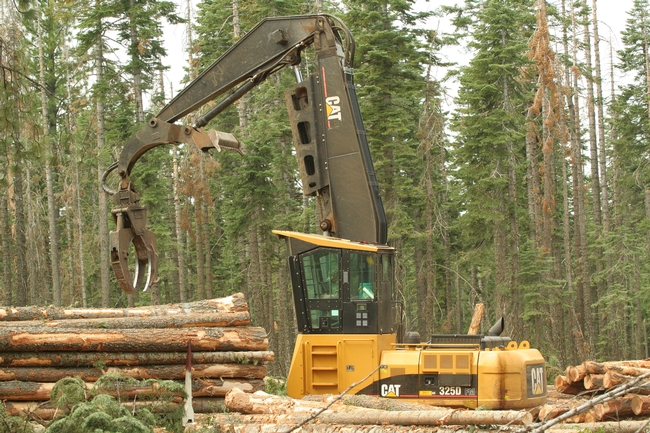